This system could not only save you money — it could help you earn it. 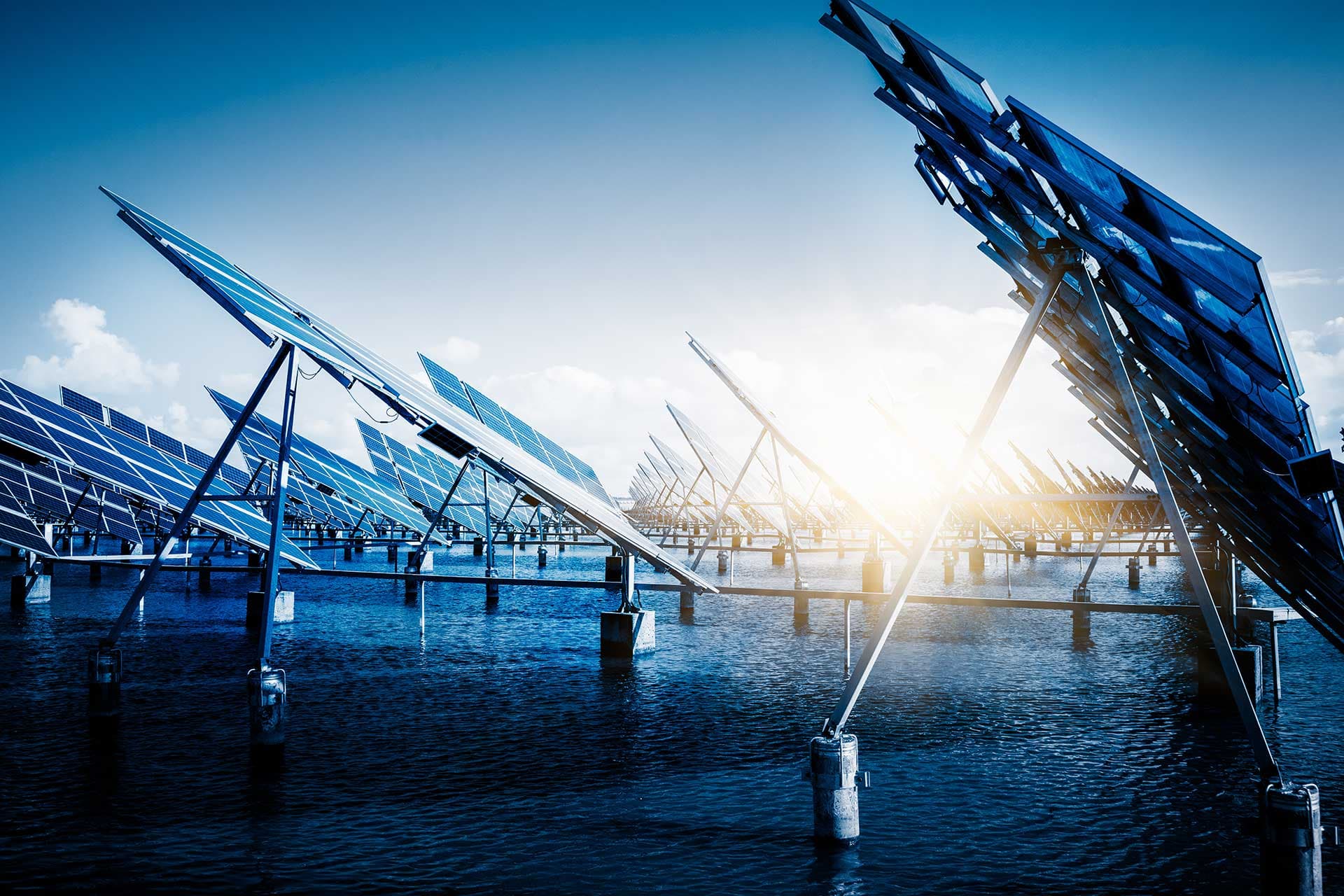 Climate change is arguably the greatest challenge facing the modern world. It's wreaking havoc on our environment, our health, and our economy, and while the scientific community is in near-complete agreement that human reliance on fossil fuels is at the center of the problem, ending that dependency is easier said than done.

Over the past 150 years, we've become dependent on coal, petroleum, and other fossil fuels to power our homes, businesses, and automobiles. The burning of these fuels in ever greater amounts over the past century and a half has resulted in an increase in the concentration of carbon dioxide (CO2) in our atmosphere from 280 parts per million to 400 parts per million.

For our planet, that has meant warmer temperatures, which translate into melting ice sheets, rising sea levels, ocean acidification, and a host of other problems. The amount of money the U.S. now spends battling the health impacts of fossil fuels and climate change caused natural disasters has almost tripled since the 1980s, and the situation has gotten so bad that the planet is now uninhabitable for some species. Experts such as Stephen Hawking warn that humans could be following close behind if significant changes aren't made now.

Thankfully, the number of governments, corporations, and individuals across the globe who recognize this devastating problem continues to grow. Even better, they're attempting to end humanity's dependence on fossil fuels by turning to renewable alternatives.

Sources such as solar, wind, and hydroelectricity are breaking usage records across the globe, and the U.S. is now home to more than 1,000 utility-scale wind projects and 2,200 hydropower plants. Solar, in particular, is thriving. The average price of a residential solar system is plummeting, and in some regions, they're even economically a net positive, paying for themselves. Additionally, today's solar panels are more attractive and efficient than ever before.

Residential batteries are also becoming more efficient, allowing homeowners to store energy for use when the Sun isn't shining or during outages. This stored energy can also be sold back to the grid in times of need, which can provide electricity to customers at a more economically friendly price point. As more of these batteries hit the market, competition will continue to drive their price down as well.

Unfortunately, the current power grid has not kept up with advancements in residential clean energy generation.

In areas where large numbers of people are using solar panels to power their homes, the excess supply can simply be too much for the existing infrastructure to handle. If too much excess energy is pumped into it, a situation known as overvoltage may occur. This can damage equipment, lead to reliability issues, or even cause safety concerns. Worst of all, the problem can slow adoption of renewable energy systems — something the planet simply cannot afford.

Oahu, Hawaii, is a perfect example of this problem's effect on the solar market. Hawaiian Electric Co. (HECO) was having trouble coping with the stress solar energy placed on their grid, so the utility started requiring contractors and residents to apply for permission to connect their solar panel systems to the grid. This caused the number of new installations to drop by roughly 50 percent from the year prior.

Given the undeniable severity of the climate change problem, we can't afford to wait for existing infrastructure to catch up with renewable systems. Thanks to Grid+, we don't have to.

Traditionally, the energy supply chain has been divided into four categories: generation, transmission, distribution, and retail.

Generation happens at a power plant or some other large-scale energy producer. That energy is then transmitted over a high-voltage network to a consumer network known as a distributor. Distributors operate the lower voltage lines that run to homes and businesses.

Retailers, meanwhile, have the job of managing customers. They meter customer usage and bill them accordingly, but don't actually own any of the systems through which energy travels. These entities may be known as utilities and they can mark up the price of energy by as much as 100 percent to cover marketing fees, administration costs, bad debts, and payments to distributors to deliver electricity to your home.

Grid+ is an alternative to these retailers that utilizes blockchain technology to lower your home energy bill by as much as 38 percent.

A Utility That Works for You

Central to the Grid+ system is the Grid+ Smart Agent, an always-on, Internet-enabled hardware device that lives in your home. At its most basic, the Smart Agent is a computer that intelligently manages home energy usage, augmenting the role of the traditional retailer.

This system has numerous benefits over the current process of buying and selling energy.

Because Grid+ cuts traditional retailers out of the process, you're no longer paying their markup for administrative costs, nor relying on their potentially faulty record keeping. Everything is done over a blockchain, so the process is secure and verifiable. The automation of billing and settlement will dramatically reduce overhead, and those savings are passed along to the customer.

The Smart Agent can automatically buy electricity when it's cheapest, store it in your battery, and then sell it back to the grid when energy is expensive. Using a Tesla Powerwall II, this alone could amount to $1,275 in revenue per year — revenue that requires practically zero effort on your part. In just six years, this revenue alone could pay for the battery.

The Smart Agent can also answer questions such as the amount of energy you're likely to use tomorrow and which available market will offer the lowest price for that energy. It will then purchase energy at the lowest possible rate, unlike a traditional utility, which has little reason to optimize costs for an individual consumer.

The Smart Agent can take advantage of the growing Internet of Things (IoT) to further optimize your energy usage. For example, it could connect to the calendar on your smartphone to see that you'll be out of town for three days and then pause your air conditioning system until you're on your way home.

By combining the security and efficiency of blockchain technology with existing energy infrastructure and innovations, Grid+ has the potential to act as the bridge between our fossil fuel-powered past and renewable energy future.

The company is giving early supporters the opportunity to take advantage of even lower energy costs through the GRID token sale launching on October 30 at 12 pm EST. Each GRID token will cost $1.15 and will be redeemable on the Grid+ platform for 500 kWh at wholesale electricity price, meaning owners will not pay any markup above wholesale costs on their next 500 kWh of consumed electricity. A fixed number of GRID tokens will be minted prior to this sale, so once they are all purchased, no others will be created.

Grid+ plans to establish their first utility in the U.S. in Q1 of 2018, with additional global markets serviced through partnerships.

The preceding communication has been paid for by Grid+, and Futurism has a small financial stake in Grid+’s token launch. This communication is for informational purposes only and does not constitute an offer or solicitation to sell shares or securities in Grid+ or any related or associated company. The Grid+ tokens are not being structured or sold as securities or any other form of investment product, and consequently, none of the information presented herein is intended to form the basis for any investment decision, and no specific recommendations are intended. This communication does not constitute investment advice or solicitation for investment. Futurism expressly disclaims any and all responsibility for any direct or consequential loss or damage of any kind whatsoever arising directly or indirectly from: (i) reliance on any information contained herein, (ii) any error, omission or inaccuracy in any such information or (iii) any action resulting from such information.

Each recipient of this communication expressly acknowledges that the Grid+ tokens are being sold solely for the purpose of providing purchasers of such tokens with access to the services associated with the tokens, and that such persons are not being offered, and will not be purchasing, any tokens for any other purposes, including, but not limited to, any investment, speculative or other financial purpose. Each recipient further acknowledges that they are aware of the commercial risks associated with Grid+ and the network associated with its tokens.

Read This Next
Sad!
Melania Trump Accused of Secretly Buying Her Own NFT to Avoid Disgrace
Greenwashing
World Wildlife Foundation Cancels NFT Project After Critics Point Out That It Was Actually a Huge Polluter
Stoking the Fire
Gaming Exec Says His Customers Are Idiots For Not Understanding How Great NFTs Are
Art Flop
Independent Artists Say NFTs Are the Bane of Their Existence
Plundering DAOs
Hackers Plunder "Cryptocurrency City" That Had Promised "Dank Memes"
More on Future Society
Gas Giant
Yesterday on the byte
Journalist Eats Lab-Grown Chicken, Gets "Weirdly Gassy"
Musk Rats
Thursday on the byte
Twitter Is Quietly Re-Suspending the Lunatics Elon Musk Let Back On
Going Wireless
Wednesday on futurism
Hackers Took Over a Subdomain of Wired.com for Several Months and Replaced It With Sleazy Online Casino Content
READ MORE STORIES ABOUT / Future Society
Keep up.
Subscribe to our daily newsletter to keep in touch with the subjects shaping our future.
+Social+Newsletter
TopicsAbout UsContact Us
Copyright ©, Camden Media Inc All Rights Reserved. See our User Agreement, Privacy Policy and Data Use Policy. The material on this site may not be reproduced, distributed, transmitted, cached or otherwise used, except with prior written permission of Futurism. Articles may contain affiliate links which enable us to share in the revenue of any purchases made.
Fonts by Typekit and Monotype.