Eventually, they want to try the same genetic modification on human astronauts. 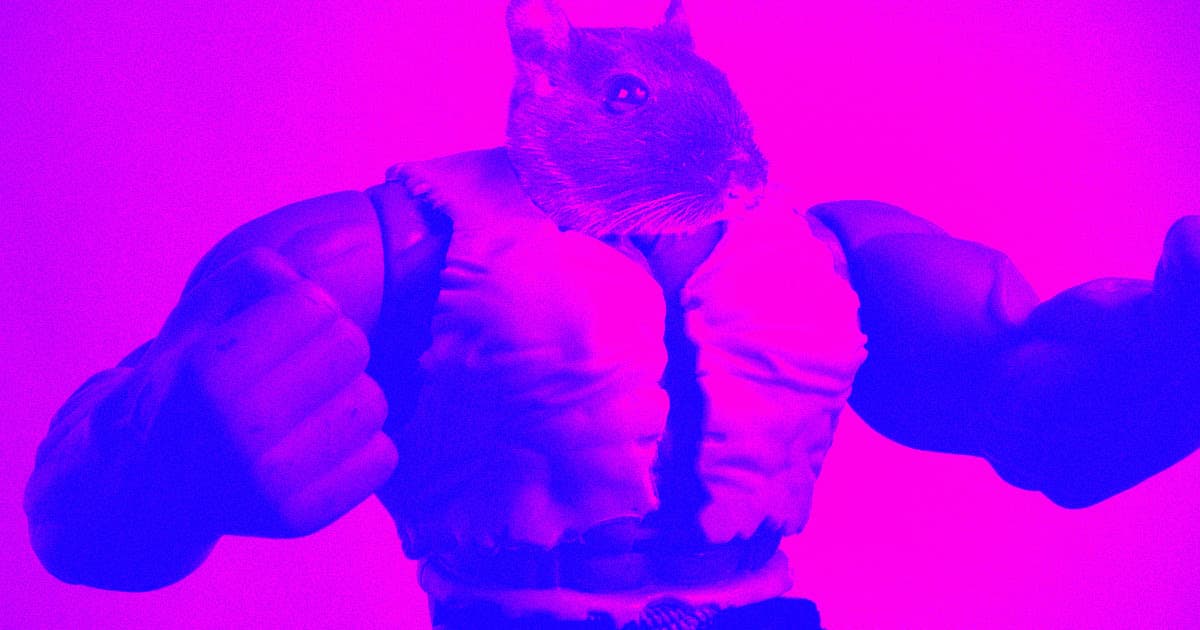 A bunch of mice that had been gene-edited to be absolutely ripped headed to the International Space Station last year. And according to newly published research, they were capable of keeping their gains over an entire month.

A team led by Se-Jin Lee of the Jackson Laboratory in Connecticut sent 40 young female black mice to the station back in December 2019. Some of the mice, though, had been gene edited to remove a protein called myostatin that limits muscle growth.

As a result, the treated mice had about twice the skeletal muscle mass of normal mice. The researchers were hoping to learn about how microgravity affects bodies in space, particularly when it comes to muscle atrophy and bone loss — risks that mean astronauts have to spend a considerable amount of their time working out on board the ISS.

The 24 regular mice lost considerable muscle and bone mass in microgravity, like human astronauts. But eight of the bodybuilder “mighty mice,” which launched with double the muscle mass, retained most of that additional mass. And another eight mice received the “mighty mouse” treatment in space — and came back to Earth more swole than ever.

After parachuting back down to Earth inside a SpaceX capsule in January, the set of untreated mice got the treatment as well, and quickly recovered muscle mass, faster than those who didn’t receive the treatment.

“We show that targeting this signaling pathway has significant beneficial effects in protecting against both muscle and bone loss in microgravity,” the researchers wrote in their paper published in the journal Proceedings of the National Academy of Sciences today.

They concluded that the technique could work “not only in astronauts on prolonged missions but also in people with disuse atrophy on Earth, such as in older adults or in individuals who are bedridden or wheelchair-bound from illness,” according to the paper.

Despite the successful experiment, this kind of drug won’t be injected into human astronauts any time soon.

“We’re years away,” Emily Germain-Lee of Connecticut Children’s Medical Center, co-author of the study, told the Associated Press. “But that’s how everything is when you go from mouse to human studies.”

More on the muscle mice: NASA’s Super-Muscular Mice Return to Earth From Space

Read This Next
Overloaded
Whiny Space Tourists Say They Were Too Busy on the Space Station
Scheming Dmitry
Former NASA Official Says Russian Space Head Is Trapped, Trying to Escape
Shuttling Russians
NASA Deciding Whether Russian Cosmonaut Is Allowed on SpaceX Launch
Futurism
NASA Astronaut Says He Candidly Discussed Ukraine Invasion With Cosmonauts
Need a Hero
Elon Musk Suggests That SpaceX Could Keep ISS Aloft Despite Russian Threats
More on Off World
Death Watch
Yesterday on futurism
Goodnight Sweet Prince: NASA is Officially Killing Its Mars Lander
Tray Revolution
Yesterday on the byte
Elon Musk Spotted Seemingly Using Starship Heat Shield as Snack Tray
Stargazing
Yesterday on the byte
Watch the Milky Way Instantly Pop Into View During Lunar Eclipse
READ MORE STORIES ABOUT / Off World
Keep up.
Subscribe to our daily newsletter to keep in touch with the subjects shaping our future.
+Social+Newsletter
TopicsAbout UsContact Us
Copyright ©, Camden Media Inc All Rights Reserved. See our User Agreement, Privacy Policy and Data Use Policy. The material on this site may not be reproduced, distributed, transmitted, cached or otherwise used, except with prior written permission of Futurism. Fonts by Typekit and Monotype.