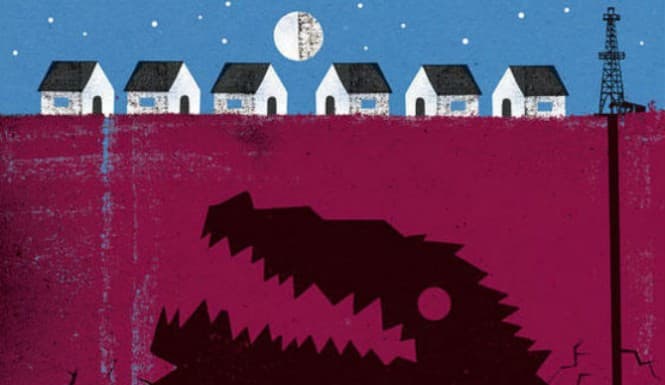 Did the earth move for you? It did for the people of southern Colorado and northern New Mexico, and recent scientific research tells us why.

In 1999, water disposal companies began pumping waste water in to deep underground chambers, drastically increasing the pressure in local ground rock formations. Since 2001, there have been 16 earthquakes in the region at 3.8 and above on the Richter scale, compared to only 1 in the previous thirty years. That's an increase of more than 3,300% Even more interesting, the earthquakes all occurred within 5 km of injection sites and the regions covered by related industrial activity.

This is not an isolated incident.

Oklahoma has  also seen a marked rise in earthquakes since 2008, many occurring in the vicinity of subsurface water disposal operations, with Oklahoman earthquakes now constituting nearly half of all seismic events in the Central and Eastern states. In fact, just four if these disposal plants are thought to be responsible for around 20% of recent earthquakes in the central U.S. Scientists studying the phenomenon have discovered that these high pressure zones will continue to expand, and are already causing earthquakes up to 30 km from injection sites.

Youngstown, Ohia, suffered its first quake in recorded history in January of 2011. By December that year, they had experienced over 100 earthquakes, leading scientists to investigate the source of the new seismic activity. Researchers discovered that the Youngstown tremors coincided with activities at the Northstar 1 water disposal plant in the neighboring state of Pennsylvania, which began operations in December 2010. The plant was closed by the Ohio Department of Natural Resources later that year.

Where's the water coming from?

Waste water is a primary byproduct of Hydraulic Fracturing, or Fracking. This is a controversial, yet increasingly popular, method of extracting natural gas and crude oil from underground shale deposits.

The fracturing process requires between 1 and 8 million gallons of water to be pumped in to these shale deposits, along with around 40,000 gallons of chemicals, and a whole heap of sand. The mixture breaks up porous rock formations, releasing natural gas and crude oil. You can learn more about the workings of the process in Jamie Trosper's article on the subject.

What is left is thousands of gallons of chemical/water sludge—earthbound substances, like bromide, arsenic, barium and naturally occurring radioactive materials (like uranium and radon) hat were picked up along the way. Some of the water is recycled, some remains in the earth, and the rest is (hopefully) separated for disposal. In the best case, this is delivered to professional water disposal operations. In other instances, it may be used for road cleaning and cattle watering.

Little is known about the potential side-effects of around one third of the two hundred chemicals commonly used in the Fracking process, but at least 8 are known to be toxic to mammals, with research ongoing.

Twenty-four of these Fracking chemicals were tested by the International Society of Endocrinology, and all were found to disrupt hormonal function in the human body, interfering with male and female reproductive hormones, thyroid functioning, among other effects. According to these findings, this has already to led to patterns of “decreased semen quality in men, higher miscarriages in women and increased risk of birth defects in children” living close to Fracking operations.

One class of Fracking chemicals, surfactants (used to separate oil and water), are claimed to be no more dangerous than those used in household products like toothpaste, detergent and ice-cream, yet Doctor William Stringfellow has warned the public not to misinterpret this assertion:

"You can't take a truckload of ice cream and dump it down the storm drain. Even ice cream manufacturers have to treat dairy wastes, which are natural and biodegradable. They must break them down rather than releasing them directly into the environment."

Computer models have shown old assumptions - that fracking solutions will be trapped deep underground by layers of impermeable rock – to be false, with the potential for the liquid to reach surface aquifers in as little as ten years.

What's more, though Fracking wells are protected by cement and steel casings, which are meant to prevent toxic fluids from leaking out, research has shown that between 1 and 10% of all casings fail. Even under the best possible circumstances, each well will leak around 200m3 of Fracking solution in to the surrounding earth. Colorado has more than 50,000 active wells, for example, which equates to 4000 Olympic swimming pools full of chemical mixture making it's way in to local ground water.

Suspected water contaminations have been widely debated, but evidence from a variety of sources suggests that such accidents have, in fact, occurred on several occasions. For example, drinking water supplies in Fracking regions of Northeast Pennsylvania have been shown to contain as much as six times the normal level of methane, though this falls short of the explosive potential claimed by some anti-Fracking activists. Research suggests that in some rare cases, other earthbound contaminants like radon and arsenic could be next to hit water-supplies.

Fracking also has its upsides.

While hydraulic fracturing does use more water than conventional gas drilling, producing energy from natural gas consumes much less water than coal or nuclear power, actually saving water in the end. It even fares better than environmentally-friendly corn ethanol in this respect, using less than a hundredth of the water per unit of energy produced.

Natural gas also produces less carbon dioxide than coal power, with almost none of the residual sulfur, mercury or ash.

Still, with up to a third of the natural gas burned off in giant naked flames called 'flares' (as an unwanted byproduct to crude oil extraction) and persistent methane leakage in older Fracking plants, wasteful emissions might just cancel out potential environmental gains. However, this can be rectified if we alter our practices in relation to these flares.

The petrochemical industry creates employment opportunities for engineers, chemists and other qualified workers, providing 2.1 million US jobs in 2012. It may also stimulate local economies, contributing to wage rises of up to 19% over 5 years in some Pennsylvanian counties host to large-scale Fracking operations.

Homegrown Oil and Gas also contributes to national security, by reducing dependence on foreign oil producing nations. An issue which first came to the table after the 1973 OPEC oil embargo, with president Jimmy Carter promising to secure oil “by any means necessary, including military force, ” in 1980. The US now produces more than 50% of the oil it uses, and has become the worlds largest producer of natural gas, with US fuel contributing as much as $284 billion to national GDP.

What do you think?

So, what do you think: Economic powerhouse, environmental disaster... or both?

An interesting study recently found that liberals and conservatives have complementary scientific biases, tending to distrust evidence that contradicts their core beliefs. While conservatives were more doubtful of climate change and evolution, liberals tended to reject positive information about Fracking and nuclear power.

Do you find yourself doubting the benefits of Fracking? Or are you a proud consumer of all-American natural gas?

Let us know on the chat forum, or sign a petition for/against Fracking right here.