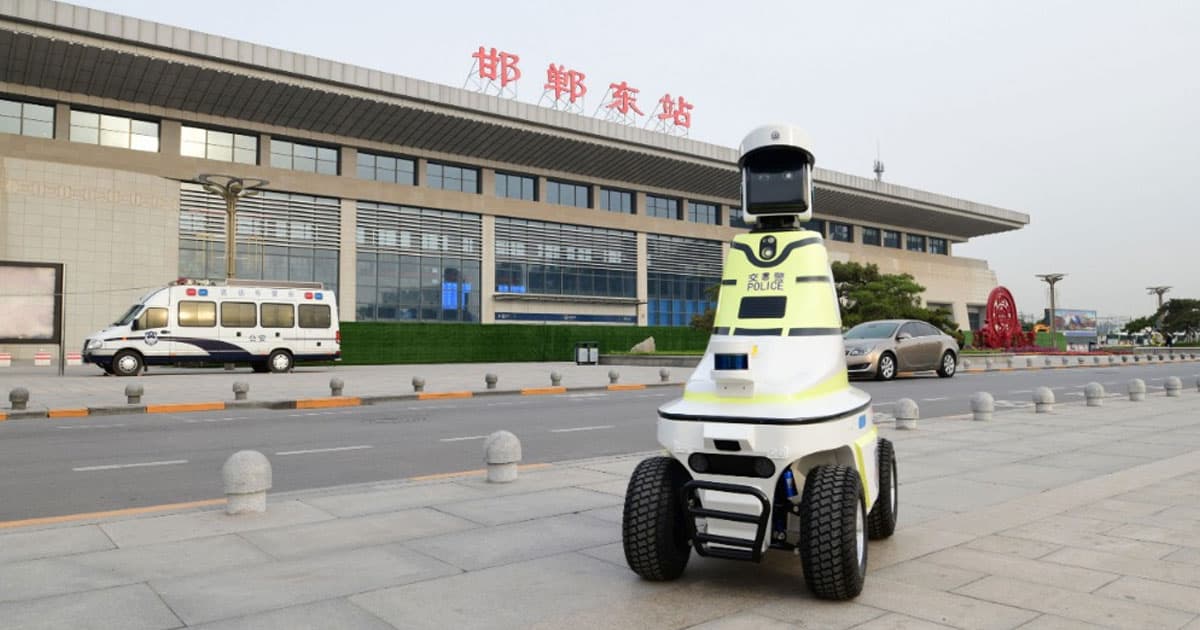 We can now add one more initiative to the growing list of ways China is using tech to police its population.

Each of the three types of robots looks slightly different from the others and will serve a unique function, which the Global Times — another state-run outlet — detailed in its own report.

One type is a "road patrol robot" designed to look like a human traffic officer, with a yellow uniform and white hat. That bot is capable of identifying drivers and snapping photos of their illegal behavior.

Another is an "advice traffic robot." That one will post up in vehicle management stations where it will answer residents' questions and guide them where they need to go. It'll also automatically report any security risks or suspects to police, the Global Times wrote.

The third type is an "accident warning robot" designed to let drivers in passing vehicles know when human police have a traffic accident to deal with.

The robots will be on duty 24/7, Handan Public Security Bureau official Li Huai told Chinese news site hebnews.cn, according to the Global Times' report, but it isn't clear whether that applies to just one of each type of robot or several.

What is clear, though, is that China is leaning into the use of technology for law enforcement.

The nation has already deployed facial recognition systems to catch jaywalkers and made RFID tags mandatory in new cars so drivers can't skip out on paying highway tolls. It has also equipped some police officers with facial recognition glasses to help them spot people wanted in connection with crimes.

This isn't the first time China has deployed police robots, either — in 2016, its AnBot security robot began making the rounds at the Shenzhen airport, and in 2017, its E-Patrol Robot Sheriff began patrolling streets.

It was seemingly only a matter of time before China found a way to use robots to help its traffic officers maintain order — and now, it appears that time has arrived.

Read This Next
Chinese Chatbots
Chinese Company Gearing Up to Release Powerful ChatGPT Competitor
Beep Boop
Scientists Say They're Now Actively Trying to Build Conscious Robots
Garden Variety RAIcist
Scientists Alarmed When Robot Immediately Becomes Racist and Sexist
Bot-icelli
Sorry, But There's No Way Tesla Is Selling a Humanoid Robot Next Year
ElonAI
Elon Musk Says Tesla Robots Could Achieve AGI
More on Artificial Intelligence
We're in Hell
Yesterday on the byte
Scammers Are Already Convincing Idiots They Can Get Rich Using ChatGPT
Bing Bing Bing!
Yesterday on the byte
Microsoft Appears to Have Accidentally Launched New Bing With ChatGPT Functionality
Naughty Botty
Feb 4 on futurism
Amazing "Jailbreak" Bypasses ChatGPT's Ethics Safeguards
READ MORE STORIES ABOUT / Artificial Intelligence
Keep up.
Subscribe to our daily newsletter to keep in touch with the subjects shaping our future.
+Social+Newsletter
TopicsAbout UsContact Us
Copyright ©, Camden Media Inc All Rights Reserved. See our User Agreement, Privacy Policy and Data Use Policy. The material on this site may not be reproduced, distributed, transmitted, cached or otherwise used, except with prior written permission of Futurism. Articles may contain affiliate links which enable us to share in the revenue of any purchases made.
Fonts by Typekit and Monotype.