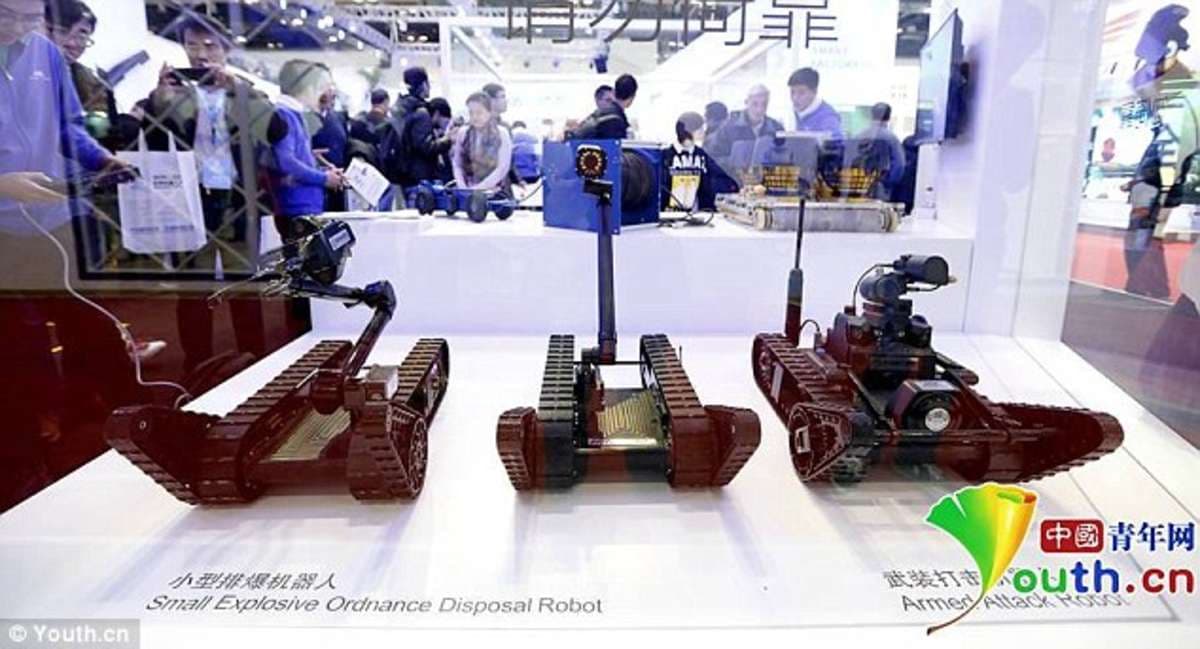 China unveiled a team of robots designed for urban combat at the Beijing 2015 World Robot Conference. The robots were developed by the Harbin Institute of Technology (HIT) Robot Group.

The robot team consists of three variants: An armed variant that can be equipped with an assault rifle, grenade, or recoilless rifle; a recon variant with NBC detectors; and an explosive ordnance disposal variant designed to disarm explosives and dispose of other hazardous materials.

Each robot runs on a 10-12kg (22-44 lb) tracked chassis. The recon variant is light enough to be carried in a backpack by soldiers, and the robots are remotely operated.

According to HIT Robot Group sales manager Cheng Deqiang, one set of the three variants will cost around 1.5 million Yuan (approx $230,000 USD). Among its first adopters is the Beijing police department, and other Chinese police departments are expected to soon follow.

The robot's chassis have two pairs of tracks; the smaller forward pair helps them go over obstacles like steps, which enable them to get into hard-to-reach places.

Read This Next
Chinese Chatbots
Chinese Company Gearing Up to Release Powerful ChatGPT Competitor
Beep Boop
Scientists Say They're Now Actively Trying to Build Conscious Robots
Garden Variety RAIcist
Scientists Alarmed When Robot Immediately Becomes Racist and Sexist
Bot-icelli
Sorry, But There's No Way Tesla Is Selling a Humanoid Robot Next Year
ElonAI
Elon Musk Says Tesla Robots Could Achieve AGI
More on Artificial Intelligence
Sing Me a Song
7:49 PM on the byte
Google Officially Announces ChatGPT Competitor Called "Bard"
Hmmmmmmmm
7:16 PM on the byte
Head of ChatGPT Admits She Had Concerns About Releasing It Publicly
Judge Dredd
3:34 PM on the byte
Judge Uses ChatGPT to Issue Ruling in Court Case
READ MORE STORIES ABOUT / Artificial Intelligence
Keep up.
Subscribe to our daily newsletter to keep in touch with the subjects shaping our future.
+Social+Newsletter
TopicsAbout UsContact Us
Copyright ©, Camden Media Inc All Rights Reserved. See our User Agreement, Privacy Policy and Data Use Policy. The material on this site may not be reproduced, distributed, transmitted, cached or otherwise used, except with prior written permission of Futurism. Articles may contain affiliate links which enable us to share in the revenue of any purchases made.
Fonts by Typekit and Monotype.