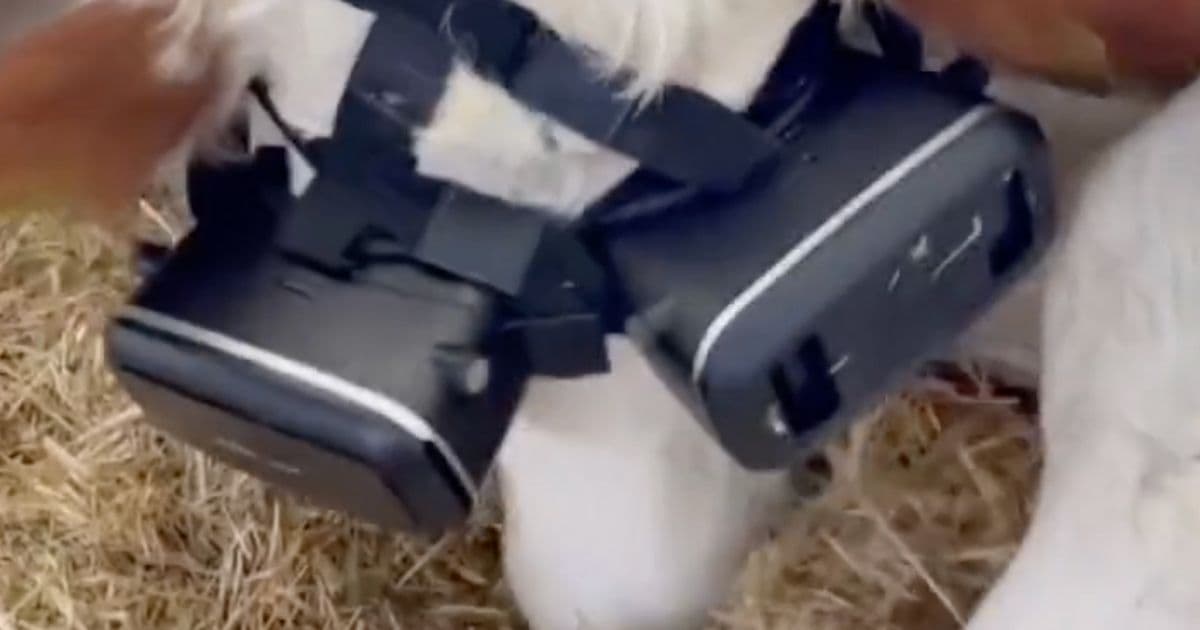 A farmer in Turkey says he's purchased VR headsets for his cows so they'll produce more milk and be less anxious.

On its face, a giant barn full of cows with headsets strapped to their furry faces to increase profitability seems pretty dystopian — but as Turkish news outlet Anadolu Ajansi reported this week, it does seem to be working.

"We get an average of 22 liters of milk per day from the cows in our farm," Izzet Kocak said in the video, translated into English. "The milk average of the two cows [that] wore virtual reality glasses was up to 27 liters."

That cows putatively produce more milk when VR makes them think they're in a beautiful, green pasture proves keeping them in agricultural environments isn't healthy, nor does it make them happy. Putting them in a Cow Matrix sounds a little grim, yes, but you can't argue with results — although it might make you a little squeamish about the tech industry's plan for human beings to start spending huge amounts of time in a VR metaverse.

"They are watching a green pasture and it gives them an emotional boost," Kocak told the outlet. "They are less stressed."

One Metro article reported that Kocak was inspired by a similar project in Russia, where special development went into the headsets with a team of vets and consultants. There's no good way to know how much all that research cost, but it's reasonable to imagine a baseline VR headset clocks in at around $300. Because Metro says Kocak plans to buy ten more, that makes the math interesting. It's worth nothing that Kocak seemingly puts two headsets on per cow, due to their large faces, meaning that ten headsets would only cover five cows.

According to one real estate investment site, agricultural land in Turkey costs as little as $1.50/meter. Since there are about 4047 square meters in an acre, that's equivalent to $4,047/acre. Because it's reasonable to keep one cow per acre of land, it means that those ten extra headsets, which almost certainly cost more than $300, could only purchase enough land to humanely add less than one additional cow to a herd.

It's a strange catch 22. Knowing cows are less productive in their current conditions means admitting the meat industry treats animals poorly, but it also means we can do something about it. You could purchase enough headsets for five cows with the same funds that would reasonably accommodate one extra bovine. Does it really matter if the cow is in a field, or only thinks it is, if the results are the same?

Realistically, we know farms have hundreds or thousands of cows, and asking them to purchase an acre per cow isn't going to provide the cheap milk that shoppers crave. So, should large-scale farmers be required to offer accommodations that make cows happier using technology?

Something to think about when you reach for that next gallon of milk.

Read This Next
Sun Shield
Scientists Increasingly Calling to Dim the Sun
Meteor Madness
NASA Fires Back at Claim Meteor Destroyed House and Killed Dog
Reduce, Reuse, Landfill
A Shocking Amount of US "Recycling" Goes Straight to the Landfill
Lil Dudes
Something Cool Is Happening to the Frogs at Chernobyl
Soggy Earth
Scientists Find Evidence of "Ocean" Hundreds of Miles Below Earth's Surface
More on Earth & Energy
Oversharing 101
Nov 21 on the byte
Bill Gates Reflects on Drinking Product of Fecal Sludge
Battery Powered
Nov 17 on the byte
Startup Says It's Building a Giant CO2 Battery in the United States
Monkey Business
Nov 15 on the byte
Meal Kit Giant Accused of Using Monkey Labor to Source Coconut Milk
READ MORE STORIES ABOUT / Earth & Energy
Keep up.
Subscribe to our daily newsletter to keep in touch with the subjects shaping our future.
+Social+Newsletter
TopicsAbout UsContact Us
Copyright ©, Camden Media Inc All Rights Reserved. See our User Agreement, Privacy Policy and Data Use Policy. The material on this site may not be reproduced, distributed, transmitted, cached or otherwise used, except with prior written permission of Futurism. Articles may contain affiliate links which enable us to share in the revenue of any purchases made.
Fonts by Typekit and Monotype.