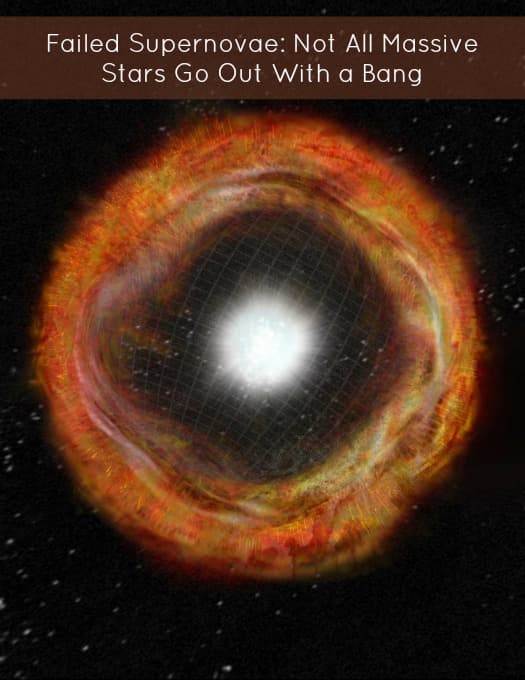 At first this may seem a bit ridiculous, as I am going to explain, the formation process involved in forming a black hole is pretty complicated. Previously I have written on the formation of black holes through core-collapse supernovae, this does need to be expanded upon.

A brief summary of what has already been discussed:

• Stars with ZAMS over 8 solar masses end as a neutron star as their core is over the 1.44 solar mass threshold. They're too massive for electron degeneracy to stop further collapse.

• When a massive star of 40 solar masses undergoes a supernova, the proto-neutron star that forms at this point is only 2-2.5 solar masses. This is at t=0.

• An 80 solar mass ZAMS star will have a proto-neutron star of 2.5-2.8 solar masses, but a black hole ~20 solar masses will eventually be the result.

What if this didn't quite happen?

What if, due to some circumstances, there wasn't enough kinetic energy in the supernova to blast most of its mass into the universe? This, my friends, is a failed supernova (or so we currently think). Some 20% of all core collapse supernovae, never actually supernova. A star out there one day, it brightens briefly and then vanishes, never to be seen again. It is not THAT different from an ordinary supernova in that respect, only no beautiful Supernova Remnant to image though.

A strange irony is that we've spent years trying to run computer models of supernovae, figuring out how they work on the inside and failing at successfully reproducing a supernova. We understand the less common type of supernova (failed supernova) better than the real thing. In the end, it all boils down to a lack of kinetic energy; in our models we simply couldn't produce enough.

More recently, neutrino boiling was considered, this was a big step towards being able to computer model a supernova. More successful supernovae could be modelled when both neutrino boiling and core bounce were used together, it is likely that the two of these together would make for a more realistic simulation.

As a star becomes more massive, more kinetic energy is required to remove the outer layers. If you think about it, a very massive star of 80 solar masses may form a 2.8 solar mass proto-neutron star at the time of core collapse, yet a 20-30 solar mass black hole could be the end result. If you stop and think about it for a moment, it does make sense. The kinetic energy output of a star undergoing a core collapse will not follow a linear curve as mass increases, its gravitational well sure doesn't! So, the larger the star, the less of it that goes off into the universe while more is gobbled up by the newly formed black hole.

It is at this point that I can tie in several different concepts to make a complete picture:

• A hypernova is where a large star fails to completely supernova. A larger portion of the star falls back onto the core and a smaller percentage goes off into the cosmos.

• The Fireball Model explains what happens within a hypernova. It also explains how a gamma-ray burst occurs and why we observe what we do. The distinction between a hypernova and a supernova can be whether the jets are facing us or not. Jets not facing us, supernova. Jets facing us, hypernova.

There we have it, stars don't always go BOOM in the same way. At times there is just not enough energy to blow away all of the material. In theory, your original 12 solar mass star could fail to supernova. A supernova failure is far more likely to occur in a larger star where lack of kinetic energy is already an issue. A failed supernova, still in essence, is a supernova, albeit a weaker one. If a supernova fails, it will almost always produce a black hole.

As to what actually causes it, is currently under speculation. Some possibilities are faster than normal rotating cores and unusual magnetic field strengths. Maybe for some reason the proto-neutron star formed slower than usual, releasing the neutrinos over a longer time scale (50ms opposed to 5ms). Whatever the cause, it is just awesome to know that a star can quite simply, vanish!