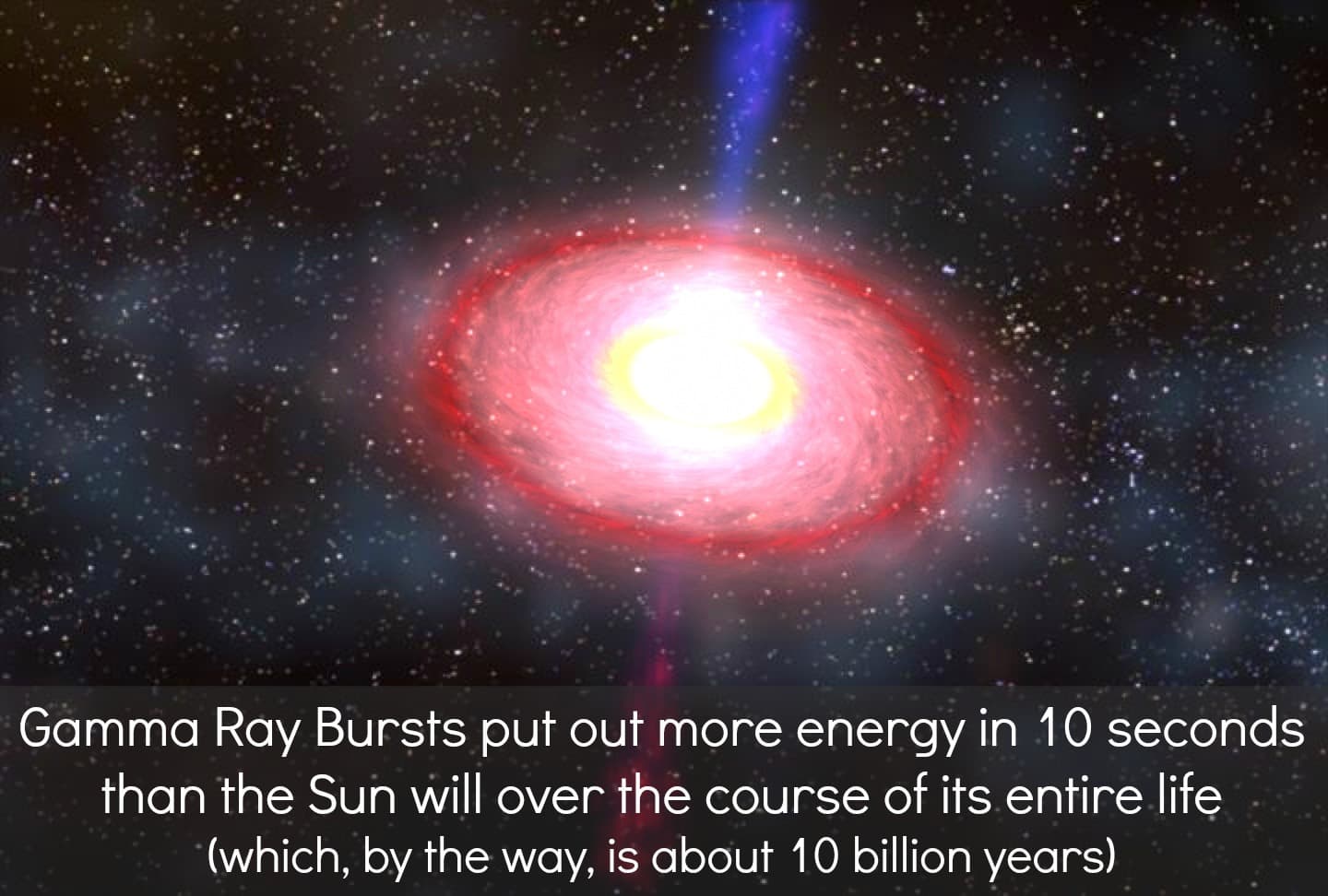 Gamma-Ray Bursts (GRBs) are some of the most energetic events in the universe. The energy that is released during a GRB is impressively high (the most powerful bursts can eject energy equal to over 9000 supernovae). These energy levels are so extreme that they cannot be created by thermal processes. So, what causes these high energy levels?

The Fireball Model is one of the few models that has been put forth to explain why GRBs tend to have such high energy levels. It also attempts to explain the time scales that govern them and why they generate an afterglow. More importantly, the model helps answer pressing questions about GRBs, like why they are so variable (liable to change) over short time scales. Ultimately, it seems that this variability is directly related to the high energy levels, as the variability indicates that it occurs over a very small area (with the emission of a GRB being on the order of 10^52 ergs, coming from a very small area, it was then theorized that a Lorentz Factor of ~100 much be associated with the GRB).

The fireball model uses two different shock wave models to explain both the initial burst of gamma-rays and the extended afterglow that is detected after the GRB. To understand the fireball model, the data must be considered in its separate parts. First, there is the energy output. It can have a range of several orders of magnitude -- from 10^49 all the way through to 10^54 ergs. Second, there is the burst duration, which can be as short as a few milliseconds and as long as several hours. It took many years before physicists were able to get close to determining exactly how GRBs operate, as many different theories were proposed, but they all struggled to explain all of the different characteristics that are observed between the different types of GRBs. In short, the fireball model must be able to encompass all of these variables in order to apply to all GRBs (and thus be a plausible model). Fortunately, this is something the model has excelled at throughout the years.

The name of the fireball model suggests the mechanism to which a GRB occurs -- in a fireball of ultra-relativistic energy consisting of optically thin material with very few baryons. In essence, during the GRB event, the inner engine remains undetectable due to the optical thickness and the lack of a thermal profile due to the compactness of the inner engine. The internal shocks cause the detectable GRB, and the external shocks form the gradual afterglow.

Mechanisms of the Inner Engine:

The workings of this inner engine will alter depending on whether it is a long or short GRB being observed. A short GRB has been theorised as occurring during a neutron star binary collision [NS-NS] or a neutron star-black hole collision [NS-BH]. It has been suggested that a long GRB could be associated with a hypernova -- a Wolf-Rayet type star undergoing a core collapse supernova.

The internal shocks are the mechanism for the production of the observed highly energetic gamma-rays. Moments after the initial GRB event, shock waves emanate from the inner engine at relativistic speeds [99.995% of the speed of light at a Lorentz factor of ~100]. The fireball is dynamic; it isn't just one shock wave emanating from the compact source. Instead, different shock waves will  be traveling at different relativistic speeds, and it is the interaction between these different shock fronts that cause the energetic gamma-ray emissions.

The internal shocks traveling at relativistic speeds convert kinetic energy into gamma-ray photons, this is the only way to get the high energy gamma-rays that are observed (as previously mentioned, they cannot be emitted through a thermal process). When the internal shocks interact with each other as they are moving at different relativistic speeds, the interactions produce Inverse Compton and Synchrotron emission.
Initially, the fireball is optically thick but as it expands and cools it becomes optically thin, allowing the gamma-ray photons to escape. Early models had the fireball and the internal shock waves as being purely radiative, but this didn't follow what was being observed (it would have made a profile too smooth). To solve this problem, some baryonic mass was added. This allowed for the internal shocks to become effectively contaminated. The added baryonic mass also aids in the conversion of some radiation energy into kinetic energy, which helps with an added kick to the relativistic kinetic energy of the shock waves, this in turn increases the gamma-ray energy more.

Even if all of the shock waves emanate from the core at the same speed they will eventually cross over multiple times. As the shells are emitting through inverse Compton, it is slowing the shock front, thus increasing the times that many shock waves interact with one another. The earlier shock waves are likely to be emitted slower than the later emitted shock waves, this would also increase the amount of interactivity between the different shock waves.

The external shock waves are used to explain the afterglow that was first detected by BeppoSAX in 1997, as the internal shock waves are not able to explain the duration of the afterglow nor the wavelengths that are detected (which range from soft x-ray through to radio). The name can be a little misleading at first; the external waves actually refer to the internal waves at a later stage --once they've cooled down and continue emanating from the source. As the shock waves continue out they will eventually interact with the Interstellar Medium [ISM] (such as a molecular cloud or some other impedance), and it is the shock waves' interaction with the dust/gas that cause the afterglow. Unlike the internal shocks, the external shocks are primarily a thermal emission. The energy transferred from the shock waves is deposited into the ISM; this material can then be caught up in the shock front and emit radiation. As the shock waves began with a lot of energy, there is a lot that can be deposited into the ISM, this is what can cause such long afterglow and why it covers all parts of the energy spectrum.

Although it would be correct to assume that all GRBs have an external shock, about half of detected GRBs don't have a detectable afterglow. The reason that no afterglow is being detected is not thought to be because the exposures aren't long enough, or because we're observing too early or too late. Rather, GRBs occur in high mass systems, whether it be through a supernova or NS-NS and NS-BH merges, this means that they've had very short stellar lives and may still be inside of a molecular cloud. Molecular clouds are very optically thick environments so the reason we're not able to detect the afterglow in about 50% of the time could just be due to reddening, absorption, or scattering.

Over the decades, many theoretical models have been created to explain these deeply mysterious events. The Fireball model has been around for a long time, has been revised over and over again in an attempt to explain GRBs. It is a neat model, for a more detailed explanation I would recommend reading an article published in 1999 by one of the men who has been at the forefront of GRB astronomy for decades.