Facebook Is Working on an Amazingly Hideous Augmented Reality Fedora

Even the guy in the patent drawing looks like he doesn't want to be there. 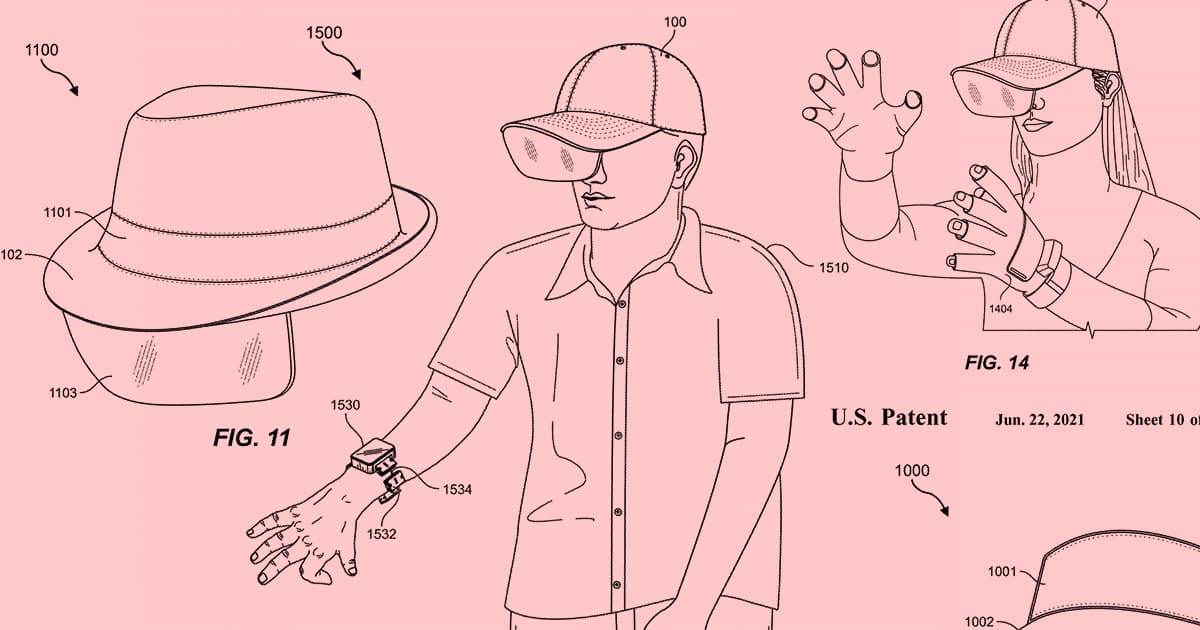 Please, for the love of god, brace yourselves for what you're about to see. Facebook was just awarded a patent for, uh, stylish augmented reality (AR) headwear — and it's a real doozy.

First, some credit for poor old Facebook and its terrible AR hats. Current mixed reality headgear is bulky, cumbersome, and all-around not great. These new designs, Gizmodo notes, at least make an attempt to incorporate the display into existing articles of clothing and, by moving hardware away from the wearer's face, could theoretically make AR headgear more comfortable.

But take a quick scroll through the patent, which was published Tuesday and first spotted by the law firm Founders Legal, and you'll see that even the little dude in the design mockups looks like he doesn't want to be there. I mean, just look at him. He looks like he's trying to escape his own hat.

Folks, you're gazing at the mildly-recoiling face of the future. Only the brain-geniuses at Facebook could come up with a mixed reality display that can fold up and out of sight when you don't feel like using it — but that also somehow simultaneously dangles from the edge of a baseball cap and balances on the wearer's nose.

If baseball caps aren't your style, don't worry! Facebook thought ahead and also released designs that would work with a visor, a cowboy hat, and even a fedora — finally allowing you to offer a tangible tip of the hat to your virtual waifu. No, mom, you don't need to google that.

To be fair, nobody can say for sure what the mixed reality headsets of the future will look like, nor can they predict which designs will take off versus which ones will get laughed out of existence. But it does seem reasonable to assume that subtlety will win out, and that an AR display embedded into a pair of glasses would probably be more popular than, well, whatever these monstrosities are.

Of course, creating a functional mixed reality device that looks like regular eyeglasses is a much trickier engineering challenge than utilizing all the extra space afforded by a hat. But if it worked, you at least wouldn't need to walk around in public doing whatever it is that this woman is up to.