Evolution 101: No, an Octopus Is Not an Alien

They're just fascinating products of evolution.﻿ 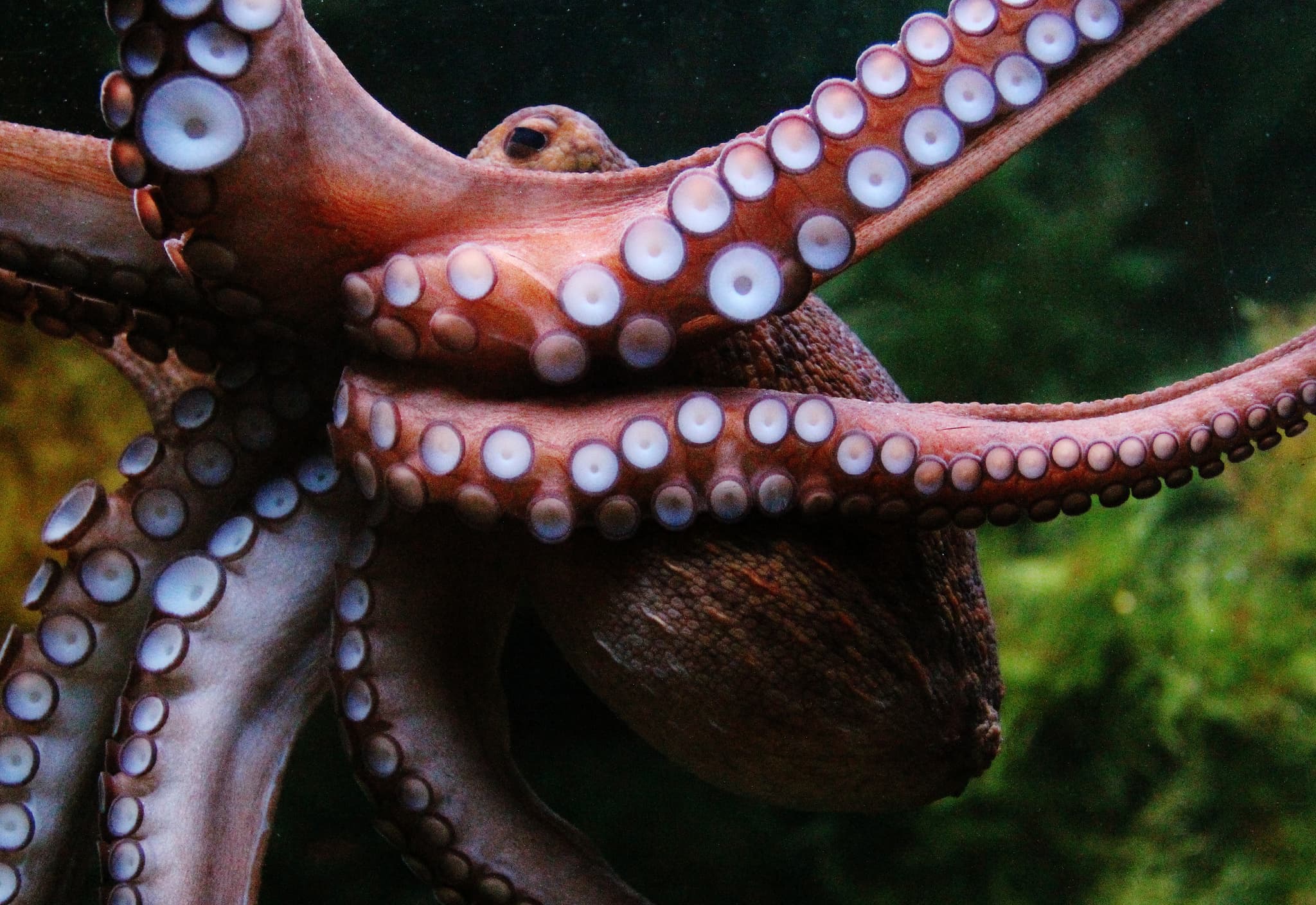 In the past, a number of news outlets have run stories that seemed to imply that octopuses are aliens. As in, the kind from outer space. Yahoo! News ran with the headline "Octopus genetic code reveals 'alien creature.'" Over at The Mirror, they were having a field day with "Octopus genetic code is so strange it could be an ALIEN, according to scientists," and the Irish Examiner proudly proclaimed, "Don't freak out, but scientists think octopuses 'might be aliens' after DNA study."

In some instances, the authors of these articles clarified that the scientists involved with the research were really just using a clever metaphor to highlight the unique complexity of the octopus genome. In other words, octopuses aren't really from outer space and their DNA is not utterly unique.

Take this excerpt from Futurity, which ran with the headline "Alien Genome Reveals Octopus Secrets:"

"The octopus genome makes studies of cephalopod traits much more tractable, and now represents an important point on the tree of life for comparative evolutionary studies," Ragsdale [senior co-author of the study] says. "It is an incredible resource that opens up new questions that could not have been asked before about these remarkable animals."

Here, the Futurity author goes out of his way to make sure it's clear that the word "alien" is only being utilized to highlight the striking differences that scientists have found between octopuses and other invertebrates. Unfortunately, the same cannot be said of all authors.

Take the Metro's article, for instance. This astounding 100-word piece titled "Octopuses ‘are aliens’, scientists decide after DNA study" is chock full of scientific rigor (sarcasm, obviously). It boldly proclaims, "The first full genome sequence shows of that octopuses are totally different from all other animals – and their genome shows a striking level of complexity with 33,000 protein-coding genes identified, more than in a human" [emphasis added].

As this quote demonstrates, throughout the article, the author implies that octopuses have a different evolutionary history than the rest of the species found on Earth. In short, it indicates that these creatures really are aliens. And, of course, they are not.

Now admittedly, the Metro is far from the most reliable publisher. But they have several million followers on their sites, easily beating Nature (where the research was actually published) in the social media game. In the end, their article got more than 600 shares on Facebook. And here's an example of the kind of comments that it got:

Similarly, when people shared this story, they were quick to highlight the truly "alien" nature of these creatures. Most often, they pulled this quote from the article and used it as a caption when they shared the story: "They're basically unrelated to anything else on our planet."

Both of the above examples show what is wrong with this story: Aside from being unutterably inaccurate, it is being used as fuel by deniers as evidence that the theory of evolution is flawed.

Let's be clear: the octopus is related to every single organism on this planet. It is not "totally unique." And no evidence indicates that there are flaws in the theory of evolution.

While a majority of the individuals who saw these articles may have understood these points and realized that claims to the contrary are unreliable and erroneous, many people are clearly being misled. But at least now you will have a handy article to send to any friends, family, etc. who may not understand these ideas...

If you aren't aware, octopuses are very incredible and highly intuitive creatures. From their keen ability to mimic other creatures to their indisputable displays of intelligence, they are truly complex creatures. The most recent research highlights this complexity.

"...the past and continuing occurrence of evolution is a scientific fact." – The National Academy of Science

What the research published in Nature actually shows is the widespread genomic rearrangements that took place over the course of this organism's evolutionary history. It also underscores the significant expansion of a family of genes that play a role in neuronal development. Notably, previously, this gene expansion was believed to be a unique characteristic of vertebrates. Now, thanks to this research, we know that similar processes happened in at least one invertebrate (octopuses).

In short, the research, which is the first whole genome analysis of an octopus, shows that the evolution of the octopus genome was probably driven by the expansion of a few specific gene families, systemic genome shuffling, and the appearance of novel genes.

Yes, it also highlights features that are unique to octopuses, but it certainly doesn't show that these creatures are totally unique organisms. Indeed, we know that all life on Earth is related.

A Solid Case for Evolution

Evolution is a scientific fact. This new research does not dispute this or even call it into question. Indeed, the authors rely heavily on the theory of evolution in their paper.

But what is a scientific fact?

For those who are wondering, according to the National Center for Science Education, in science, a “scientific fact” is “an observation that has been repeatedly confirmed and, for all practical purposes, is accepted as ‘true.’ Truth in science, however, is never final and what is accepted as a fact today may be modified or even discarded tomorrow.”

The National Academy of Science expands on this:

In science, a “fact” typically refers to an observation, measurement, or other form of evidence that can be expected to occur the same way under similar circumstances. However, scientists also use the term “fact” to refer to a scientific explanation that has been tested and confirmed so many times that there is no longer a compelling reason to keep testing it or looking for additional examples.

In that respect, the past and continuing occurrence of evolution is a scientific fact. Because the evidence supporting it is so strong, scientists no longer question whether biological evolution has occurred and is continuing to occur. Instead, they investigate the mechanisms of evolution, how rapidly evolution can take place, and related questions.

That last sentence is precisely what this new research was delving into. In short, there is a plethora of evidence supporting evolution. It is a very real scientific process that is accepted by the scientific community. No evidence refutes it. None. At all. But a ton of evidence and observation supports it. So if an absurd headline comes your way, just go back to the original paper. Chances are, it's not saying what the popular media claims.

Read This Next
Hidden Hominids
Scientist Says There May Be a Species of Hobbit-Like Humanoids Hiding on an Island
Mystery Meat
Lawsuit Claims That Subway "Tuna" Contains Extremely Weird DNA
There They Go
Biotech Company Officially Unleashes Gene-Hacked Mosquitoes in Florida
Gene-Hacked Blood Suckers
Residents Furious at Release of 500 Million Gene-Hacked Mosquitoes
Smart Swine
Pigs Caught Using Tools in First-of-Its-Kind Video
More on Hard Science
Warped Tour
Thursday on futurism
Professor Believes Door to Warp Drive May Lie With Ethylene Glycol
Sky Bursts
Thursday on the byte
Astronomers Intrigued by 25 Mysterious Repeating Radio Signals From Deep Space
Tractor Beam
Jan 26 on the byte
Scientists Build Working Tractor Beam, Although It's Comically Tiny
READ MORE STORIES ABOUT / Hard Science
Keep up.
Subscribe to our daily newsletter to keep in touch with the subjects shaping our future.
+Social+Newsletter
TopicsAbout UsContact Us
Copyright ©, Camden Media Inc All Rights Reserved. See our User Agreement, Privacy Policy and Data Use Policy. The material on this site may not be reproduced, distributed, transmitted, cached or otherwise used, except with prior written permission of Futurism. Articles may contain affiliate links which enable us to share in the revenue of any purchases made.
Fonts by Typekit and Monotype.