Eugene Shoemaker: The Real Man on the Moon 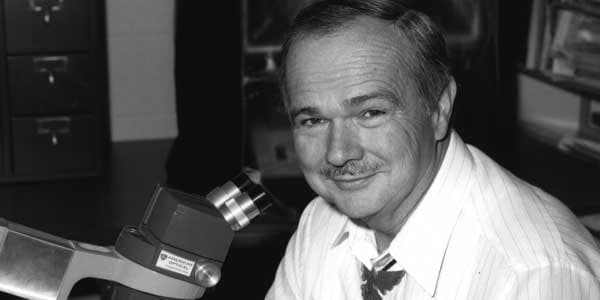 We all know that once upon a time, men roamed the moon for a short period of time, but did you know that there is one who stayed there? Dr. Eugene Shoemaker (April 28, 1928 – July 18, 1997) was a noted Geological Surveyor, who was pretty prolific in planetary sciences as well. Prior to the Moon landings, Shoemaker helped educate Apollo astronauts about the craters they might encounter during their journey However, of all of his achievements in the field of geology and in planetary science (including amassing a vast catalog containing over 20 comets and 800 asteroid), Shoemaker is most recognizable for being the co-discoverer (his wife Carolyn and astronomer David Levy are also credited with the discovery), of Shoemaker–Levy 9 — a comet was promptly, and famously, eaten by Jupiter just a year after its discovery (all the way back in the early 1990's). Even today — two decades after-the-fact — Shoemaker-Levy 9's mark on the Jovian planet remains visible.

Sadly, despite his innate desire to venture into the great unknown, a medical issue prevented him from making his dream reality (medical issues aside, it's probably easier to become the CEO of a fortune 500 company than it is to score such a coveted job).At one point, he even remarked that his biggest disappointment in life was “not going to the moon and banging on it with my own hammer.”

After he realized the hopeless nature of his dream of being an astronaut, Shoemaker spent much of his later years searching for (and successfully finding) several previously unnoticed or undiscovered craters around the world. It was during one such expedition in July of 1997 that Shoemaker died in a head on car accident in Australia. After he died, something remarkable happened; he received one of the highest honors ever posthumously bestowed by NASA.. His ashes (along with several other small trinkets) were launched into space onboard the Lunar Prospector spacecraft on January 6, 1999. The primary objective was to look for any present-day signs of water on the moon, but it also helped fulfill Dr Shoemaker's dream of exploring the moon... even if the manner in which he did probably wasn't what he had in mind.

Finally, on July 31, 1999, the Lunar Prospector Probe carrying his ashes struck the moon 's surface at speeds nearing 3,800 mph. NASA had this to say about the mission:

Little is known about the actual fate of his ashes (though odds are, they were either incinerated or buried snugly beneath the Moon's surface), which were encased in brass foil wrappings with an inscribed memorial capsule. It, in turn, contained images of Comet Hale-Bopp, the Barringer Crater, and a quotation from Romeo and Juliet reading:

"And, when he shall die
Take him and cut him out in little stars
And he will make the face of heaven so fine
That all the world will be in love with night
And pay no worship to the garish sun."

At the time, Carolyn Porco — one of his colleagues from the University of Arizona professor — said  “Grown men have told me they’ve been moved to tears when they heard this story, of the man who wanted so badly to go to the moon,” Porco continued, “Through no fault of his own he was taken out of the running. Thirty years later, he finally will get there.”

Currently, Shoemaker remains the only person ever laid to rest on the moon, hut given the recent developments in technology, the practice will almost certainly become more common in the future.

For some lighter reading, learn what it would be like to spend a day on Shoemaker-Levy 9 (if it were still intact, that is) here.