Life Beyond Earth: A day Living on Shoemaker-Levy 9 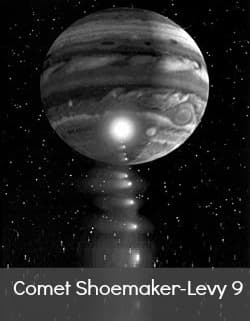 Today, I would like to tell you what it would be like to live on my favorite comet, Shoemaker-Levy 9. But I can’t. Not really anyways, because it no longer exists. Well, technically it exists. But now we call it “Jupiter.”

Confused? Let me explain. In 1993, astronomers discovered a comet orbiting Jupiter, and they immediately noticed something strange about this comet. First, its orbital period was only about two years. And second, well, it was orbiting Jupiter. Comets’ orbital periods vary wildly; some take a few hundred years, while others (a majority) take a few hundred thousand years. To most of us, a two year orbital period might not seem so peculiar. After all, the Earth’s revolution takes a year, and we aren’t that strange. Right?

Wrong.  An overwhelming majority of the objects in our solar system have an orbital period that takes thousands of years. Remember Hale-Bopp? Well, I hope that you have a really long memory because it won’t be back for about 2,500 years. So Shoemaker-Levy 9's two year orbital period is odd. Remarkably odd…especially since its orbit is around a planet, and not the Sun. And you know how people always say that being unique is a good thing?  Well, it's not.

Okay, that was a little harsh. I am sure that being unique is—sometimes—a wonderful and glorious thing. But Shoemaker-Levy 9’s uniqueness was of the apocalyptic, doom-inspiring variety.  A small comet orbiting very close to a massive object is not really wonderful or glorious. Well, not if you’re the comet anyway. Generally, when a planet captures a comet the two objects collide.

In fact, that’s exactly what happened. In July of 1994, Shoemaker-Levy 9 smashed into Jupiter at roughly 216,000 km/h (134,216 mph). The plumes that stretched out of Jupiter after this impact were large enough to completely swallow the Earth.

So I can’t tell you what it would be like to live on my favorite comet. Because Jupiter ate it  :c