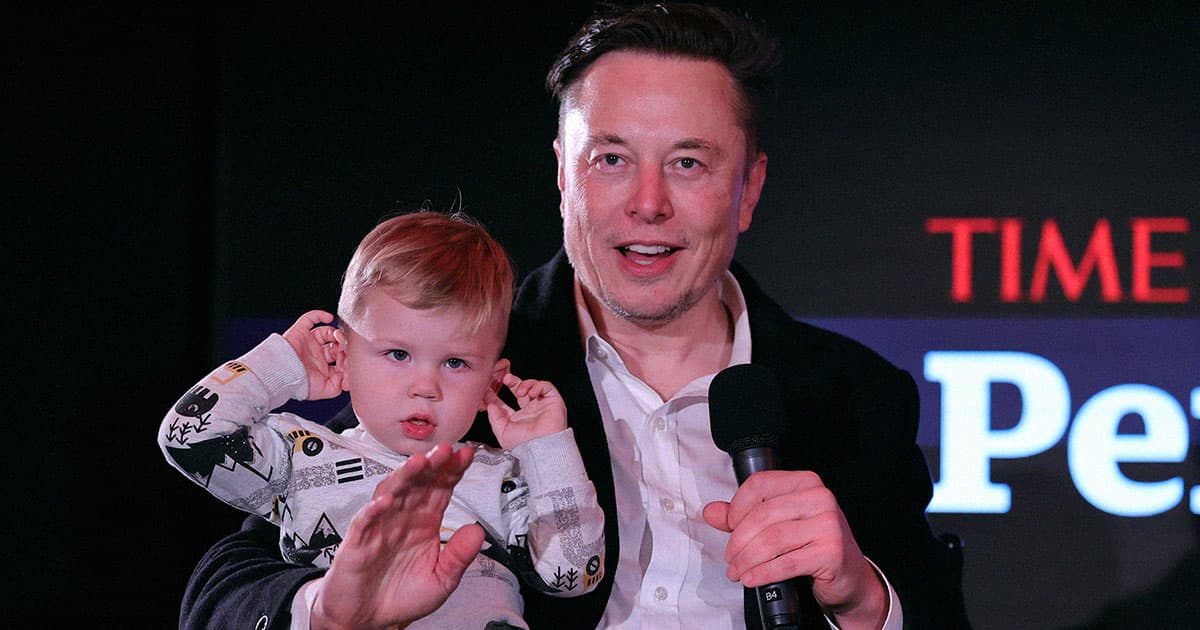 SpaceX CEO Elon Musk and acclaimed musician Claire "Grimes" Boucher had a secret baby in December, much to the surprise of pretty much everyone — including the Vanity Fair reporter who discovered the child’s existence during an interview with the mother.

What isn’t surprising, though, is that the couple decided to give the baby another off-the-wall name. After all, these were the people who named their first kid "X Æ A-Xii." Their new daughter — dubbed "Exa Dark Sideræl Musk" — is no exception.

Exa refers to exaFLOPS, according to Vanity Fair, a term used to describe a computer's ability to perform one quintillion floating-point operations a second. Dark is a nod to "the unknown," according to Grimes.

"People fear it but truly it’s the absence of photons," she added. "Dark matter is the beautiful mystery of our universe."

The last and perhaps strangest part of the name is Sideræl — pronounced as "sigh-deer-ee-el," according to Grimes — which she describes as being "a more elven" version of the word sidereal, which means "relating to distant stars." That part seems to track with both parents' interests.

"The true time of the universe, star time, deep space time, not our relative earth time," she told Vanity Fair, adding that it’s also a reference to the "Lord of the Rings" character Galadriel.

All in all, it’s an incredibly nerdy but certainly distinctive name. Despite its complexity, though, Grimes said that the two refer to their daughter as "Y," which is fitting as they call their son "X." Needless to say, that's probably another nod to math and physics.

The "Oblivion" singer added that the couple is still separated but have remained on good terms — so we’ll be sure to give you an update if they have another kid with a nearly unpronounceable name.

More on Y: A Reporter Heard an Infant Screaming and It Turned Out Elon Musk Had a Secret Baby with Grimes

Read This Next
I Silence Thee
Leaked Messages Seem to Show Elon Musk Using Twitter to Punish His Enemies
Enemy Mine
Elon Musk Now Denies That His Family's Emerald Mine Existed, In Spite of Previously Bragging About It
Bot Rush
An Overwhelming Number of Porn Bot Accounts "Drowned Out" Chinese Protest Content on Twitter
Hardcore Mode
Even Twitter's Intern Just Resigned in Disappointment
This is Exhausting
Elon Musk Seems to Be Trying to Weasel Out of Vote to Resign
More on Future Society
Down in Flames
5:20 PM on the byte
Elon Musk Apparently Thinks Twitter Is a "Flaming Dumpster Rolling Down the Street"
All Tomorrow's Pa...
4:05 PM on the byte
Party Startup Says It Has Zero Plans to Make Any Money With Investors' Funds
Primate Theft
Yesterday on the byte
It Was a Very Bad Weekend for Monkeys Being Stolen From Zoos, Apparently
READ MORE STORIES ABOUT / Future Society
Keep up.
Subscribe to our daily newsletter to keep in touch with the subjects shaping our future.
+Social+Newsletter
TopicsAbout UsContact Us
Copyright ©, Camden Media Inc All Rights Reserved. See our User Agreement, Privacy Policy and Data Use Policy. The material on this site may not be reproduced, distributed, transmitted, cached or otherwise used, except with prior written permission of Futurism. Articles may contain affiliate links which enable us to share in the revenue of any purchases made.
Fonts by Typekit and Monotype.