Earth Compared to the Universe 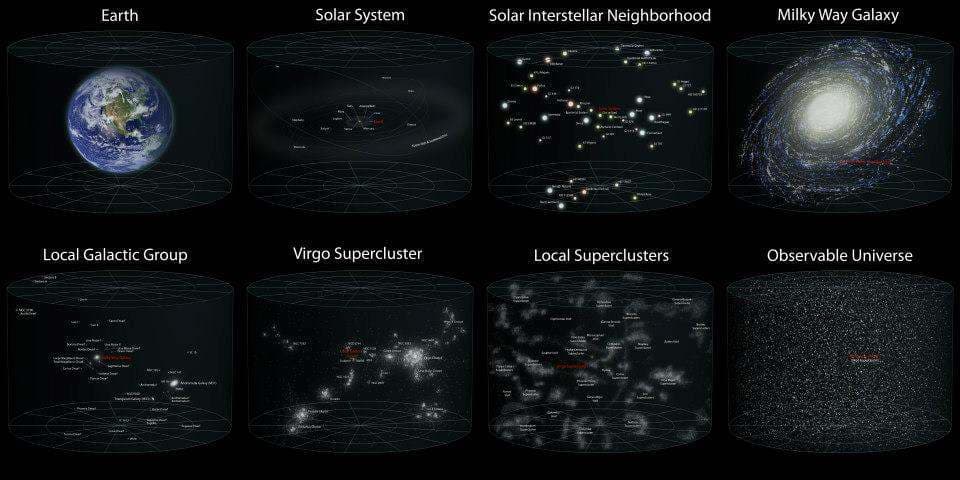 On a human scale, the Earth is a rather large object and it has been humanity's home since the dawn of the species. But, how does the Earth stack up on a Celestial Scale?

The third planet from the sun is the densest in the solar system.

It is the 5th largest planet, in the solar system, and has a radius of 6,378 km at the equator.

Light can circle our planet about seven and a half times in a single second.

The moon marks the end of Earth’s gravitational dominance. This satellite can be found orbiting at a distance of 385,000 km, which is about 60 times larger than Earth’s radius.

It takes light about 1.3 seconds to travel from Earth to the moon.

A solid iron ball that is 1,500 miles wide sits at the center of the planet.

All of the sudden, Earth starts looking small. The total mass of the solar system is about 333,345.997 Earth masses.

Meaning that Earth makes up about 0.0003% of the total mass of our solar system.

For comparison, Earth makes up about 0.2% of the total mass of the planets.

We orbit the sun at an average distance of 93 million miles, which is equal to 1 Astronomical Unit.

It takes light a little over 8 light-minutes to travel from the Sun to Earth (that means, if the sun vanished right now, you wouldn’t know it for another 8 minutes).

The farthest planet from the Sun, Neptune, orbits at an average distance of 30 AU.

Voyager is about 119 AU from Earth.

The dwarf planet Sedna, the farthest such (known) object from the Sun, orbits at an average of 526 AU.

The solar system has an estimated radius of about two light-years.

Our closest star is Proxima Centauri at a distance of four light-years. About 53 star systems inhabit the Local Interstellar Cloud. Excluding our own solar system, there are six known planets in our neighborhood and another two suspected planets. Our local cloud is about 30 light-years across.

Home to our solar system, we orbit the galactic center at an average distance of 28,000 light-years.

One orbital period (one galactic year) is equal to about 250 million years.

We have completed about 15 orbits since life started on Earth.

The Milky Way itself is about 100,000 light-years across and is home to about 400 billion stars.

The bulge at the center is roughly 12,000 light-years in diameter.

Based on data acquired from the Kepler Space Telescope, there could be as many as 40 billion Earth-sized planets orbiting in the habitable zones of sun-like stars and red dwarf stars within the Milky Way Galaxy (that's a lot of planets that could have life as we know it).

The Milky Way is thought to have some 300 billion stars. The largest known galaxy, IC 1101, has over 100 trillion stars.

There may be other galaxies in the local group that are as yet undetected (imagine that, entire galaxies in our own neighborhood that are invisible to us).

Galaxies within a cluster (like our own) are bound together by their mutual gravitational pulls. They each orbit around their common center of mass.

Because the density of galaxies is high within clusters, galaxy collisions occur. In fact, the Milky Way is going to Collide with the Andromeda galaxy.

The Virgo Supercluster is 110 million light-years across, it contains about 100 galaxy clusters (clusters like our own Local Group).

The Pisces-Cetus Supercluster Complex is the next line in our address.

The complex is comprised of about 60 superclusters of galaxies.

There are tens of thousands of galaxies in the Supercluster complex.

Our data sets only have accurate readings for some 35,000 galaxies.

At about 1.37 billion light-years across, this Supercluster complex spans a tenth of the observable universe.

It one of the largest structures known in the universe.

It is home to about 10-billion superclusters (like the Virgo Supercluster).

It has an estimated 350-billion large galaxies (like the Milky way).