After 40 Years, This Classic Out-of-Print Dune Game Is Being Re-Released

'Dune: A Game of Conquest, Diplomacy & Betrayal' is now available for pre-order. 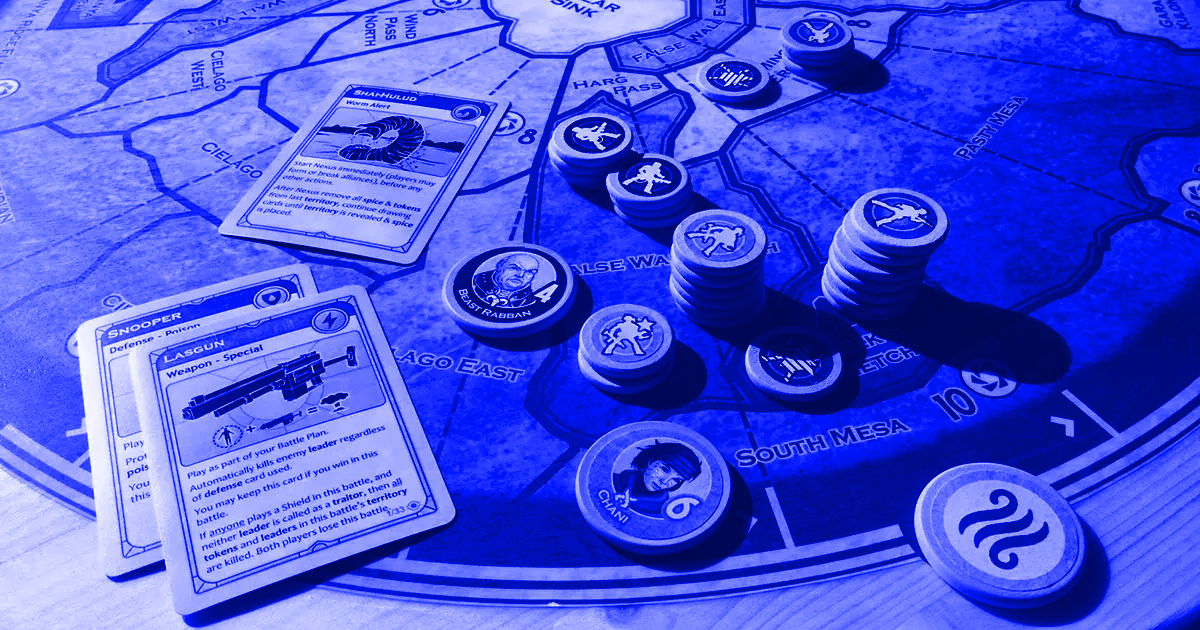 Dune is one of the best-selling science fiction novels of all time. It's spawned an underrated 80s movie starring Kyle MacLachlan, a popular TV miniseries, and an upcoming feature film remake starring Timothée Chalamet and a galaxy of other well-known stars. And if you’re a fan of strategy board games, you’re probably already aware that there is a killer Dune game that, unfortunately, has been out of print for years. However, Dune: A Game of Conquest, Diplomacy & Betrayal is now being re-released courtesy of the folks at Gale Force Nine.

First released in 1979, Dune the board game is set in the universe created by the late Frank Herbert and lets players shape the destiny of their own “noble family, guild, or religious order on a barren planet which is the only source for the most valuable substance in the known universe.”

The Dune game, which much like the 1984 feature film has been a cultishly adored item for decades, gives players the opportunity to do no less than replicate the unique world created by Herbert for his epic saga.

The Dune board game has an intricate and involved gameplay process that’s just as detailed and rich as the novels it’s based on. It allows each player to represent the leader of their choice from six factions, all of which are jockeying to control melange, the mysterious spice that serves as a kind of universal MacGuffin within the Dune world. One Duke Leto Atredies describes melange like so:

“All fades before melange. A handful of spice will buy a home on Tupile. It cannot be manufactured, it must be mined on Arrakis. It is unique and it has true geriatric properties.”

The spice is also crucial to the all-important space travel in Dune’s reality, as its psychoactive properties give humans the mental endurance to survive hyperspace voyages without cracking up. The game lets you pick a character from the book, and wage war and politics to control as much of this precious spice as possible!

The Dune board game is set to come out on October 25th, a little over a year in advance of the upcoming feature film remake scheduled for a 2020 release. But it’s in high demand, and over on Amazon, newly ordered copies of the game aren’t scheduled to ship until November 14th at the earliest. So if there’s a Spice monger in your life who you want to take care of for the holiday season, you better order now.

Read This Next
Books We Love
This Dark, Funny, Dystopian Sci-Fi Thriller Is One of the Best Reads of 2020
Brands We Love
'Exhalation: Stories' by Ted Chiang Is Essential Reading for Science Fiction Fans
Brands We Love
'The Punch Escrow' Is a Sci-Fi Thriller About Teleportation Run Amok
Brands We Love
'Spaceteam' Is a Frantic Sci-fi Card Game That Makes Dying in Outer Space Fun!
Brands We Love
These Recent Sci-fi Books Should Be at the Top of Your Reading List
More on Sci-Fi Visions
Getting Worse
Friday on the byte
Bitcoin Just Had Its Worst Month in Crypto's Entire History
FROM THE DEPT. OF...
Friday on futurism
Good Buys: Outer Brown Wicker Outdoor Armchair Conversation Set
FROM THE DEPT. OF...
Friday on futurism
Oh, Say Can You See These Amazing 4th of July Sales
READ MORE STORIES ABOUT / Sci-Fi Visions
Keep up.
Subscribe to our daily newsletter to keep in touch with the subjects shaping our future.
+Social+Newsletter
TopicsAbout UsContact Us
Copyright ©, Camden Media Inc All Rights Reserved. See our User Agreement, Privacy Policy and Data Use Policy. The material on this site may not be reproduced, distributed, transmitted, cached or otherwise used, except with prior written permission of Futurism. Fonts by Typekit and Monotype.