It's a collection of thought-provoking short stories that will blow your mind. 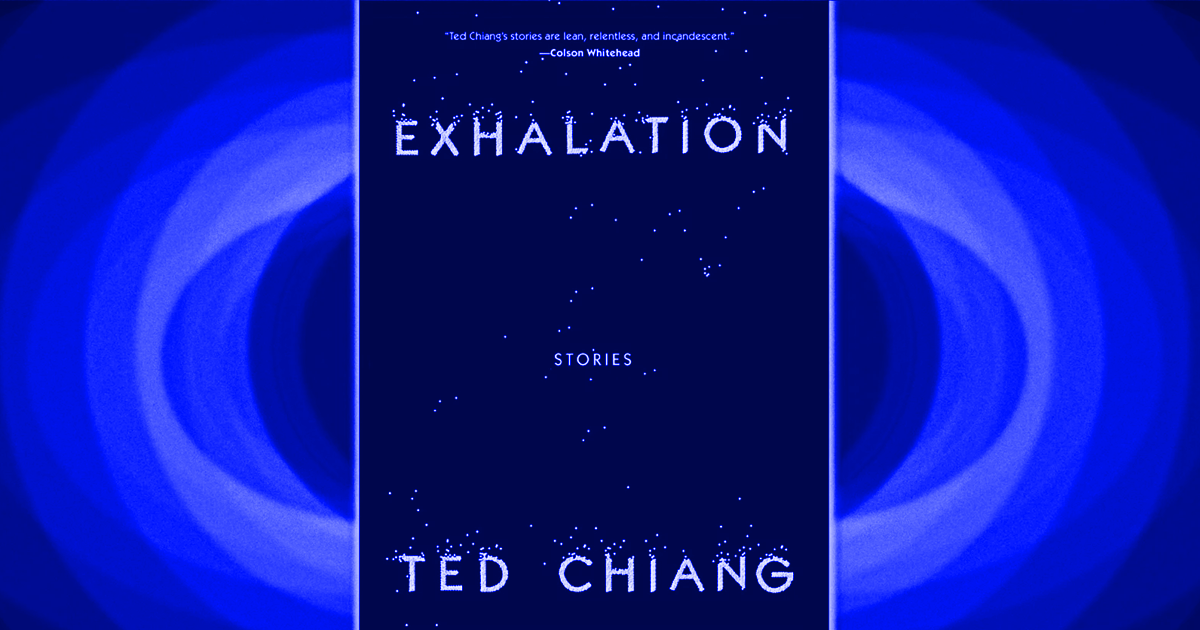 Science fiction fans are already familiar with author Ted Chiang, and now the writer of Stories of Your Life and Others (which was the source material for 2016's Arrival starring Amy Adams) is back with a new collection called Exhalation: Stories. The new book counts among its fans former President Barack Obama, who calls it “a collection of short stories that will make you think, grapple with big questions, and feel more human. The best kind of science fiction.”

Exhalation: Stories features nine stories that, like all great SF, are built to ponder the biggest, oldest questions in the universe. There’s “The Merchant and the Alchemist’s Gate,” about a fabric seller in ancient Baghdad who is confronted with a time portal. There’s “Exhalation,” which gives the collection its title, about an extraterrestrial scientist who makes a startling discovery. And “Anxiety Is the Dizziness of Freedom,” which uses the concept of parallel dimensions to explore concepts like freedom of choice and the idea of free will.

But that’s only three of the nine stories that make up Exhalation: Stories, and our descriptions don’t do justice to the dizzying and emotionally powerful stories themselves. To really do that, you have to read them for yourself. But don't take our word for it. In addition to Barack Obama, the collection has some other famous enthusiasts – like Alan Moore, the author of Watchmen and The League of Extraordinary Gentlemen, who had this to say:

“As much thought experiments as stories, Ted Chiang's exquisite mechanisms employ science fiction as an instrument to probe the human condition. Like the chronicler of Exhalation’s title narrative, he opens the back of his own head and lays bare its mysterious golden motion for the hushed appreciation of an awestruck audience. Beautifully written and conceived, this is a marvelous, astonishing collection that we would do well to read before the worlds it conjures are upon us. Urgently recommended.”

And Joyce Carol Oates is another notable author who's a big fan of this collection from Ted Chiang:

“Illuminating, thrilling. . . . Like such eclectic predecessors as Philip K. Dick, James Tiptree, Jr., Jorge Luis Borges, Ursula K. Le Guin, Margaret Atwood, Haruki Murakami, China Miéville, and Kazuo Ishiguro, Chiang has explored conventional tropes of science fiction in highly unconventional ways. . . . Individual sentences possess the windowpane transparency that George Orwell advocated as a prose ideal. . . . It is both a surprise and a relief to encounter fiction that explores counterfactual worlds like these with . . . ardor and earnestness. . . . Human curiosity, for Chiang, is a nearly divine engine of progress.”

When names like Dick, Le Guin, and Miéville are getting thrown around, you know that you’re dealing with an essential work in the Sci-fi genre. Exhalation: Stories contains stories that have never been published before as well as some uncollected rarities from the Ted Chiang vault, so if you or anyone you know is a fan of thought-provoking, brainy but readable science-fiction, head over to Amazon and get a copy right now.

Read This Next
From Our Partners
Why I Credit My Professional Success to One Subscription
From Our Partners
Save Over 50% On A Pair Of AirPod Pros And A Lifetime Of Book Summaries
From Our Partners
Expand Your Horizons With An Extra 20% Off This Rosetta Stone And VPN Bundle
From Our Partners
10 Thought-Provoking Books That Give Us Insight And Understanding Into Our Future
From Our Partners
Save Big On This Top Micro Book Library And Get $30 In Store Credit
More on Sci-Fi Visions
Health Revelation
Nov 22 on neoscope
Chris Hemsworth Reveals Grim Genetic Test Results, Will Take Break From Acting
Cybersecurity Dis...
Nov 13 on the byte
Insurance Company Refuses to Pay Ransom, So Hackers Start Releasing Health Records of Up To 10 Million People
PDA
Nov 9 on futurism
Elon Musk Is Faving Posts on Twitter That Are Making Our Skin Crawl With Embarrassment
READ MORE STORIES ABOUT / Sci-Fi Visions
Keep up.
Subscribe to our daily newsletter to keep in touch with the subjects shaping our future.
+Social+Newsletter
TopicsAbout UsContact Us
Copyright ©, Camden Media Inc All Rights Reserved. See our User Agreement, Privacy Policy and Data Use Policy. The material on this site may not be reproduced, distributed, transmitted, cached or otherwise used, except with prior written permission of Futurism. Articles may contain affiliate links which enable us to share in the revenue of any purchases made.
Fonts by Typekit and Monotype.