Survive the perils of deep space by screaming at your fellow players. 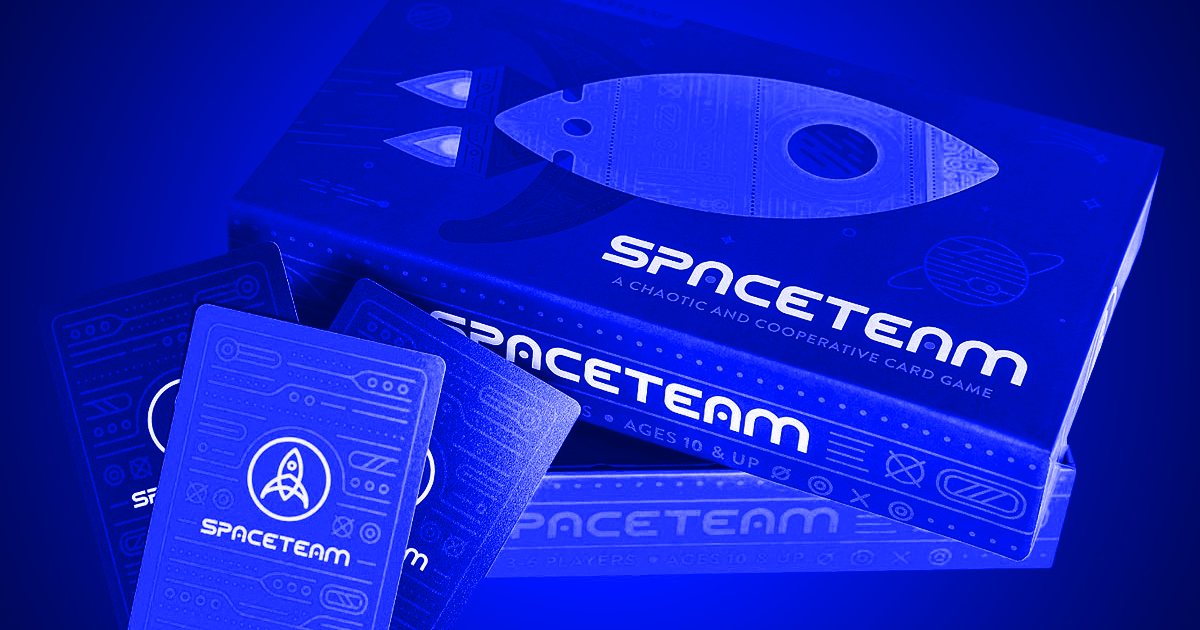 If you saw the movie Alien, or any of its sequels, you know what happens when you're marooned in space and you don't work together as a team. Cooperation is key in all dangerous environments, and that's especially true in a malfunctioning spaceship. And that's pretty much the entire premise behind Spaceteam, a fast-paced, a science-fiction-themed cooperative card game.

Spaceteam is an adaptation of a popular mobile game of the same name. The game puts you and up to five more players (and even more if you buy the expansion packs) on board a spaceship that's in need of increasingly urgent repairs. The goal is to avoid obliteration by repairing the ship before it's too late. But the repairs in question require the cooperation of all players, and also a lot of friendly shouting.

The game seems simple enough on the surface: Each player starts with five Tool Cards, with absolutely real names like “Centrifugal Disperser” or “Kilobypass Transformer." Each Tool Card can only work on certain Malfunction Cards, which are randomly drawn, and represent the various problems plaguing your imaginary spacecraft. Cards can be passed to adjacent players,, but never across, meaning the team has to find out who has the proper card and get it from point A to point B within the allotted amount of time, or risk being sucked into the vacuum of space.

The game is a proven winner, even among new players, because learning how to play is half the fun. Within minutes of starting the game, even a group of total strangers will soon be treating each other like old friends thanks to the transformative magic of cooperative shouting. As one happy Amazon customer put it:

Brought this to a game night where I didn’t know many of the people and by the end of the third round we were screaming at each other like we’d known each other for years.”

The basic Spaceteam set comes with 90 playing cards, a timer, and instructions. But if you're curious about those aforementioned expansion packs, they include extra cards that add some interesting twists to the game. To keep things family-friendly (like the game itself), go with the TRIANGULUM EXPANSION. But for an adults-only version of the game, take a look at the NSFS EXPANSION, which adds provocative gadgets like Anesthetizers, Inebriators, and Pleasurizers into the mix.

It's worth noting that the game was produced using funds from an extremely successful Kickstarter campaign which managed to raise almost $200,000 in the first thirty days, so obviously it has some loyal fans. And if you're interested in seeing what all the fuss is about, click here to get your copy of Spaceteam, today.

Read This Next
Brands We Love
After 40 Years, This Classic Out-of-Print Dune Game Is Being Re-Released
More on Sci-Fi Visions
Gone Guy
Yesterday on the byte
Man Who Accidentally Got Paid 330x His Salary Quits, Disappears
Getting Worse
Jul 1 on the byte
Bitcoin Just Had Its Worst Month in Crypto's Entire History
FROM THE DEPT. OF...
Jul 1 on futurism
Good Buys: Outer Brown Wicker Outdoor Armchair Conversation Set
READ MORE STORIES ABOUT / Sci-Fi Visions
Keep up.
Subscribe to our daily newsletter to keep in touch with the subjects shaping our future.
+Social+Newsletter
TopicsAbout UsContact Us
Copyright ©, Camden Media Inc All Rights Reserved. See our User Agreement, Privacy Policy and Data Use Policy. The material on this site may not be reproduced, distributed, transmitted, cached or otherwise used, except with prior written permission of Futurism. Fonts by Typekit and Monotype.