Does the Universe Have a Center? 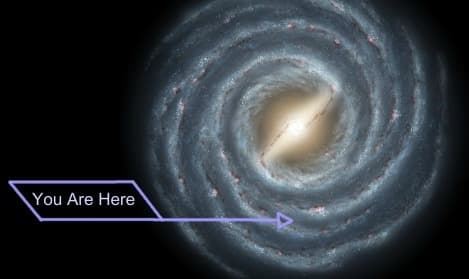 The Big Bang was the explosion that started it all. Explosions have centers. Therefore our universe has a center, right? Well, no. Not exactly.

The Big Bang theory is currently the best explanation of how our universe came to be: an explosion that created everything, including time, matter, and space itself. This explosion caused the expansion of the universe. However, the words "explosion" and "expansion" in the previous sentence are misleading. It is not an explosion in the conventional sense, where energy is released into space; rather, it is the rapid expansion of space itself. This may seem daunting, but there are two analogies to keep in mind.

The first is the trusted and famous balloon analogy. If you have one at hand it would make this much easier to understand. Cover the balloon in little dots with a marker pen and try to keep them equidistant. These dots will represent galaxies (the center of the balloon has nothing to do with this). Blow up the balloon from its wrinkly state. The surface of the balloon represents spacetime itself. You could walk in any direction for an infinite amount of time and you'll be left with nothing but callouses (assuming you could fit on a balloon). Keep in mind that the surface of the balloon represents space in a 2 dimensional manner because the dots on the balloon's surface do not have height. The actual expansion in space would be 3 dimensional.

Select a random dot, give it a cool galaxy name, and experiment! The second analogy would be a boat floating on an ocean. As they look around, the people on the boat can see a horizon. Would they assume that the horizon is the edge of the ocean, the edge of the world? No, presumably not. They would appear to be exactly in the center of the ocean. What then of a boat and few kilometers away?

Although the universe has no edges and may be infinite, the observable universe is a spherical region around Earth where light has been able to reach us since the Big Bang. Light reaching us from objects (stars, nebulae, and such) close to this horizon have been traveling for most of the age of the universe, which, as we know, is approximately 13.7 billion years. The true distance to the previously mentioned objects would be much greater, considering that, since the light has arrived at Earth, the expansion of the universe would have carried the object even further away.

Astronomer Edwin Hubble was the first to prove that the universe is expanding. In 1929, he showed that the further galaxies are traveling away from us at a faster rate than the closer ones. This is now known as "Hubble's Law" and the rate of the universe's expansion is known as "The Hubble Constant."

In conclusion - with our current understanding, it makes as much sense to say that there is no center of the universe as it would, to say that there is. However, an interesting thing to note is that the  "bubble" we call the observable universe continues to expand in each direction, giving off the impression that we are the center.