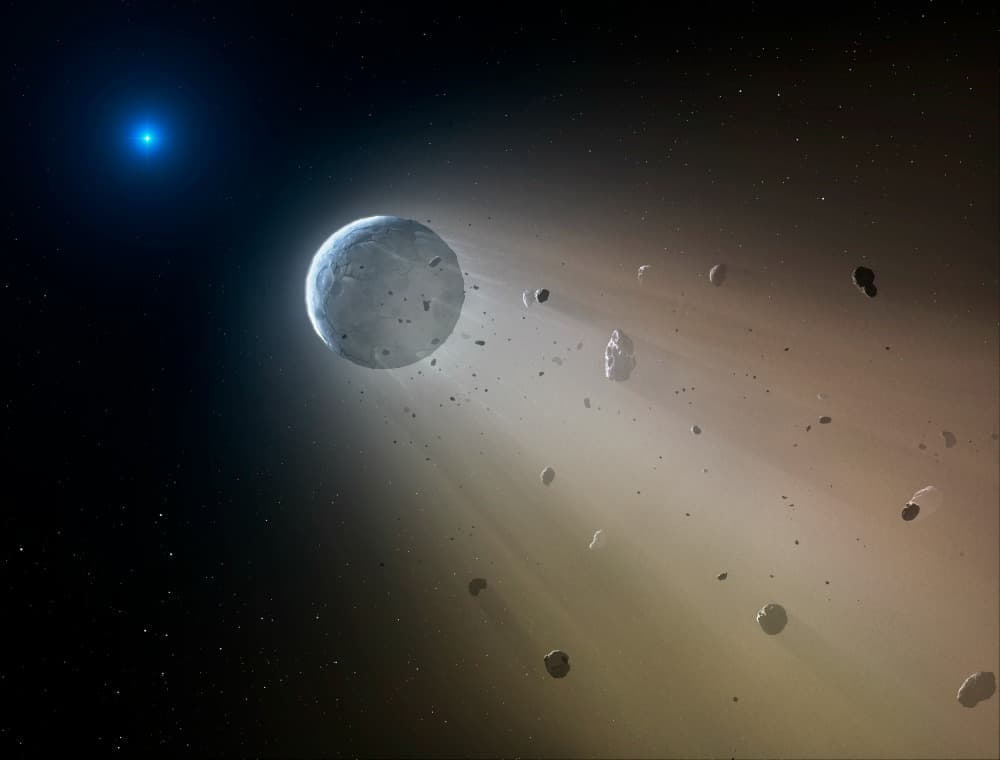 Scientists using NASA’s repurposed Kepler space telescope, known as the K2 mission, have uncovered strong evidence of a tiny, rocky object being torn apart as it spirals around a white dwarf star. This discovery validates a long-held theory that white dwarfs are capable of cannibalizing possible remnant planets that have survived within its solar system.

“We are for the first time witnessing a miniature 'planet' ripped apart by intense gravity, being vaporized by starlight and raining rocky material onto its star,” said Andrew Vanderburg, graduate student from the Harvard-Smithsonian Center for Astrophysics in Cambridge, Massachusetts, and lead author of the paper published in Nature.

Chief researcher Andrew Vanderburg, from the Harvard-Smithsonian Centre for Astrophysics, said: “This is something no human has seen before. We're watching a solar system get destroyed.”

Get the Facts Behind the Cannibal

As stars like our sun age, they puff up into red giants and then gradually lose about half their mass, shrinking down to 1/100th of their original size to roughly the size of Earth. This dead, dense star remnant is called a white dwarf.

The devastated planetesimal, or cosmic object formed from dust, rock, and other materials, is estimated to be the size of a large asteroid, and is the first planetary object to be confirmed transiting a white dwarf. It orbits its white dwarf, WD 1145+017, once every 4.5 hours. This orbital period places it extremely close to the white dwarf and its searing heat and shearing gravitational force.

During its first observing campaign from May 30, 2014 to Aug. 21, 2014, K2 trained its gaze on a patch of sky in the constellation Virgo, measuring the minuscule change in brightness of the distant white dwarf. When an object transits or passes in front of a star from the vantage point of the space telescope, a dip in starlight is recorded. The periodic dimming of starlight indicates the presence of an object in orbit about the star.

A research team led by Vanderburg found an unusual, but vaguely familiar pattern in the data. While there was a prominent dip in brightness occurring every 4.5 hours, blocking up to 40 percent of the white dwarf's light, the transit signal of the tiny planet did not exhibit the typical symmetric U-shaped pattern. It showed an asymmetric elongated slope pattern that would indicate the presence of a comet-like tail. Together these features indicated a ring of dusty debris circling the white dwarf, and what could be the signature of a small planet being vaporized.

“The eureka moment of discovery came on the last night of observation with a sudden realization of what was going around the white dwarf. The shape and changing depth of the transit were undeniable signatures,” said Vanderburg.

In addition to the strangely shaped transits, Vanderburg and his team found signs of heavier elements polluting the atmosphere of WD 1145+017, as predicted by theory.

Due to intense gravity, white dwarfs are expected to have chemically pure surfaces, covered only with light elements of helium and hydrogen. For years, researchers have found evidence that some white dwarf atmospheres are polluted with traces of heavier elements such as calcium, silicon, magnesium and iron. Scientists have long suspected that the source of this pollution was an asteroid or a small planet being torn apart by the white dwarf's intense gravity.

Analysis of the star's atmospheric composition was conducted using observations made by the University of Arizona's MMT Observatory.

“For the last decade we’ve suspected that white dwarf stars were feeding on the remains of rocky objects, and this result may be the smoking gun we’re looking for,” said Fergal Mullally, staff scientist of K2 at SETI and NASA’s Ames Research Center in Moffett Field, California. “However, there's still a lot more work to be done figuring out the history of this system.”

“This discovery highlights the power and serendipitous nature of K2. The science community has full access to K2 observations and is using these data to make a wide range of unique discoveries across the full range of astrophysics phenomena,” said Steve Howell, K2 project scientist at Ames.