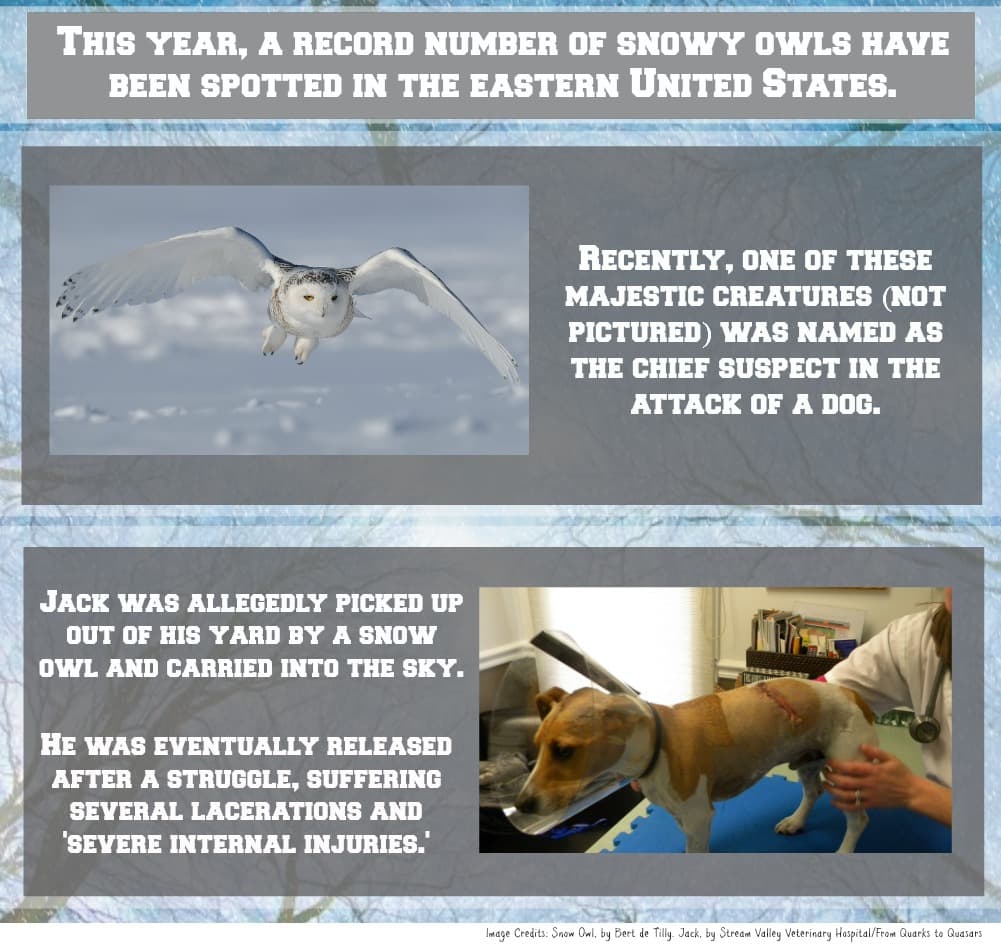 Snowy Owls are being reported in record numbers this winter in the eastern United States. These occasional mass migrations are known as “incursions”, and this one is turning out to be one of the largest in history. So what has brought some owls as far south as Florida and even Bermuda? It turns out that this isn’t so easy to answer, and there are mysteries still to be solved.

With wingspans upwards of 5 feet, beaming yellow eyes, and plumage that screams, “I’m not from around here”, the owls have been a rare delight for birdwatchers. Since they’re active during the day, a necessity for creatures from the land of the midnight sun, they’re also fairly easy to find. What’s good for birders, however, is a bit dangerous for our four-legged friends. Take a look at this alarmed Facebook post from a pet service provider in a suburb outside of Washington DC:

***There is an arctic owl called the Snowy Owl that has migrated to this area that sees small dogs as prey!***

One of our client's 15 lb Jack Russell was picked up OUT of the back yard by an owl and dropped when he struggled enough. He was BADLY injured with internal injuries and lacerations. This attack happened in the Village of Waxpool.

It is NOT nocturnal- it hunts day and night, and has a a singular "hooot" vs. the "hoo-hoo" that you normally hear.A Woofie's team member has heard this owl in the trees near their house in the Broadlands. It will be here at least until the spring- March or April. This is a picture of the ACTUAL owl that attacked.

PLEASE SHARE SO OTHERS IN THE AREA CAN BE AWARE!

I was a little skeptical when I first saw the Facebook post. While Snowy Owls are among the largest owls, a 15-pound terrier would outweigh even the biggest Snowy by more than double. The birds are undoubtedly powerful, but they typically hunt much smaller prey, so it’s difficult to find good estimates for what they can carry. Their smaller relatives, the Great Horned Owls, are known to carry prey 2-3 times their own bodyweight. Given that, it’s not so surprising that a big Snowy might take a chance on a 15-pound dog.

None of that matters to Jack, of course. He limped home with deep lacerations on his side and head just a few minutes after being let outside. The veterinarian would soon find a skull fracture and bruising around his lungs, liver, and kidneys. Nobody actually witnessed the attack, and it was thought that a coyote or car crash did the damage. But Jack’s injuries didn’t fit well with either scenario. A neighbor later identified the prime suspect, a Snowy Owl that had been seen hunting rabbits nearby. The owl’s talons fit perfectly to the lacerations, and Jack’s internal bruising likely resulted from being dropped.

Such attacks are very rare but not unprecedented, so pet owners should be on guard while the owls are in town. But what has brought them to town in the first place? The best place to look for the answer is with their main food source, Lemmings. Even if you’re not familiar with the animal, the term "lemming" probably rings a bell. It has become a metaphor for people who blindly follow popular opinion, sometimes to disastrous consequences. This is because of the Lemming’s curious mass suicide behavior, which was popularized by White Wilderness, an Academy Award winning nature documentary produced by Disney in 1958. The film includes a now infamous scene in which a group of Lemmings follow each other off of a cliff during a mass migration.

However, those poor creatures weren't jumping to their deaths on their own accords. The producers of White Wilderness had heard of the mass suicide behavior and, unable to film it in the wild, they built a turntable to shuffle the little rodents off the cliff. The whole thing was just a sad misconception. Some species do migrate en masse, which sometimes leads them to river crossings that they can’t manage. This fact combined with extreme fluctuations in their population led to the mass suicide myth. Ultimately, it’s these population fluctuations that are important to the Snowy Owl incursion.

Lemmings reproduce rapidly, and their numbers can explode unpredictably if food is plentiful. They may even multiply enough to exceed the carrying capacity of their environment, leading to population crashes down to near-extinction levels. This boom-bust pattern directly influences the behavior of Snowy Owls, who will eagerly consume up to 1,600 Lemmings per year if they are available. Perhaps as a direct result of their chaotic prey populations, Snowy Owls have the largest clutch size of any owl, lying upwards of 14 eggs. But it’s only during the very best Lemming years that so many offspring can survive. When food is scarce and they can’t all make it, the mother will feed dead chicks to the surviving siblings.

Cannibalism: As a brief aside, their grisly cannibalism belies the fact that Snowies are extraordinarily caring mothers compared to most birds of prey. “The Magic of the Snowy Owl” documentary produced by Terra Mater Factual Studios includes a heart-wrenching sequence in which a mother pays special attention to her weakest chick. She takes food for it from the others and goes to the chick when it becomes separated from its siblings. Such tenderness is very rare among birds of prey, which generally ignore weak offspring. One particularly harsh example is the Masked Booby, a seabird that always produces two offspring when only one can survive. The older chick immediately endeavors to push its weaker sibling out of the nest while the mother looks on. When it succeeds, the weaker chick is not helped back into the nest by its mother, but left out of the nest to die of the elements.  With this in mind, it was amazing to see this Snowy Owl display such caring behavior--even if the chick ultimately died and was fed to its siblings.

Given the extreme fluctuations in the availability of their main food source, it’s not so surprising that Snowy Owls might make periodic excursions into seldom-visited territory. If last year was a good one for Lemmings, many Snowy Owl chicks will have survived, leading to a food shortage this winter. That’s straightforward enough, and there is certainly a connection, but things still don’t completely add up. Take it from the experts:

"Movements not predictable, related in way not fully understood to abundance of prey species; thought to vary considerably from region to region… and intensity of movements fluctuates annually; ... populations periodically irruptive … when lemming numbers crash."

It’s hard enough to know what’s going on with the Lemmings, and even with that information it’s not possible to explain why the owls migrate. When the owls do come south, they look for areas similar to their tundra homeland. They search for open spaces, like farms and coastal flats, where they can hunt small mammals and seabirds. Unfortunately for everyone involved, airports also look a lot like home to a Snowy Owl. By January 9th, 53 Snowies had already been removed from Boston’s Logan Airport. They might normally see just 6 in an entire year.

The most puzzling thing about the owls removed from Logan Airport is that they’re not at all malnourished. On the contrary, the owls are largely well fed and healthy. If a food shortage is driving them south in the first place, then we might expect to see leaner birds, struggling to make ends meet. This is the mystery surrounding the incursion. If the owls aren’t having trouble finding food, is it just overcrowding from a good reproductive year that’s led many into the South? What effect is climate change having? Temperatures are rising most dramatically in the polar regions, and the arctic landscape is changing rapidly. How this affects the owls is unknown. Is this year's incursion just a freak event or might we be seeing the start of trend?

It’s fitting, I think, that such majestic creatures should still be keeping secrets from us. They appear without warning and disappear as they came, with no indication of why or when they’ll return again. So if you’re in the eastern United States, I encourage you to get outside while they’re here. The community website eBird can show you recent Snowy Owl sightings in your area, which is a good place to start. And if you have small pets, do take care that they don’t end up on the menu!