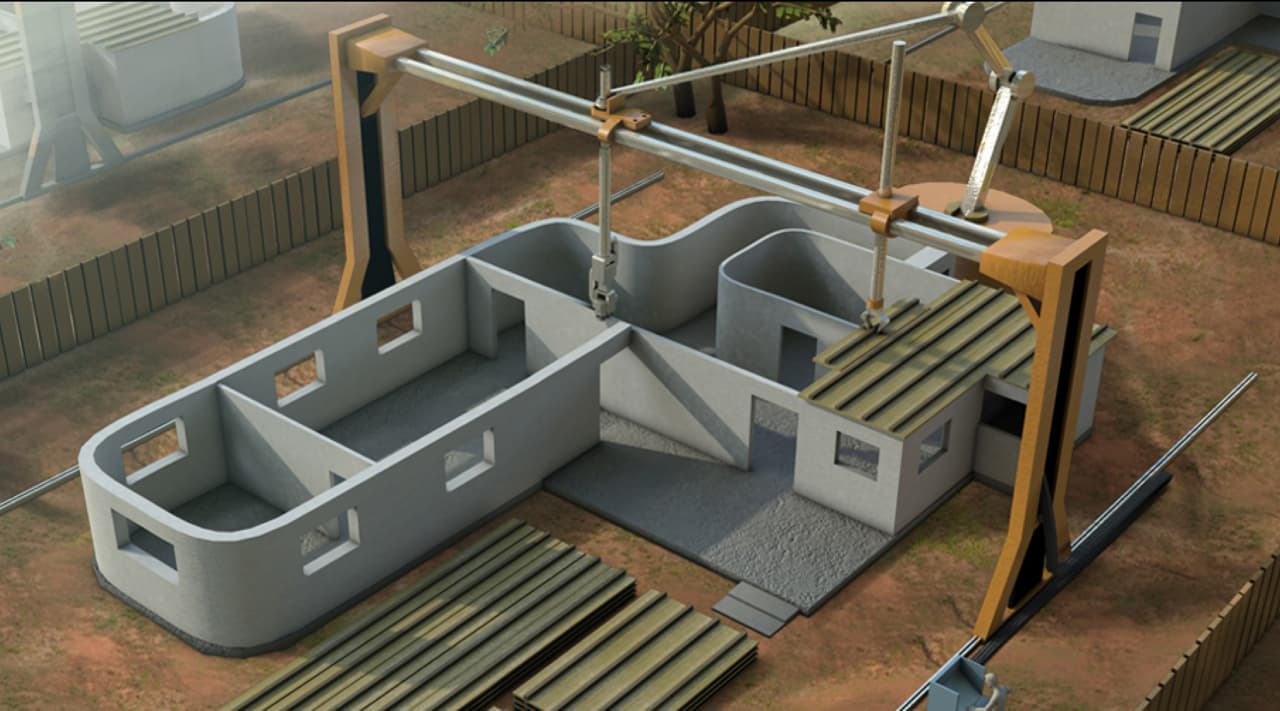 This feat is achieved by utilizing a revolutionary large size 3D printer that uses concrete as the printing medium.  Behrokh Khoshnevis, the professor at USC that created the technology, said the technology is incredibly versatile and allows for unprecedented flexibility in architecture, compared to traditional standards; however, it is still a university project that has not been commercialized, though Khoshnevis has high hopes.

How to Print a Home in a Day

At first, when you hear of this project, you may think it is extremely ambitious, an entire house in less than a single day is revolutionary. Here's how it's managed: The process starts with a team dropping the printing machine off at the designated site. They then assemble the required frame unit for the printer and then attach the printer to the frame.

The concrete reservoir is then pumped full of concrete from a standard concrete pumping truck and the printer can begin its job. As seen in the video below, the device can literally print a wall in virtually any shape, layer by layer, out of concrete.

Each time, it prints an outer section to the wall and then fills in the hollow wall with a support filling.  Since the method used to lay the concrete is continuous, Contour Crafting is able to program the printer to build walls that are curved and would otherwise be fairly difficult to construct by pouring concrete the traditional way.

This allows for the home owner to build a unique house to them in virtually any shape one can imagine.  Even with adding curved walls, the construction time of the house is barely affected, keeping construction time minimal.  To further decrease finishing costs the printer can install all the conduits for electrical, plumbing and air conditioning as it is building the house.  The end result would be a complete structure that would require minimal finishing construction to make the interior more personalized and enjoyable.

What it Means for Humanity

Compared to most other industries, construction is fairly far behind in automation.  This not only slows the process of building structures, it also leaves plenty of workers in fairly dangerous working conditions.

Automating the construction process would greatly reduce risks to construction workers; however, it would also greatly decrease the need for construction workers, as the majority of the job is now being done by the printer. For many this is obviously a conflict of interest, as it poses a threat to their career.

However, automating the construction process would also allow the first world nations of the world to subsidize low income housing for their own citizens, and also allow us to correct housing issues all over the world.

An automated process would allow nations to build emergency housing for victims of natural disasters or conflicts.  Because the technology is highly adaptable, the printer can use onsite materials. This will cut the cost of production by eliminating the need to transport heavy materials to the building site.  In the event of an emergency, the lack of a need for laborers to build shelters means that relief workers can spend more time rebuilding local infrastructure or helping those who require medical attention.

Currently 3D printers are being used for a multitude of different applications, from printing pizza's to human ears, NASA even sent a 3D printer to the ISS.  These tasks are possible because several different models of printers are able to use various printing mediums, ranging from foods to concrete and even carbon fiber.

Another promising feature both NASA and Contour Crafting are researching is building habitats on our own moon and possibly even other planets and their moons as well.

As of now, it possible to make more then you probably think with 3D printers, from guitars to guns and even Aston Martin cars, and this has already led to a considerable amount of controversy.

The range of controversy includes the legality of 3D printed items such as guns, and for obvious reasons, many countries are looking to amend laws regarding 3D printed weapons.  This still leaves the issue of Intellectual Property. Currently, 3D printing does not fall anywhere under intellectual property laws.  This mean small business owners could see their products rampantly copied, which could seriously affect their business.

Even as industrial 3D printing becomes more practical and the material cost lowers in price, large scale manufacturers will also start to see their products copied more frequently.  Currently, the only real protection businesses have is copyright laws. If a person is blatantly copying your product to sell in mass quantities there is legal grounds to sue over copyright infringement; however, the cost to pursue someone who has copied a small amount of items would outweigh any monetary recovery.