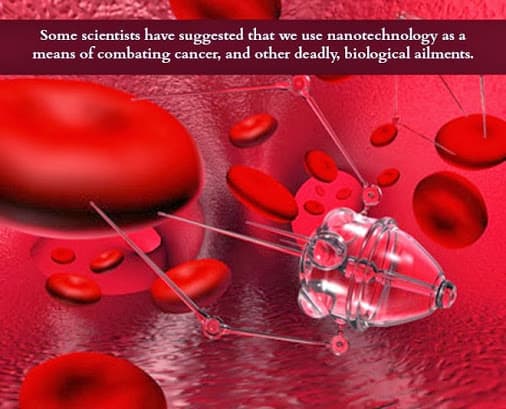 The concept of nanotechnology originated from Richard Feynman's lecture There's Plenty of Room at the Bottom; however the term itself wasn't coined until 1974 by Japanese professor Norio Taniguchi.  It wasn't until the mid-1980s that nanotechnology began to flourish; due in part to research conducted by Kim Eric Drexler, Gerd Binnig, Heinrich Rohrer, Harry Kroto, Richard Smalley and Robert Curl, all of whom significantly advanced the field.  In the early 2000s nanotechnology began to garner increased scientific, political and commercial attention that led to both progress and controversy.  The commercialization of nanotechnology in the early 2000s provided us with products like Silver Nano, nanoparticle-based transparent sunscreen and carbon nano-tubes which are used in a multitude of applications, such as stain-resistance in clothes.

A research team at Cornell University have been combining the use of nanoparticles and infrared heat to specifically target colorectal cancer cells.  The nanoparticles are comprised of a gold core sandwiched between two pieces of iron-oxide which form a shape that resembles a dumbbell, and antibodies attached to the nanoparticles cause it to seek out a molecule that is only found in colorectal cancer cells.  The iron-oxide is utilized in the nanoparticle because researches believe they will be able to use its magnetic properties to track the patients' cancer treatment via magnetic resonance.  Once attached to the cancerous cells, low-energy infrared light is used to apply heat. This is amplified by the nanoparticles, killing the cancer cell whilst sparing surrounding healthy tissue.  This method has the possibility of greatly reducing or even eliminating the need for the high doses of toxic chemicals or radiation currently used in cancer treatment.  The results have shown a three-fold increase in cancerous cell death and a substantial, although not complete, reduction of tumor size after 30 days.

Stanford and the CARBIO partnership in the EU have been developing a treatment process that utilises carbon nanotubes modified with an RNA sequence to hunt down and attack cancer cells.  At first these nanotubes triggered an immune response and were rejected by the human body; amazingly enough this was easily countered by adding in a string of DNA in the same fashion as the RNA. Unfortunately the method did not fully address the destruction of cancer cells and as such is still a work in progress - however the nanotubes do have the ability to deliver other molecules, such as chemotherapy drugs. Researchers at MIT have developed a method of attack against breast cancer tumors using nanotubes to deliver doxorubicin, an anti-cancer drug. The strand of RNA then "turns off" one of the genes the cancer cells use to resist doxorubicin, making it more effective. So far this method has been extremely successful in shrinking breast cancer tumors in mice, and the researchers believe it could be adapted to treat other forms of cancer.

Though this research is still in its infancy, it is not a matter of "if" but rather "when". The successful use of nanotechnology in cancer treatment will be a breakthrough for biomedical healthcare research.  Nanoparticles would provide the option of treating a person with a single high-potency dose of anticancer drugs that would specifically target only cancer cells.  This process would allow patients to receive treatment quickly and with drastically reduced side effects compared to traditional chemotherapy.  Whilst human trials have not yet begun, there is a real possibility that the severe ailments that coincide with chemotherapy like hair loss, digestive problems and mouth ulcers would be greatly reduced.