How Figure Skating Can Change Your Brain 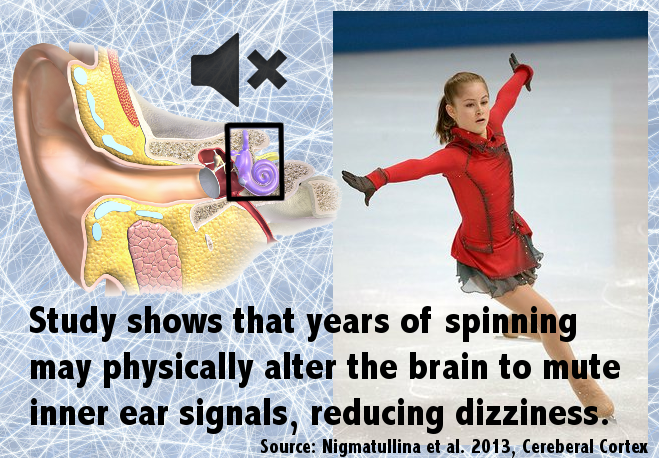 Despite failing to capture gold, Russian figure skater Yulia Lipnitskaia was perhaps the best spinner at the 2014 Winter Olympics in Sochi. For the final spin of her routines, she began on one leg, crouched, switched feet, and stood back up while pulling the other leg over her head. And all this was done at upwards of 200 rotations per minute (RPM)! Considering that I get dizzy after just a few spins in my office chair, this really amazed me. How can she spin that fast for that long without becoming unbearably nauseous?

A 2013 study published in the journal Cerebral Cortex suggests that Yulia’s brain is probably a bit different than mine. Years of spinning practice may have actually conditioned her brain to ignore dizzying signals. Every time we move, our “vestibular system” keeps track of it. Fluid sloshes around the inner ear, overtop tiny hair cells that sense the fluid and relay its movement to the brain as electrical signals.

When you spin rapidly and stop, the fluid in your inner ear continues to move. The tiny hairs keeps communicating this motion, giving you the sensation that you're still spinning. Inner ear signals are processed by a particular site in the brain called the “vestibular cerebellum”. Vital for balance and spatial orientation, this is the oldest part of the brain in evolutionary terms. The 2013 study, carried out at Imperial College London, examined the brain activity of ballet dancers and found that they actually had smaller vestibular cerebellums compared to a control group.

It’s not useful for a ballet dancer to feel dizzy or off balance. Their brains adapt over years of training to suppress that input. Consequently, the signal going to the brain areas responsible for perception of dizziness in the cerebral cortex is reduced, making dancers resistant to feeling dizzy

This is astounding when you consider that their brain structures are being altered to suppress signals that are otherwise fundamental to maintaining balance. Figure skaters and dancers can get away with this because of the muscle memory they've built up by practicing their maneuvers countless times. Perhaps most significantly, these findings open the door for new treatments of chronic dizziness because they suggest that one’s susceptibility to dizziness can be changed over time.

However, an important caveat is that selection bias can’t be completely ruled out by this particular study. Rather than the brain actually changing over time, dancers may just be predisposed to having such a brain structure to begin with. This is still interesting, of course, but it doesn’t bode quite as well for sufferers of chronic dizziness. The researchers did find a correlation between differences in the dancers' brains and their levels of experience, which implies a change over time, but more evidence is needed to confirm the result.