Delivery Drones: Here's the Latest On What Amazon Prime Air Can Do 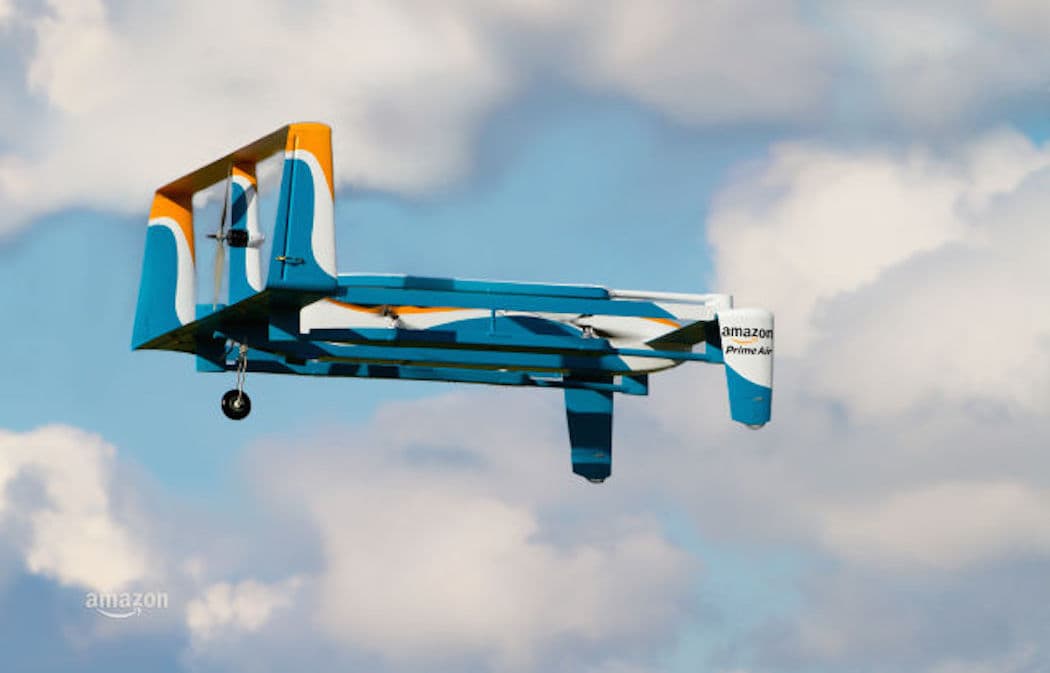 As the world awaits the implementation of various drone delivery services planned by major retailers, Amazon reveals what consumers can expect from their Amazon Prime Air.

"So Prime Air is a future delivery service that will get packages to customers within 30 minutes of them ordering it online at Amazon.com," Paul Misener, Amazon’s vice president for global public policy told Yahoo News.

"The goals we’ve set for ourselves are: The range has to be over 10 miles. These things will weigh about 55 pounds each, but they’ll be able to deliver parcels that weigh up to five pounds. It turns out that the vast majority of the things we sell at Amazon weigh less than five pounds."

These seem like reasonable assertions; however, Misener still has yet to give details on when their drone delivery system will be deployed.

Realistically, it has to contend with FAA approvals for commercial use in the US and Civil Aviation Authority in the UK. So all of this might take some time, and it might not be held back by technical limitations, but governmental ones.

Apart from regulatory challenges, certain hypothetical scenarios have come to light that bring attention to the safety and efficiency of drone use for commercial deliveries.

For instance, with Amazon and other retail behemoths looking into drones to make deliveries, urban airspace will now be saturated with buzzing drones.

"We were thinking: Manned aircraft above 500 feet. Between 400 and 500 feet there’d be a no-fly zone—a safety buffer," he said. "Between 200 and 400 feet would be a transit zone, where drones could fly fairly quickly, horizontally. And then below 200 feet, that would be limited to certain operations. For us, it would be takeoff and landing. For others, it might be aerial photography. The realtors, for example, wouldn’t need to fly above 200 feet to get a great shot of a house," Misener says as he explained proposed the concept of layered airspace to address this issue.

Another scenario would be malicious vandals who simply want to mess with the technology by say, shooting at it.

But Misener isn’t fazed. "I suppose they could shoot at trucks, too," he said. "We want to make the deliveries. And we believe that these Prime Air drones will be as normal as seeing a delivery truck driving down the street someday. So the novelty will wear off."

It remains to be see whether or not delivery drones will be rolling (flying) down our streets any time soon. But the Amazon execs are convinced that they technology is on the horizon. Now it's up to the governments to see if they can keep up.

Read This Next
FROM THE DEPT. OF THINGS TO BUY
The Best Science Gifts of 2022
Drone Tanker News
The US Navy Just Used a Drone to Refuel a Fighter Jet in Midair
Killer Copter
Middle Eastern Nation First to Buy Drone Armed With Machine Gun
Typical Day In Russia
Watch Russia's New Shotgun-Wielding Drone in Action
Keep Up
Wireless Charging Tech Lets Drones Stay Aloft Indefinitely
More on Robots & Machines
FROM THE DEPT. OF...
Tuesday on futurism
The Best Smart TVs in 2022
FROM THE DEPT. OF...
Dec 1 on futurism
The Best Wired Earbuds in 2022
FROM THE DEPT. OF...
Dec 1 on futurism
The Best Gifts For Gamers in 2022
READ MORE STORIES ABOUT / Robots & Machines
Keep up.
Subscribe to our daily newsletter to keep in touch with the subjects shaping our future.
+Social+Newsletter
TopicsAbout UsContact Us
Copyright ©, Camden Media Inc All Rights Reserved. See our User Agreement, Privacy Policy and Data Use Policy. The material on this site may not be reproduced, distributed, transmitted, cached or otherwise used, except with prior written permission of Futurism. Articles may contain affiliate links which enable us to share in the revenue of any purchases made.
Fonts by Typekit and Monotype.