Deadly Planets You’ll Never Want to Live on (or Even Visit): 16 Cygni Bb 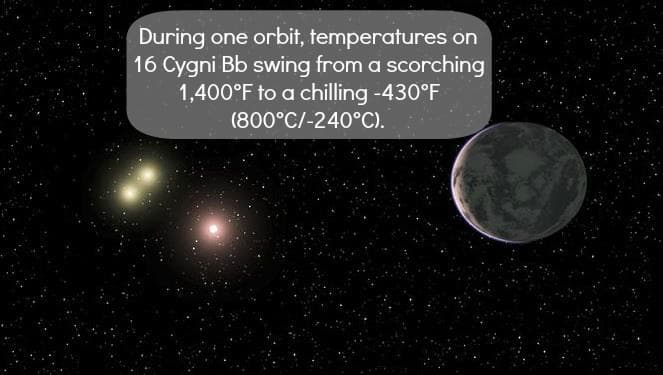 In the constellation Cygnus (the Swan), there is a planet that makes Pluto’s orbit seem almost normal.

In 1996, astronomers at the McDonald Observatory looked to 16 Cygni, a triple star system located some 69 light-years from Earth. They were specifically interested in 16 Cygni B, the second brightest star in the system. This star has a spectrum that is almost identical to that of the Sun (meaning that 16 Cygni B is, for all intents and purposes, our Sun’s solar twin). The astronomers noticed an odd wobble in the star, and soon after, they discovered a planet. The Jupiter-like world that was found orbiting 16 Cygni B was dubbed 16 Cygni Bb (admittedly, not the most inventive name). But although its name isn’t very original, the planet itself is—16 Cygni Bb has an orbit that’s out of this world (pun intended).

Because of the gravitational interactions of the three stars in this system, 16 Cygni Bb has a wild orbit. The best way to describe the eccentric revolution of this planet is by referencing a yo-yo. Every year, the planet hurtles in towards the star, making its closest pass some 25 million miles (40 million km) from the solar surface. That’s about a million miles closer than Mercury, a frighteningly hot place. Then it slings out into the distant solar system, reaching a point more than 200 million miles from 16 Cygni B (a distance roughly the equivalent of Jupiter’s orbit, which is a rather chilly part of the system).

This elongated orbit means that 16 Cygni Bb has some strange seasons.

As it makes its closest approach, the planet is torched by its star; temperatures exceed 1,400 degrees Fahrenheit (800°C). As 16 Cygni Bb travels further away, temperatures become temperate… and then freezing, reaching -430°F (-260°C). This deep freeze lasts some 17 months; then things start to warm up again, and then boil… year after year, this cycle of warming and freezing repeats and repeats and repeats. Of course, humans could never live here. Our flesh would burn off in the summer, and the frostbite brought on by winter would be equally deadly. In fact, these extreme changes don’t sound conducive to any form of life.

But would it really be impossible for bacteria or other hardy organisms to withstand these unearthly temperature differences? Perhaps some life form has evolved so that it hibernates throughout the blistering summer and glacial winter, thriving only in the few short months that the planet passes through the star's habitable zone.

16 Cygni Bb may not have the best living conditions but, if life is to survive in a triple star system like this one, these are the kinds of problems that need to be surmounted.

This article is third in a three-part series. Read Part I here and Part II here.