The World of the Dead: Meet Osiris 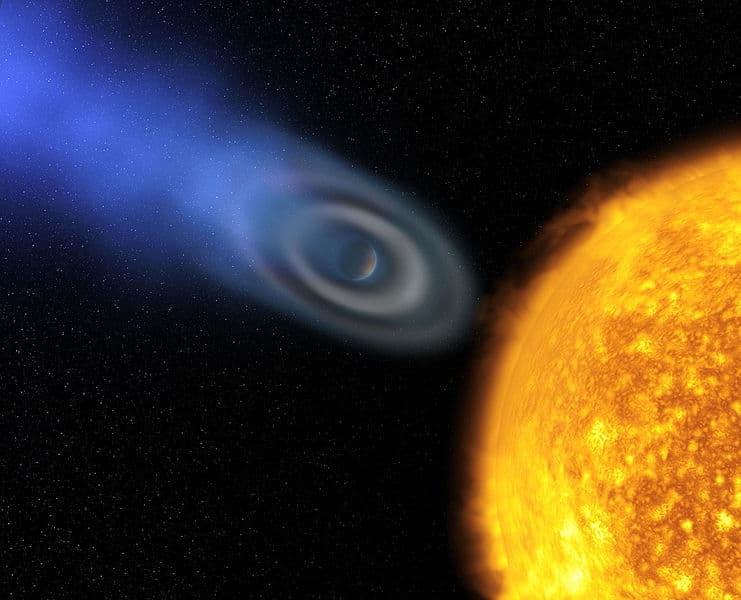 In 2001, the Hubble Space Telescope was directed towards a star in Pegasus, and a wobble was discovered. This observation led to the discovery of HD209458 B—Osiris, the planet that is fittingly named after the Egyptian god of the dead (because that’s what you’d be if you ever visited).

Osiris is a “hot Jupiter”, which means that it is big and extremely close to its star.

With temperatures towards the core of the planet exceeding 3,600°F (2,000°C), Osiris makes a swim in the center of an active volcano seem like a treat. Even worse, the enormous envelope of hydrogen, carbon, and oxygen that surrounds this planet reaches 17,500°F (almost 10,000°C). That’s almost 5,000 degrees hotter than many regions on our own Sun, which means that you’d fry long before you even got close to the planet.

Unfortunately, this amazingworld is dying.

Although it is over 200 times more massive than the Earth, and larger than the planet Jupiter, this beast is literally being blown away. Since Osiris is so close to the solar surface, more than 500,000 metric tons (1.1 billion pounds) of air is ripped away from the planet every second.

So saying that you’d be swept away is an understatement of epic proportions.

But there is an upside to Osiris’ death.

Because the planet has such a bloated atmosphere, scientists were able to measure its composition. This marked the first time that we have been able to determine the atmospheric composition of an extrasolar planet. Interestingly, this planet has many of the basic building blocks for life: sodium, hydrogen, carbon, and oxygen.

Of course, Osiris is far too hot for life as we know it… but what about life as we don’t know it? Well, anything is possible.

This article is part of a three-part series. See Part II here and Part III here.