We have our doubts. 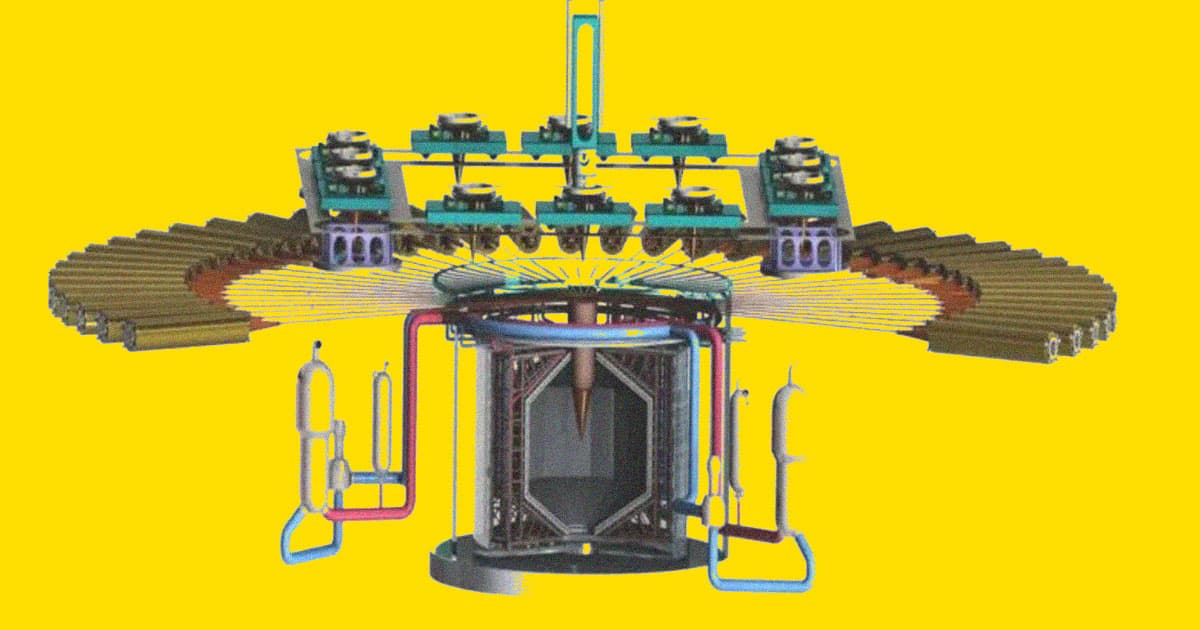 China says that it will start generating fusion power using the world's largest pulse-powered energy plant by 2028, thereby turning fusion energy into a reality — an eyebrow-raising claim, considering the decades of research and billions of dollars that have already been poured into doing just that.

"Being the world’s first to achieve energy-scale fusion release will lay the most important milestone in the road to fusion energy for human beings," said Peng Xianjue, a professor at the Chinese Academy of Engineering Physics, the nation's top nuclear weapons scientist, per the South China Morning Post.

Long a pipe dream that was more the subject of science fiction than actual science, the prospect of clean nuclear fusion energy, generated by the force of atom nuclei fusing together, has tantalized scientists for almost a century.

Over the past few years, researchers and a growing number of startups have made claims about bringing the world closer and closer to nuclear fusion — but the reality is far less impressive than that, with expensive reactors still requiring far more energy to get started than they are able to put out.

China's new reactor will essentially replicate the detonation of a thermonuclear bomb by producing powerful electric pulses. These pulses generate enough pressure to fuse atoms together, a process which releases energy.

But it won't be the first of its kind, and the history of the tech serves to tamp down the hype around this new project. In fact, all the preceding "Z-pinch" reactors that have been built around the world so far have failed to generate more energy than they needed to produce these pulses, as the SCMP reports.

Oddly, the plan is for the fusion reactor to power a more traditional fission nuclear facility, a stepping stone for the future adoption of commercial fusion energy tech.

After being completed in 2025, the claim is that the plant will go on to produce nuclear fusion energy by 2028, tech that will be ready for commercial adoption by 2035, according to Peng — a highly ambitious timeline, to say the least.

To date, only a few countries have offered a nuclear fusion timeline anywhere near as ambitious as this one, but China is certainly invested in the tech.

In the beginning of 2022, China claimed to have broken its own record when its "artificial Sun" reactor sustained temperatures a whopping ten times hotter than the Sun for more than 17 minutes straight, blowing previous records out of the water.

The record, however, was set by a very different kind of fusion reactor, which relies on more conventional approaches to fusion energy, heating up plasma inside a donut-shaped reactor called a "tokamak" to extreme temperatures and pressure.

It's difficult to say what to make of this latest announcement, especially given China's secrecy surrounding its scientific institutions, not to mention its military.

Nevertheless, if China is anywhere as close to nuclear fusion as it claims, the technology could present a major paradigm shift as the world continues to suffer from energy shortages and the effects of climate change.

But given the seemingly insurmountable challenges involved in turning fusion energy into a reality, we have our doubts.

Read This Next
Dam Straight
China Says It's 3D Printing a 590-Foot Hydroelectric Dam With Zero Human Labor
Climate Change Chats
How to Talk to Your Family About Climate Change
Fusion Update
Chinese Scientists Say They've Discovered Cheap New Way to Do Nuclear Fusion
It’s Getting Hot In Here
China's "Artificial Sun" Fusion Reactor Just Set a World Record
Great Balls of Fire
"Radioactive Gobstoppers" Could Stop the Next Nuclear Reactor Meltdown
More on Earth & Energy
Going Hydrogen
6:44 PM on the byte
Airbus to Strap Hydrogen Fuel Cell Engine to Massive Superjumbo Jet
Wolfenstein
Yesterday on the byte
A Brain Parasite Is Making Wolves Into Pack Leaders, Scientists Say
LED Down the Wron...
Yesterday on the byte
Defective LED Streetlights Are Turning the Night Purple
READ MORE STORIES ABOUT / Earth & Energy
Keep up.
Subscribe to our daily newsletter to keep in touch with the subjects shaping our future.
+Social+Newsletter
TopicsAbout UsContact Us
Copyright ©, Camden Media Inc All Rights Reserved. See our User Agreement, Privacy Policy and Data Use Policy. The material on this site may not be reproduced, distributed, transmitted, cached or otherwise used, except with prior written permission of Futurism. Articles may contain affiliate links which enable us to share in the revenue of any purchases made.
Fonts by Typekit and Monotype.