Breakthrough In Making Superconductors That Work At Room Temp 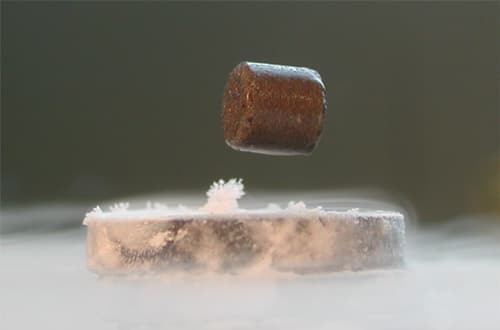 Superconductivity is, quite frankly, pretty remarkable. Through superconductivity, we can transport electric current without any resistance and, as a result, without any losses. This means that we can move things at extreme speeds. This may not seem terribly helpful in our everyday lives (as it doesn't exactly help us shoot a car cross the globe in a matter of seconds). However, it has a much larger impact on you than you might think.

For starters, they are used in particle accelerators. The most famous particle accelerator, the Large Hadron Collider (LHC), discovered the Higgs Boson just a year ago. And this physics has a huge impact our our everyday lives. Ultimately, the experiments being done at the LHC, and similar accelerators, are allowing us to better understand the cosmos and how it operates. Not only does this lead to a more comprehensive view of the universe and our place within it, it leads to new technologies and innovations.

However, the materials must be cooled to very low temperatures for superconductivity to work (very, very low).  And cooling like this takes a lot of time, energy, and money. But a recent experiment may change all of this.

For the first time, with the aid of short infrared laser pulses, researchers have succeeded in  superconducting at room temperature. Okay, so it only lasted for a few millionths of a microsecond. But it's still a great leap forward. And now, an international team has presented a possible explanation of the effect in the journal Nature.

In short, the scientists believe that laser pulses cause individual atoms in the crystal lattice to shift briefly and thus enhance the superconductivity. Ultimately, their findings could assist us in developing materials which become superconducting at significantly higher temperatures, which may help us develop a great many new applications.

The researchers at the Max Planck Institute offer the technical details:

In the beginning, superconductivity was known only in a few metals at temperatures just above absolute zero at minus 273 degrees Celsius. Then, in the 1980s, physicists discovered a new class, based on ceramic materials. These already conduct electricity at temperatures of around minus 200 degrees Celsius without losses, and were therefore called high-temperature superconductors. One of these ceramics is the compound yttrium barium copper oxide (YBCO). It is one of the most promising materials for technical applications such as superconducting cables, motors and generators.

The YBCO crystal has a special structure: thin double layers of copper oxide alternate with thicker intermediate layers which contain barium as well as copper and oxygen. The superconductivity has its origins in the thin double layers of copper dioxide. This is where electrons can join up to form so-called Cooper pairs. These pairs can "tunnel" between the different layers, meaning they can pass through these layers like ghosts can pass through walls, figuratively speaking – a typical quantum effect. The crystal only becomes superconducting below a "critical temperature", however, as only then do the Cooper pairs tunnel not only within the double layers, but also "spirit" through the thicker layers to the next double layer. Above the critical temperature, this coupling between the double layers is missing, and the material becomes a poorly conducting metal.

Physicists were able to solve the mystery with an experiment at the LCLS in the US, which is the world's most powerful X-ray laser. Max Planck physicist Roman Mankowsky, lead author of the current Nature study, explains, "We started by again sending an infrared pulse into the crystal, and this excited certain atoms to oscillate. A short time later, we followed it with a short X-ray pulse in order to measure the precise crystal structure of the excited crystal."

The result was exactly what the hoped for. The infrared pulse excited the atoms to oscillate and shifted their position in the crystal as well. This briefly made the copper dioxide double layers thicker - by two picometres, or one hundredth of an atomic diameter - and the layer between them became thinner by the same amount. "This in turn increased the quantum coupling between the double layers to such an extent that the crystal became superconducting at room temperature for a few picoseconds."

The new result helps to refine the still incomplete theory of high-temperature superconductors. "It could assist materials scientists to develop new superconductors with higher critical temperatures. And ultimately to reach the dream of a superconductor that operates at room temperature and needs no cooling at all," says Mankowsky."