Get ready to participate in a brand new kind of economy. 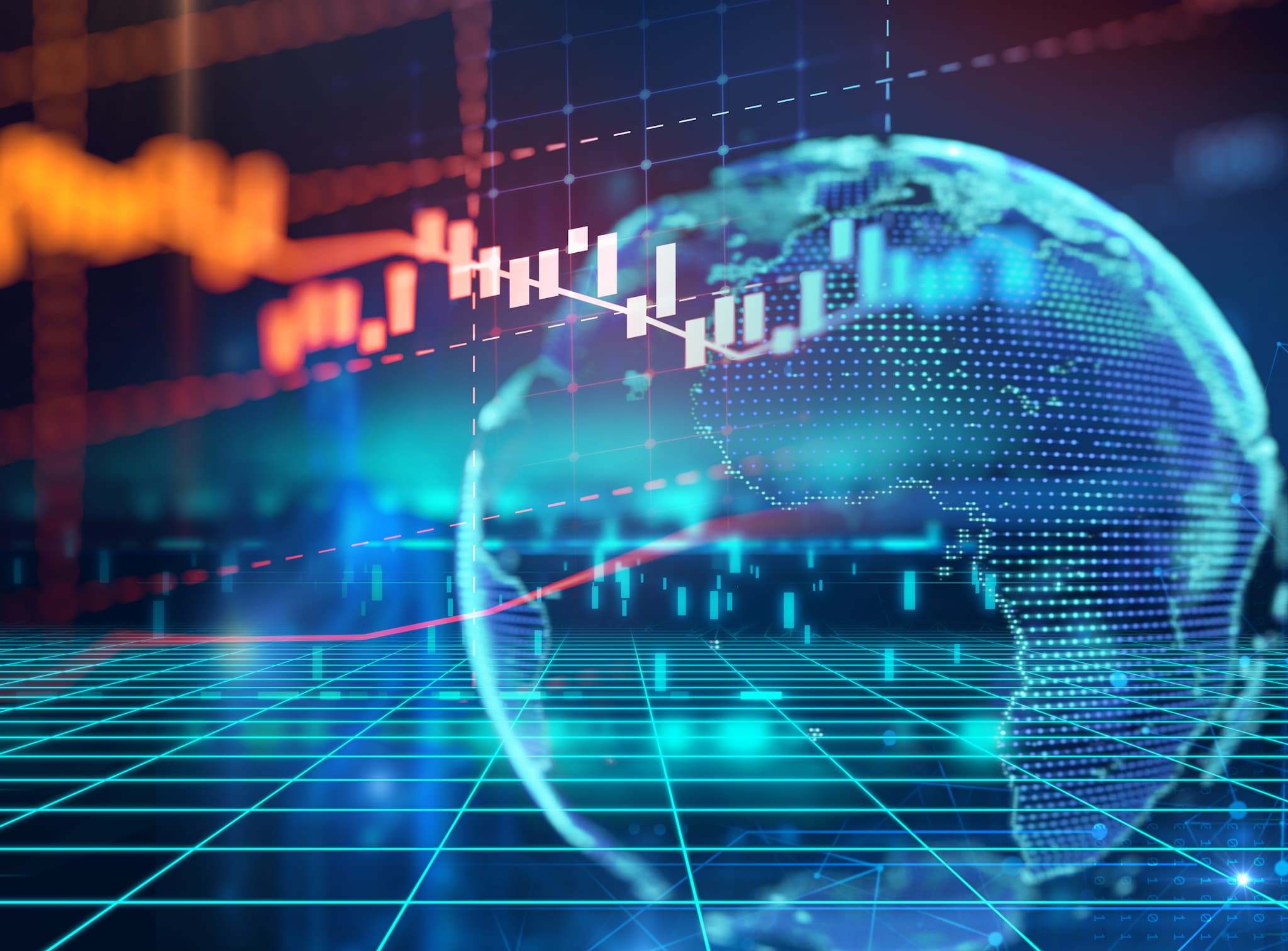 From our ancestors exchanging livestock tens of thousands of years ago to the brokers trading stocks on Wall Street today, bartering is a foundational aspect of human society. Throughout history, we have traded what we have for what we need, and through these transactions, we have survived.

As we made the transition from trading in cattle and grains to dollars and cents, we started relying more and more heavily on financial institutions such as banks, investment firms, and lenders to help us manage our assets. As of 2015, 93 percent of U.S. households had at least one checking or savings account, and that's not including the millions of people who also have mortgages, credit cards, or other ties to the finance industry.

For decades, nearly every aspect of our lives has involved a third-party financial institution in some way, but despite their ubiquity, these institutions are fundamentally flawed. Unexpected fees and slow transaction times can regularly leave users frustrated, but even those problems are relatively benign compared to other, more foundational issues.

Because they store data on centralized servers, banks and other traditional financial institutions are susceptible to security breaches. In some cases, those breaches can lead to the loss of huge sums of money, such as when hackers stole $80 million from Bangladesh’s central bank in 2016. In other instances, identities are the target, like when a Brazilian bank's website was hijacked for five hours in April, during which account holders willingly supplied the hackers with sensitive personal information.

These institutions also have barriers to entry that prevent some from participating in them. For example, a single past mistake like a bounced check can leave a person blacklisted from opening a bank account for several years, and in some nations, such as Saudi Arabia, women aren't even allowed to open accounts without permission from their husbands.

For these reasons and others, a whopping 38 percent of the adult population worldwide doesn't have a bank account. That's roughly 2 billion people who are largely unable to participate in the world economy as it currently operates.

Thankfully, an alternative to traditional finance has emerged in the form of the blockchain.

A blockchain is a distributed digital ledger, which means it doesn't have one centralized authority verifying and recording transactions (like a bank or a brokerage does). Instead, when two parties want to trade blockchain assets (better known as cryptocurrencies), the request is sent out to a network of computers. These "nodes" individually verify and record the transaction on their identical copy of the ledger, and a group of these transactions will become one timestamped block on the blockchain.

This process can be completed within seconds, and because it is distributed (and not confined to one central server), a blockchain is protected against the security issues that plague traditional finance institutions. Anyone can participate in the blockchain economy, and transactions can be completed anonymously, further protecting individuals' identities.

Over the last year, these various benefits have caused interest in cryptocurrencies to skyrocket. From a relatively paltry $17 billion in January, the global cryptocurrency market cap has grown to $126 billion. Wall Street traders are turning their attention to cryptocurrency exchanges, and instead of debit cards, customers are now using their crypto wallets to buy everything from coffee to video games.

Despite this growth, however, the blockchain economy is still in its nascent stages, and all of the kinks haven't been worked out yet.

One of the biggest issues involves how cryptocurrencies are traded. While the blockchain itself is decentralized, the major exchanges used for the buying and selling of assets are not. That means that, just like banks, these exchanges are susceptible to security breaches, so when traders entrust them with their funds, they are leaving themselves vulnerable. In fact, just a few months ago, one of the largest bitcoin exchanges was hacked, compromising the data of 30,000 customers and leading to the loss of an estimated $870,000.

Because trading is spread out over dozens of exchanges, individual exchanges can also have problems meeting volume demands as interest in crypto grows. This lack of liquidity can force traders to pay higher fees, as well as lead to "flash crashes" that can send the value of a cryptocurrency plummeting from hundreds of dollars (or more) down to mere cents in just a single second.

Of course, there have been attempts to make decentralized exchanges, but these, too, are problematic. For example, they have inherently higher latency, higher fees, less fluidity, and an increased potential for unfairness than centralized exchanges.

But new, alternative ways to exchange cryptocurrencies are emerging, and they could help solve many of the ongoing issues. One of these newest contenders is AirSwap, which is a platform that is built off of a truly peer-to-peer model.

AirSwap is a new way to trade Ethereum tokens. Unlike bitcoin, which is essentially a form of digital money, a token offers its holder some utility within a system, such as voting power, access to special features, or an amount of a virtual currency. Because Ethereum's decentralized platform was designed specifically to support token networks, it has become the go-to blockchain for anyone looking to launch a new token.

When ready to trade these tokens, members of the AirSwap community can announce that they are interested in trading and connect directly with other members — no third party required. To ensure they’re getting a fair deal, AirSwap provides real-time price suggestions before committing to a transaction, both for sellers and buyers.

AirSwap members can even build their own storefronts, creating new ERC20 tokens from the ground up and seamlessly bringing them to market.

Because tokens are in the possession of either the buyer (the "maker" of the order) or the seller (the "taker" of the order) right up until a smart contract is executed on the Ethereum blockchain, the AirSwap protocol eliminates the opportunity for theft provided by centralized exchanges. Liquidity is no longer a problem either, as sellers aren't beholden to the asset price set by the exchange. Because each deal is negotiated directly between the two parties and not set up through the blockchain, the problems of decentralized exchanges are also eliminated.

AirSwap takes everything that makes the blockchain itself revolutionary — its high level of security, lack of a centralized authority, and low barrier to entry — and applies it to the trading of blockchain assets. All that token traders need to do to take advantage of this new decentralized exchange is purchase the AirSwap Token (AST), which will launch on October 10. After that, they’ll be free to use AirSwap to frictionlessly manage their tokenized assets in this new era of finance. To learn more about registering for the sale, you can head here.

The preceding communication has been paid for by AirSwap, and Futurism has a small financial stake in AirSwap’s token launch. This communication is for informational purposes only and does not constitute an offer or solicitation to sell shares or securities in AirSwap or any related or associated company. The AirSwap tokens are not being structured or sold as securities or any other form of investment product, and consequently, none of the information presented herein is intended to form the basis for any investment decision, and no specific recommendations are intended. This communication does not constitute investment advice or solicitation for investment. Futurism expressly disclaims any and all responsibility for any direct or consequential loss or damage of any kind whatsoever arising directly or indirectly from: (i) reliance on any information contained herein, (ii) any error, omission or inaccuracy in any such information or (iii) any action resulting from such information.

Each recipient of this communication expressly acknowledges that the AirSwap tokens are being sold solely for the purpose of providing purchasers of such tokens with access to the services associated with the tokens, and that such persons are not being offered, and will not be purchasing, any tokens for any other purposes, including, but not limited to, any investment, speculative or other financial purpose. Each recipient further acknowledges that they are aware of the commercial risks associated with AirSwap and the network associated with its tokens.