There's something very ironic about the title of the painting. 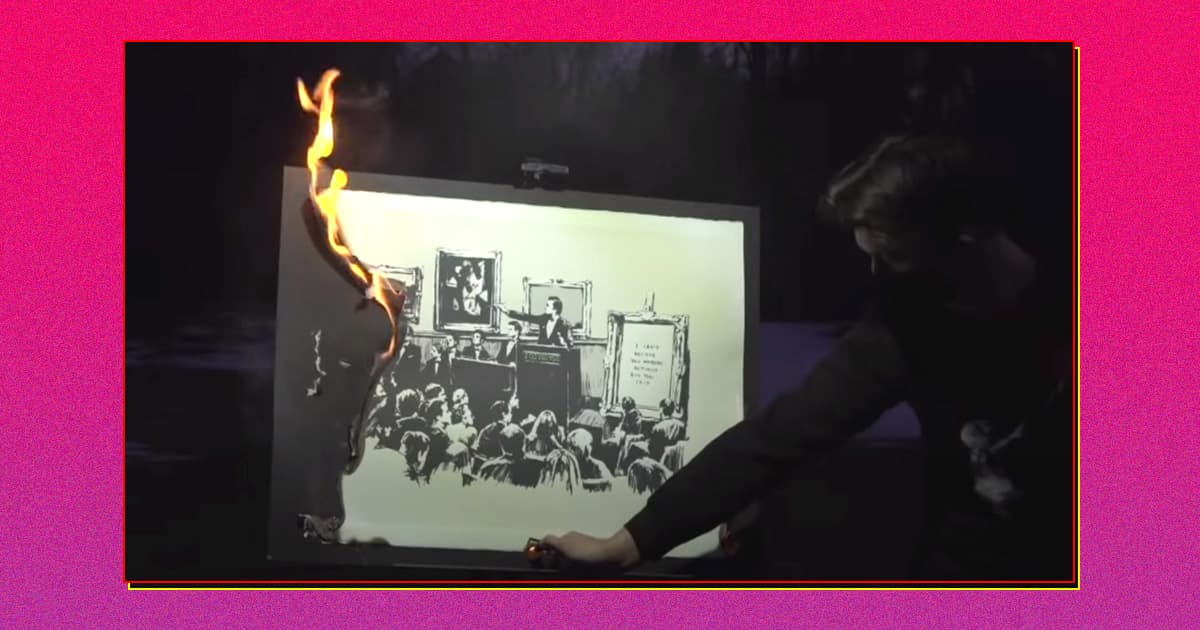 An original by world famous street artist Banksy was lit on fire during a livestream — and promptly sold for $380,000 worth of Ethereum as a non-fungible token (NFT), the BBC reports.

Ironically, the artwork, titled "Morons," is a critique of the fine art market itself. The black and white print shows an auctioneer at the auction house Christie's, the same auction that sold an NFT for $69 million earlier this week.

Next to the auctioneer is a framed image with the caption: "I can’t believe you morons actually buy this."

In case you need a quick primer, NFTs allow collectors to claim ownership over a digital work of art. You can think of it as a kind of blockchain-based passport or a representation of a given digital asset. It's meant to signify original ownership, even if the piece has already been copied a million times before.

The trend has taken the fine art market by storm over the last couple months, culminating in digital artist Beeple selling his "The First 5000 Days" piece for a cool $69 million at Christie's.

Critics of the Banksy-burning livestream called it out for being wasteful and tasteless.

"It's a total stunt, playing off the fact that these things are going for big money," Ossian Ward, author of the book "Ways of Looking: How to Experience Contemporary Art," told the BBC.

"You can say anything is a work of art," Ward added, "but if you burn a Banksy and then want money for it, that ranks pretty low on the art scale for me."

The people behind the burning, however, call the stunt "an expression of art itself," as Mirza Uddin, the spokesman for Injective Protocol, the blockchain company behind the stunt, told the British broadcaster.

"We specifically chose a Banksy piece since he has previously shredded one of his own artworks at an auction," Uddin added.

Injective Protocol is already planning its next steps.

"We’re already planning our next event in collaboration with a prominent artist," Uddin told CoinDesk. "Our aim is to bridge the world of traditional art with the world of NFTs. So, we’ll definitely be doing more to uphold this ethos."

The burning is a great example of the versatility of NFTs. The whole concept is meant to demonstrate that art ownership can take on many different forms, including an ownership stake listed on the blockchain.

It allows for a monetary value to be set for not just a physical representation, in the form of a framed painting or three-dimensional  sculpture, but something more abstract as well.

There are no guarantees, however; purchasing NFTs come with some inherent risks. The cryptocurrencies used to make the purchase are likely to fluctuate wildly, as they always have done.

It's still far too early to tell whether NFTs are the future of digital art collection. But when Banksys are already being sacrificed for the cause, more paintings are bound to land on the chopping block next.

More on NFTs: An NFT Painting Just Sold For $69 Million

Read This Next
Apes Ahoy
A Major NFT Project Is Falling Apart in a Storm of Lawsuits
Rube Goldbergian
The Dune NFT Project Is Back With an Inscrutable New Scheme
Wrong-Clicker
Knockoff eBay NFTs Are Kind of Based, Actually
Sad!
Melania Trump Accused of Secretly Buying Her Own NFT to Avoid Disgrace
Magic: The Reckoning
Maker of "Magic" Cards Sends Cease and Desist to Project Minting Unauthorized NFTs
More on Future Society
Gas Giant
5:25 PM on the byte
Journalist Eats Lab-Grown Chicken, Gets "Weirdly Gassy"
Musk Rats
Yesterday on the byte
Twitter Is Quietly Re-Suspending the Lunatics Elon Musk Let Back On
Going Wireless
Wednesday on futurism
Hackers Took Over a Subdomain of Wired.com for Several Months and Replaced It With Sleazy Online Casino Content
READ MORE STORIES ABOUT / Future Society
Keep up.
Subscribe to our daily newsletter to keep in touch with the subjects shaping our future.
+Social+Newsletter
TopicsAbout UsContact Us
Copyright ©, Camden Media Inc All Rights Reserved. See our User Agreement, Privacy Policy and Data Use Policy. The material on this site may not be reproduced, distributed, transmitted, cached or otherwise used, except with prior written permission of Futurism. Articles may contain affiliate links which enable us to share in the revenue of any purchases made.
Fonts by Typekit and Monotype.