Bio-Inspired Swarm Robots Can Form Structures Without a Blueprint

Each individual robot is as replaceable and programmable as a biological cell. 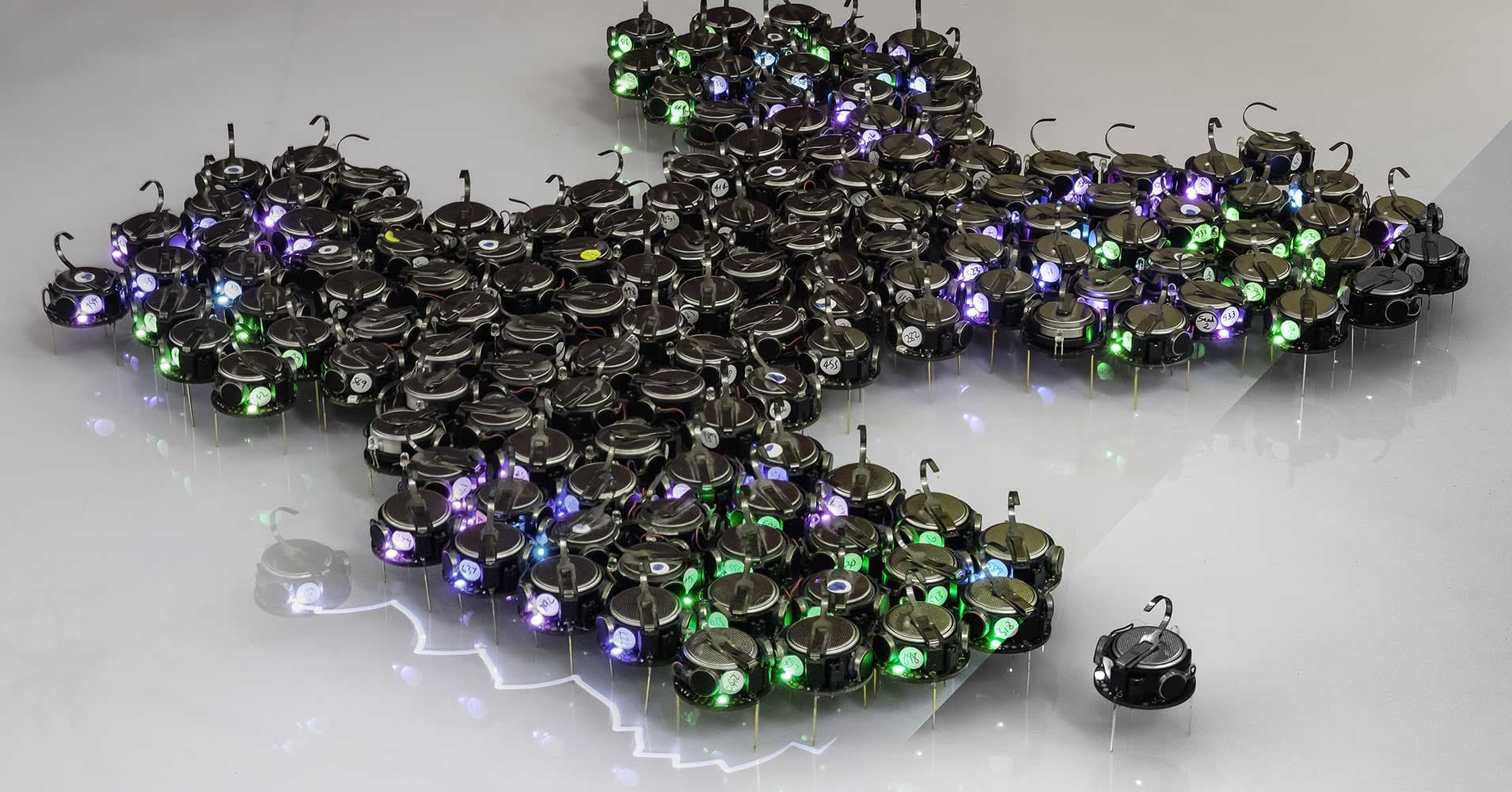 A new network of autonomous swarm robots can work together to form various structures and shapes, all without receiving any big-picture instructions or design blueprints.

Communicating locally like the cells in your body, the robots automatically concentrate in different places. The bots cluster and branch in different directions based on signals they sent to one another, according to research published Wednesday in the journal Science Robotics. The researchers hope the work could lead to networks of robots that build bridges or other structures to help with disaster relief efforts.

This new research from the European Molecular Biology Laboratory in Barcelona is the latest development in an organization called Swarm Organ's ongoing goal to create robots that act like biological cells and structures.

Just like cells communicate by releasing chemicals and detecting those released by their neighbors, the individual robots give off a short-range, infrared signal that only reaches about 10 centimeters.

Specifically, the robots broadcast a signal that tells other bots how much of a simulated substance called "morphogen" they contain. Morphogen is meant to be the virtual version of a biological signaling molecule — it's not a physical particle but rather each robot's code contains a different value for the amount of morphogen assigned to that bot.

In experiments where the swarm was set loose, each individual robot was instructed only to seek out a so-called "Turing spot," which the researchers defined as an area of high morphogen concentration, so bots with greater amounts of morphogen served as hubs towards which the others migrated.

The robots created some interesting shapes and structures. But there were also plenty of brand-new bugs — the physical robots in this new research sometimes messed up in ways that previous experiments, all based on computer simulations, did not. Sometimes, the researchers saw individual bots careen away from the cluster, perhaps in search of the great morphogen cluster in the sky.

This project is still in its early stages, but the researchers hope to someday develop a swarm of robots that can create three-dimensional structures just like biological cells form into tissues and organs or how colonies of ants can work together to create bridges and rafts.

More on swarm robotics: A Swarm of Autonomous Robots is Heading to an Ocean Near You

Read This Next
Diner Drama
People Furious at Robot Serving Pancakes at Denny's
Robot Violence
YouTube Accidentally Removed Robot Battle Videos for "Animal Cruelty"
Buzz Off
Tiny Spies: This Insect-Like Flying Robot is Smaller Than a Penny
Automating Gym Class
Toyota's Basketball Robot Can Nail Three-Pointers
Guardian Exoskeleton
The U.S. Military is Buying a Brutal-Looking Powered Exoskeleton
More on Robots & Machines
From the Dept. of...
12:00 AM on futurism
The Best Smart Lights of 2023
From the Dept. of...
Yesterday on futurism
The Best Mini Instant Pots of 2023
Setting a Bad Exa...
Tuesday on the byte
Multiple OSHA Violations Identified in Video of Boston Dynamics Robot Assisting Construction Worker
READ MORE STORIES ABOUT / Robots & Machines
Keep up.
Subscribe to our daily newsletter to keep in touch with the subjects shaping our future.
+Social+Newsletter
TopicsAbout UsContact Us
Copyright ©, Camden Media Inc All Rights Reserved. See our User Agreement, Privacy Policy and Data Use Policy. The material on this site may not be reproduced, distributed, transmitted, cached or otherwise used, except with prior written permission of Futurism. Articles may contain affiliate links which enable us to share in the revenue of any purchases made.
Fonts by Typekit and Monotype.