Even the most jaded will have to admit—these images are pretty spectacular. 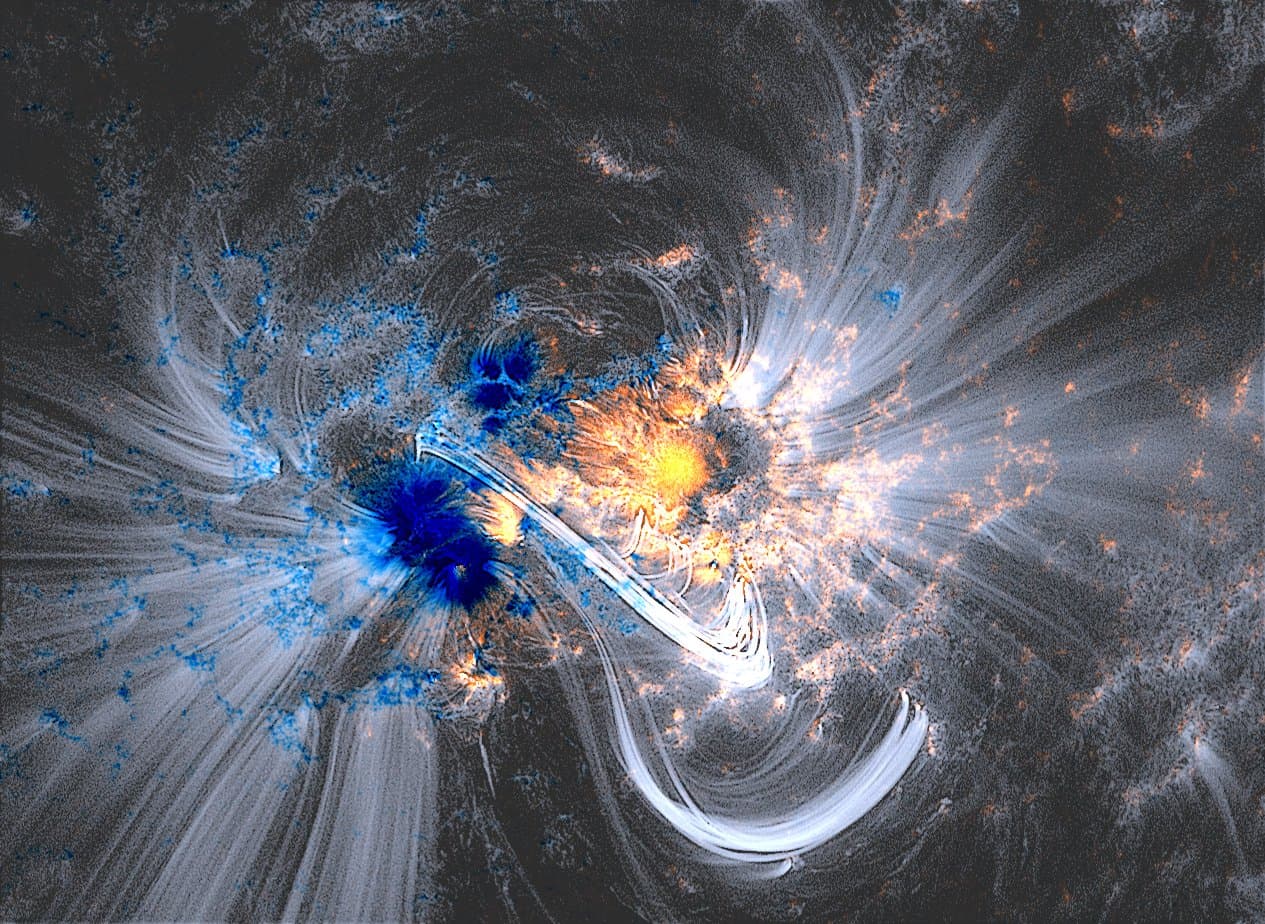 This amazing image from NASA's Solar Dynamics Observatory (SDO) shows the power of our Sun in searing detail. Here, researchers captured a view of two enormous sunspots glowing brightly in blue and yellow. The colors, of course, are not the same as what we would see if we were observing the event with our own eyes. However, this coloring isn't meant to make the image look better (though it does that quite well). Rather, the coloring highlights the differences in the Sun's magnetic field.

Ultimately, the sunspot in blue has an opposite charge of the sunspot that is shown in yellow. The ghostly, white lines that you see streaking out from the image are coronal loops, masses of hot gas that are following the path of the magnetic field lines connecting the two sunspots.

Ultimately, these magnetic field lines are the key to sunspots. Sunspots, dark areas on our star's surface, form as a result of concentrations of the magnetic field. Sunspots typically have a magnetic field that is some 1,000 times stronger than the surrounding area. This phenomenon inhibits convection (convection is heat transference from moving material) and results in a lower surface temperature.

Each of the sunspots shown here are large enough to completely swallow the Earth. This is actually fairly typical, as many sunspots are more than 31,000 miles in diameter (50,000 km). For comparison, the Earth is just 7,900 miles (12,700 km) in diameter.

The above video shows one of the largest sunspot recorded over the last 22 years (that's approximately how long a solar cycle lasts). It shows the surface of the Sun over a period of 17 days, from October 14th to 30th of 2014. The blemish shown here is sunspot AR 2192. Over the course of this period,  AR 2191 produced 6 X-class and 4 M-class solar flares. X-class flares are the largest class of flare.

Below, you can see a closer image of what sunspots look like. This image was captured by the New Solar Telescope operated by scientists from the Big Bear Solar Observatory. This is one of the clearest pictures of a sunspot ever taken and shows some exquisite detail (to me, it looks a little like the center of a sunflower).

Read This Next
Satan's Butthole
The Sharpest-Ever Image of a Sunspot Looks Like a Portal to Hell
Tiny Flares
Scientists Found Something Surprising in Closest-Ever Photos of the Sun
Say Cheese
A Space Probe Just Took the Closest Pictures of the Sun Ever
IRL Icarus
Scientists Mystified: Sun's Magnetic Field Appears to be Flipping
Lonely Planetesimal
Astronomers Discover Fragment of Planet Orbiting Its Dead Star
More on Hard Science
Tractor Beam
Jan 26 on the byte
Scientists Build Working Tractor Beam, Although It's Comically Tiny
Having a Blast
Jan 18 on the byte
New Study Shows Where You Should Hide to Survive a Nuclear Attack
Offworld Amino
Jan 15 on the byte
Scientists Find Building Blocks of Life in Meteor That Smashed Into Family's Driveway
READ MORE STORIES ABOUT / Hard Science
Keep up.
Subscribe to our daily newsletter to keep in touch with the subjects shaping our future.
+Social+Newsletter
TopicsAbout UsContact Us
Copyright ©, Camden Media Inc All Rights Reserved. See our User Agreement, Privacy Policy and Data Use Policy. The material on this site may not be reproduced, distributed, transmitted, cached or otherwise used, except with prior written permission of Futurism. Articles may contain affiliate links which enable us to share in the revenue of any purchases made.
Fonts by Typekit and Monotype.