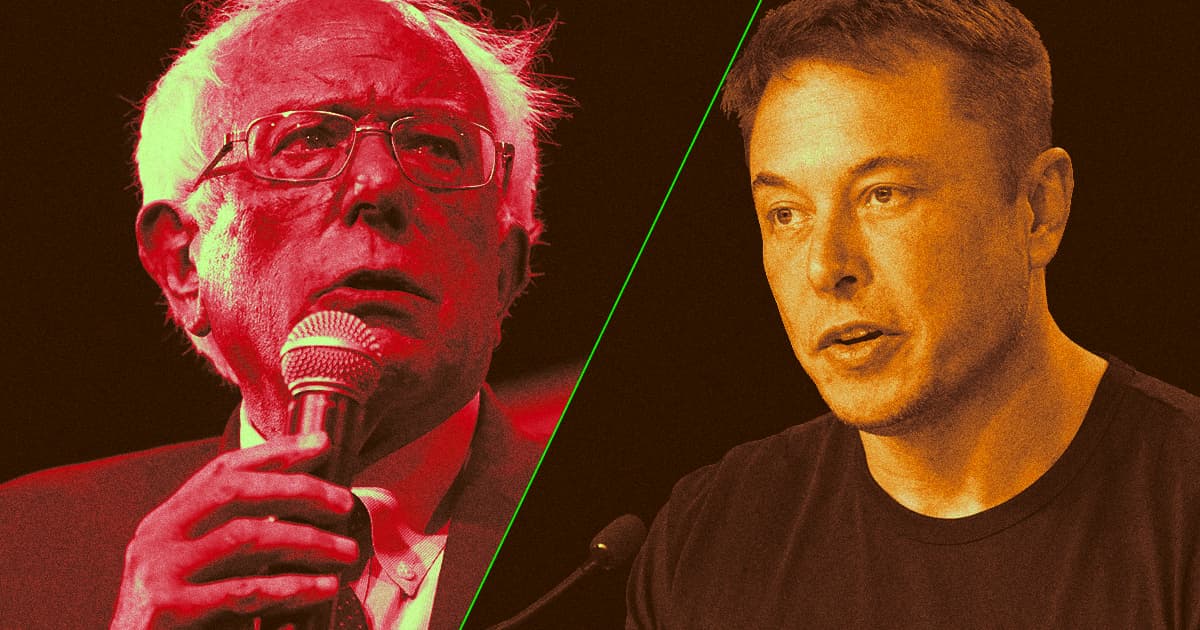 "Space travel is an exciting idea, but right now we need to focus on Earth and create a progressive tax system so that children don't go hungry, people are not homeless and all Americans have healthcare," Sanders said. "The level of inequality in America is obscene and a threat to our democracy."

The tiff — and its background, which we'll get into below — are a crystal-clear illustration of a widespread tension in contemporary views of the future: whether we should wait until everyone is taken care of on our home planet before taking on the incredibly expensive task of sending people to other worlds, or whether it's feasible to pursue both tasks simultaneously.

The spat between Sanders and Musk has been brewing since last week, when Bernie singled out Musk and fellow billionaire Jeff Bezos in an earlier tweeted missive.

"We are in a moment in American history where two guys — Elon Musk and Jeff Bezos — own more wealth than the bottom 40 percent of people in this country," Sanders said at the time. "That level of greed and inequality is not only immoral. It is unsustainable."

Musk, who's never been one to turn down a feud, fired back yesterday, asserting that "I am accumulating resources to help make life multiplanetary and extend the light of consciousness to the stars."

And that, naturally, was when Bernie clobbered him with the tweet about children going hungry.

The reality is that space travel is not currently an enormous drain on humanity's resources. NASA's budget is currently hovering around $22 billion annually, out of a national budget of nearly $5 trillion, and SpaceX's operation is significantly cheaper (though its ambitions are arguably just as large.)

Instead, Musk and Sanders seem to be hashing it out in anticipation of a future in which off-planet exploration is a vastly more expensive endeavor than it currently is. Like Sanders admitted in his tweet, that's an exciting prospect — but hopefully it can grow in tandem with a comprehensive social safety net.