Keep your music, photos, and everything else securely backed up for 95% off. 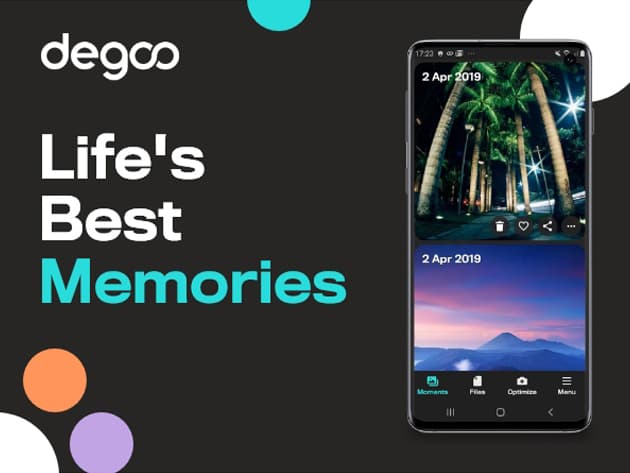 We generate a lot of data. According to a 2015 survey, we take 150 photos on our phones every month and have 600 sitting on our rolls. It's only a matter of time before iCloud or Google Drive runs out of space.

Add to this that as services fade-out, keeping the data we've made or bought from them is becoming more frustrating. The coming death of Google Music, for example, has left people who've bought albums through the service looking for a replacement in addition to porting their albums over to YouTube Music. Fortunately, you can back up 10TB worth of data for 95% off with the Degoo Premium: Lifetime 10TB Backup Plan.

Why Use An Independent Backup Service?

If you've got iCloud, Google Drive, or another service, you might wonder why you need another. The answer? Independence matters.

Google Music users don't get an option to pick another service or to store their music on Google Drive for a while. It's YouTube Music or nothing. And while most users may be fine with that, independent backups mean you have another option.

Secondly, transfers from service to service, even if they're on the same platform, are far from perfect. In 2016, for example, when Apple began introducing Apple Music, iTunes began mislabeling and seemingly "deleting" user's files when it found a "match" on Apple Music. Fortunately, the music wasn't deleted, just misfiled, but many users were still upset that an automated process could seemingly make their entire library disappear into thin air.

Finally, of course, there's the dreaded scenario where the service just goes under. MySpace, for example, lost literally everything from before 2016 due to a server migration error. True, perhaps some users were secretly relieved that many awkward photos from high school vanished, but why take that gamble with your family photos?

How Much Can 10TB Store?

To give you an idea of how much space one terabyte is, it's 1000 GB of space. Or roughly four to sixteen iPhone 11s worth of storage capacity, depending on whether you decided to save a little money and go with the 64GB one or splurge on the 256 GB. But let's say you're budget-conscious and will upgrade every three years or so.

If you got your first phone at 18 and backed it up to a Degoo Premium backup plan every time you switched instead of deleting anything. You'd have used up about 1.36TB of your space. Good thing you can use your backup plan for everything you own, including tablets, laptops, and other devices. You'll never lose a document, a photo, or a song again.

It's also easy to share your photos. Degoo has handy iOS, Android, and web apps that let you pop into your backups and go through to find just what you need. You can hit send, knowing that the service's 256-bit AES encryption will keep your data between you and your friends, whether you send it over email or drop a link in a text.

Nor will you have to stay on top of your backups, as automatic file change detection ensures that a backup kicks in right away. You can even replicate your backup, that is, make another copy and store it separately, to make doubly sure everything's protected.

Losing your photos, music, and documents can be devastating. But at $149, 95% of the MSRP, the Degoo Premium: Lifetime 10TB Backup Plan will both give you peace of mind, and make it easier to keep your files handy.

Read This Next
Brands We Love
Get Ahead With The Complete 2020 IT Certification Exam Prep Mega Bundle
Brands We Love
Cut Better Videos With This Adobe Premiere Pro Production Course Bundle
Brands We Love
Master One Of The Essential Coding Languages For Just $36 With This Java Bootcamp Bundle
Brands We Love
Get Hired As A Cybersecurity Expert By Learning Ethical Hacking
Brands We Love
Build A Coding Career With The 2020 Ultimate Web Developer and Design Bootcamp Bundle
More on Hard Science
Tractor Beam
Thursday on the byte
Scientists Build Working Tractor Beam, Although It's Comically Tiny
Having a Blast
Jan 18 on the byte
New Study Shows Where You Should Hide to Survive a Nuclear Attack
Offworld Amino
Jan 15 on the byte
Scientists Find Building Blocks of Life in Meteor That Smashed Into Family's Driveway
READ MORE STORIES ABOUT / Hard Science
Keep up.
Subscribe to our daily newsletter to keep in touch with the subjects shaping our future.
+Social+Newsletter
TopicsAbout UsContact Us
Copyright ©, Camden Media Inc All Rights Reserved. See our User Agreement, Privacy Policy and Data Use Policy. The material on this site may not be reproduced, distributed, transmitted, cached or otherwise used, except with prior written permission of Futurism. Articles may contain affiliate links which enable us to share in the revenue of any purchases made.
Fonts by Typekit and Monotype.