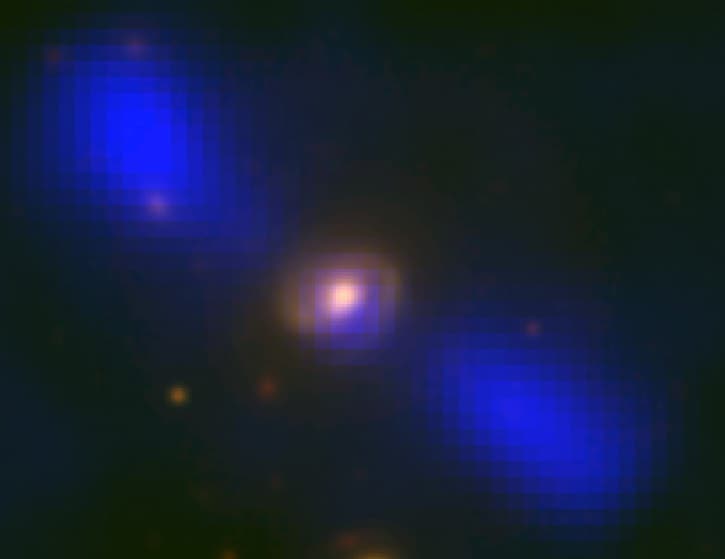 Galaxies come in all shapes, sizes and sorts, each yielding important clues about the first developmental milestones in the evolution of the universe, leading up to the current epoch. In a new report, a group of citizen scientists have discovered an extremely rare type of galaxy; one seen less than half a dozen times before. What's more is that the technique they used could help us find even more galaxies like this in the future.

The galaxy, dubbed J1649+2635, lurks about 800 million light-years from Earth. While it's technically a spiral galaxy by classification, like the Milky Way (sans the spiral bar), there are a few distinct differences. Namely, it happens to have long jets streaming from its poles, comprised of subatomic particles traveling at relativistic speeds. Sounds simple enough, right? After all, black holes are known to have similar jets. The problem, however, lies with the fact that spiral galaxies shouldn't be able to develop jets of this size.

"The conventional wisdom is that such jets come only from elliptical galaxies that formed through the merger of spirals. We don't know how spirals can have these large jets," remarked Minnie Mao, of the National Radio Astronomy Observatory (NRAO).

This makes J1649+2635 a rare breed. So rare, in fact, that it is only one of four spiral galaxies known to exude jets. The first of which — a galaxy called 0313-192 —was discovered in 2003 using radio telescope tools equipped aboard NRAO's "Very Large Array," with some of the leg work carried out by Hubble. It took almost a decade before the second galaxy — dubbed Speca by the researchers credited with its discovery — was found, this time using the Sloan Digital Sky Survey and the VLA. The other one is much more recent, found earlier this year using the same radio-optical technique.

"In order to figure out how these jets can be produced by the 'wrong' kind of galaxy, we realized we needed to find more of them," Mao said.

This help comes not in the form of new research, but in preexisting data that hasn't been sorted through yet. Since there is way more data to pick through than experts have the time for, they've since "contracted" amateurs to help sort through images that may be of significance. The project — which we've mentioned before, called Galaxy Zoo — centers on images taken as a part of the Sloan Digital Sky Survey. In many cases, the volunteers are asked to pour through the data and  classify each galaxy based on an established set of qualifications.

Since Galaxy Zoo's inception, citizen scientists have helped classify well over 700,000 galaxies, separating the spirals from the ellipticals, and the lenticulars from the irregulars. Building on the work of more than 150,000 people. the researchers employed the use of  a "superclean subset of more than 65,000 galaxies, for which 95 percent of those viewing each galaxy's image agreed on the classification." Of this galactic datapool, approximately 35,000 galaxies are spiral in nature, with J1649+2635 counted among them.

Then, the researchers cross-referenced the radio and optical light images (collected by the NRAO VLA Sky Survey and the Faint Images of the Radio Sky at Twenty Centimeters survey) of the galaxies in question, which ultimately revealed that J1649+2635 has twin radio jets.

"This is the first time that a galaxy was first identified as a spiral, then subsequently found to have large radio jets," Duffin said. "It was exciting to make such a rare find," he added. As to where the jets come from, the team explains:

"This galaxy presents us with many mysteries. We want to know how it became such a strange beast," Mao said. "Did it have a unique type of merger that preserved its spiral structure? Was it an elliptical that had another collision that made it re-grow spiral arms? Is its unique character the result of interaction with its environment?" He continued, "We will study it further, but in addition, we need to see if there are more like it."

"We hope that with projects like the Galaxy Zoo and another called Radio Galaxy Zoo, those thousands of citizen scientists can help us find many more galaxies like this one so we can answer all our questions,"

For now, Mao and the rest of the team have given these rare galaxies a befitting name, "Spiral DRAGNs," (an acronym for "Double-lobed Radio sources Associated with Galactic Nuclei.")

You can see the full press release here. or learn how you can join the fun at Galaxy Zoo here.