Astronomers Find Nearest Black Hole to Earth, and It's Strange

It's the "first stellar system with a black hole that can be seen with the unaided eye." 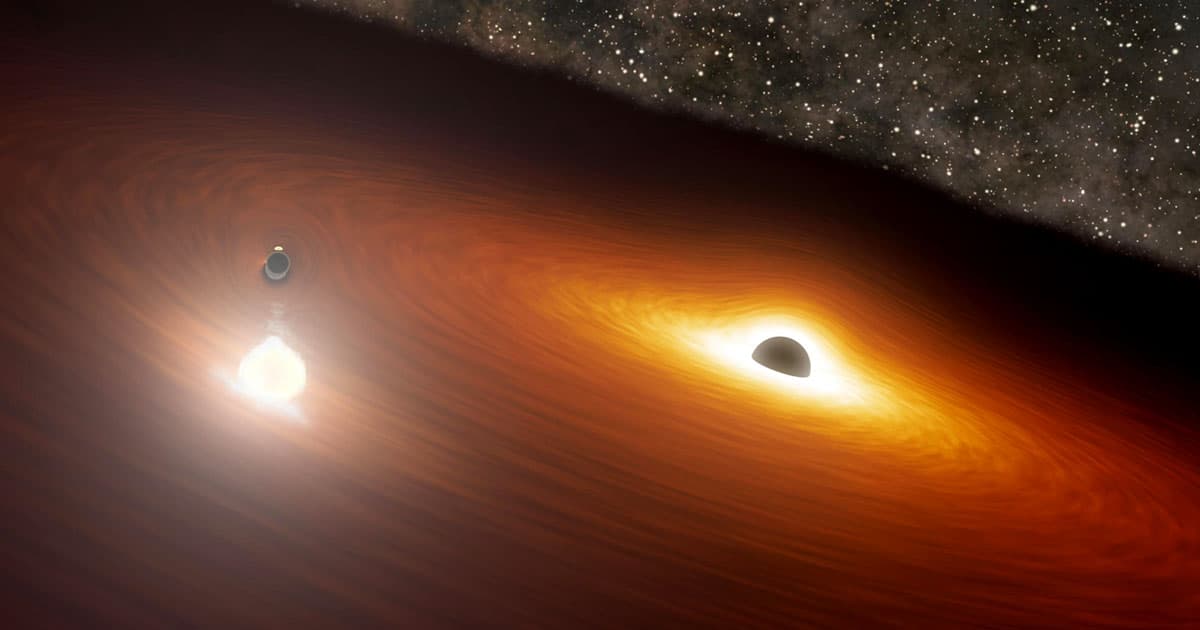 Astronomers from the European Southern Observatory (ESO) claim to have spotted the closest known black hole to Earth.

The black hole is only 1,000 light-years from Earth — so close, the system it's in can be seen in the southern hemisphere's night sky with the naked eye, according to the researchers.

"We were totally surprised when we realized that this is the first stellar system with a black hole that can be seen with the unaided eye," Petr Hadrava, scientist at the Academy of Sciences of the Czech Republic in Prague and co-author of the paper published in Astronomy & Astrophysics today.

The black hole was relatively difficult to spot because it's relatively dark. Black holes tend to flare up as they're feeding on the matter of companion stars, giving away their location. But this particular hole wasn't exhibiting that behavior.

That means the researchers only spotted it by tracking the gravitational effects a then-unknown object was exerting on two stars using a 2.2-metre telescope at ESO's La Silla Observatory in Chile.

The scientists originally became interested in the system, called HR 6819, because it had two very closely spaced stars.

One of the two stars of the system appeared to orbit the black hole every 40 Earth days. By studying its trajectory, they concluded that the black hole object was quite massive.

"An invisible object with a mass at least 4 times that of the Sun can only be a black hole," Thomas Rivinius, lead author and ESO scientist, said in the statement.

Of the handful of black holes discovered in our own galaxy so far, almost all give away their location by releasing bright flashes of X-rays as they interact with their close environment. This particular black hole only showed itself once the scientists studied the gravitational effects it had on nearby bodies.

That means we could find many more.

"There must be hundreds of millions of black holes out there, but we know about only very few," said Rivinus. "Knowing what to look for should put us in a better position to find them."

In fact, astronomers have already spotted early evidence of a second system, called LB-1, that also is made up of three bodies like HR 6819.

"LB-1 is a bit further away from Earth but still pretty close in astronomical terms, so that means that probably many more of these systems exist," Marianne Heida, postdoctoral fellow at ESO and co-author of the paper, said in the statement.

Read This Next
Star War
Scientists Are Trying to Figure Out How to Kill Stars with Black Holes
Star Stream
Something Is Ripping Apart the Nearest Star Cluster to Earth
EHT Tu, Black Hole
Astronomers Release Stunning New Image of Black Hole
Congrats!
Nobel Prize Winner on Falling Into a Black Hole: "I Would Not Want To"
Not Quite 24 Frames Per Second
Astrophysicists Release Landmark "Movie" of Wobbling Black Hole
More on Hard Science
Warped Tour
Thursday on futurism
Professor Believes Door to Warp Drive May Lie With Ethylene Glycol
Sky Bursts
Thursday on the byte
Astronomers Intrigued by 25 Mysterious Repeating Radio Signals From Deep Space
Tractor Beam
Jan 26 on the byte
Scientists Build Working Tractor Beam, Although It's Comically Tiny
READ MORE STORIES ABOUT / Hard Science
Keep up.
Subscribe to our daily newsletter to keep in touch with the subjects shaping our future.
+Social+Newsletter
TopicsAbout UsContact Us
Copyright ©, Camden Media Inc All Rights Reserved. See our User Agreement, Privacy Policy and Data Use Policy. The material on this site may not be reproduced, distributed, transmitted, cached or otherwise used, except with prior written permission of Futurism. Articles may contain affiliate links which enable us to share in the revenue of any purchases made.
Fonts by Typekit and Monotype.