The Asteroid With Its Own Natural Satellite 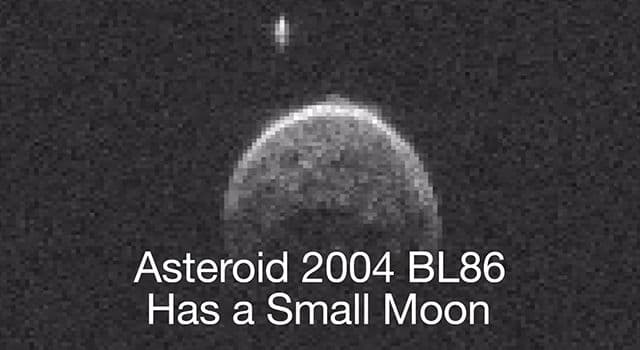 The 20 individual images used in the movie were generated from data collected at Goldstone on Jan. 26, 2015. They show the primary body is approximately 1,100 feet (325 meters) across and has a small moon approximately 230 feet (70 meters) across. In the near-Earth population, about 16 percent of asteroids that are about 655 feet (200 meters) or larger are a binary (the primary asteroid with a smaller asteroid moon orbiting it) or even triple systems (two moons). The resolution on the radar images is 13 feet (4 meters) per pixel.

The trajectory of asteroid 2004 BL86 is well understood. Monday's flyby was the closest approach the asteroid will make to Earth for at least the next two centuries. It is also the closest a known asteroid this size will come to Earth until asteroid 1999 AN10 flies past our planet in 2027.

Radar is a powerful technique for studying an asteroid's size, shape, rotation state, surface features and surface roughness, and for improving the calculation of asteroid orbits. Radar measurements of asteroid distances and velocities often enable computation of asteroid orbits much further into the future than if radar observations weren't available.

NASA places a high priority on tracking asteroids and protecting our home planet from them. In fact, the U.S. has the most robust and productive survey and detection program for discovering near-Earth objects (NEOs). To date, U.S. assets have discovered over 98 percent of the known NEOs.

In addition to the resources NASA puts into understanding asteroids, it also partners with other U.S. government agencies, university-based astronomers, and space science institutes across the country, often with grants, interagency transfers and other contracts from NASA, and also with international space agencies and institutions that are working to track and better understand these objects.

NASA's Near-Earth Object Program at NASA Headquarters, Washington, manages and funds the search, study and monitoring of asteroids and comets whose orbits periodically bring them close to Earth. JPL manages the Near-Earth Object Program Office for NASA's Science Mission Directorate in Washington. JPL is a division of the California Institute of Technology in Pasadena.

In 2016, NASA will launch a robotic probe to one of the most potentially hazardous of the known NEOs. The OSIRIS-REx mission to asteroid (101955) Bennu will be a pathfinder for future spacecraft designed to perform reconnaissance on any newly discovered threatening objects. Aside from monitoring potential threats, the study of asteroids and comets enables a valuable opportunity to learn more about the origins of our solar system, the source of water on Earth, and even the origin of organic molecules that led to the development of life.

NASA also continues to advance the journey to Mars through progress on the Asteroid Redirect Mission (ARM), which will test a number of new capabilities needed for future human expeditions to deep space, including to Mars. This includes advanced Solar Electric Propulsion -- an efficient way to move heavy cargo using solar power, which could help pre-position cargo for future human missions to the Red Planet. As part of ARM, a robotic spacecraft will rendezvous with a near-Earth asteroid and redirect an asteroid mass to a stable orbit around the moon. Astronauts will explore the asteroid mass in the 2020's, helping test modern spaceflight capabilities like new spacesuits and sample return techniques. Astronauts at NASA's Johnson Space Center in Houston have already begun to practice the capabilities needed for the mission.