OSIRIS-REx Update: NASA is Going to an Asteroid to bring Back Samples 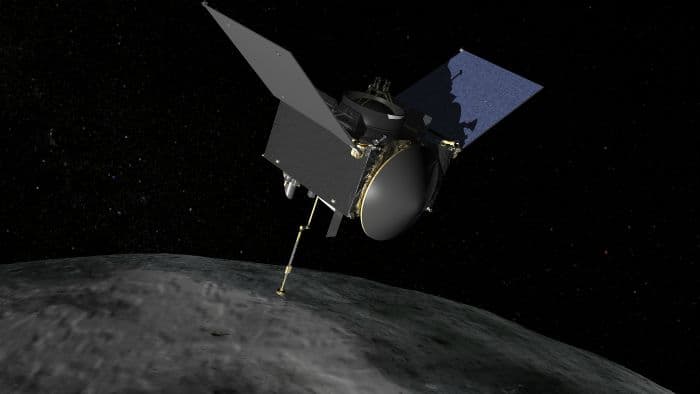 In our continued quest to understand the origins of life, soon, NASA will be taking us to asteroids.

NASA’s Origins, Spectral Interpretation, Resource Identification, Security, Regolith Explorer (OSIRIS-REx. Phew. Long name.) mission is gearing up for the exciting journey to the asteroid Bennu. The spacecraft is currently being assembled in order to bring back valuable surface material from the asteroid. To accurately complete this task, the probe will need highly-advanced scientific instruments to precisely identify interesting organic-rich compounds—compounds that could help us understand the origins of life (notably, the asteroid is likely rich in carbon, a key element in the organic molecules necessary for life).

And of course, we will need to know exactly where to go when we get there, which is why one of the instruments is the OSIRIS-REx Visible and Infrared Spectrometer (OVIRS), a visible-midinfrared (0.4-4.3 µm) spectrometer that will be used to take spectra of the surface of Bennu and allow the science team to construct a spectral map of the asteroid. This was lately installed on the spacecraft.

“We will use data from OVIRS both to understand the geochemistry of Bennu’s surface and to help the science team to select the most scientifically interesting and organic-rich locations on Bennu to sample,” Jason P. Dworkin, OSIRIS-REx’s  Project Scientist at NASA’s Goddard Space Flight Center, told From Quarks to Quasars. “This is achieved by using OVIRS to create a ‘science map’ of Bennu.  There will also be other maps created by other instruments to help establish the locations safest for the spacecraft, most accessible for navigation, and most samplable by the TAGSAM [Touch-And-Go Sample Acquisition Mechanism] sampling system.”

So, how will all of this work? How will we identify what is an interesting area to investigate?

Ultimately, it all has to do with light. OVIRS will split the light received from Bennu into its component wavelengths, much like a prism can split sunlight into a visible rainbow. Different chemicals have unique spectral signatures, so different chemicals can be identified this way.

OVIRS spectra will identify volatile and organic-rich regions on Bennu. The instrument’s spectral ranges and resolution will allow the creation of surface maps of mineralogical and molecular components including carbonates, silicates, sulfates, oxides, absorbed water, and a wide range of organic molecules. “OVIRS will be able to detect organic chemicals and the science team is keen to study the organic chemicals in the returned sample,” Dworkin said.

“OVIRS will observe Bennu from a point-source down to the sub-centimeter at the sampling site,” Dworkin revealed.

The spectrometer can observe the entire surface of Bennu over a wide range of phase angles of 3 degrees or less during the asteroid survey. Typical observations will provide global sampling of the surface with a spatial resolution of 20 meters at a fixed phase angle for measurements from 5-km altitude.

OVIRS will be supported by the OSIRIS-REx Thermal Emission Spectrometer (OTES) which will also provide mineralogy of the surface and contribute to the science map. It also can measure temperature and use the change in temperature with time of day on Bennu to deduce grain size.

Dworkin believes that the data collected by these instruments will help us understand Bennu, and when compared to light curves from other asteroids better understand them.  Furthermore, we will have all this information on the sampling site, then compare it to the sample returned and be able to compare all of this to the meteorite collections on Earth.

OSIRIS-REx will be launched in 2016. Once within three miles of the asteroid in 2018, the spacecraft will begin six months of comprehensive surface mapping. The science team then will pick a location from where the spacecraft's arm will take a sample. It will return at least a 2.1-ounce sample to Earth in 2023. OSIRIS-REx will be the first U.S. mission to carry samples from an asteroid back to Earth.

The spacecraft is currently in the assembly and testing phase at Lockheed Martin’s facility outside of Denver, Colorado. OVIRS and OTES instruments have already arrived at the facility. They will be co-aligned so they will all observe the same point on Bennu. The entire spacecraft needs yet to be shaken, heated, cooled, and subjected to electronic interference to be sure it will work to perfection in the harsh environment of space.