The Journey to Mars: Our Quest for the Red Planet 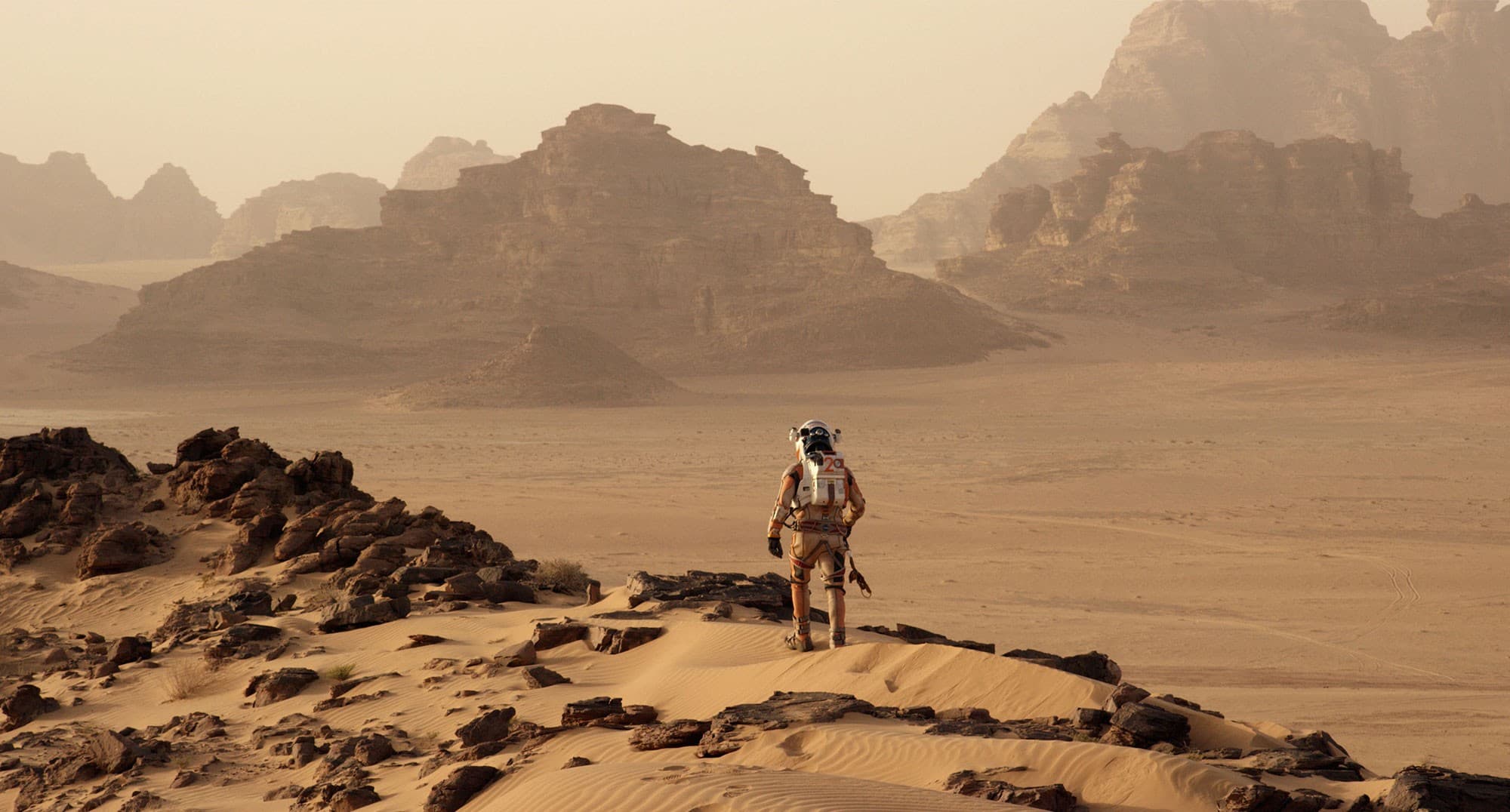 Ultimately, it looks ahead to where we might be in the next few decades, moving the story forward into the 2030s, when NASA astronauts are regularly traveling to Mars and living on the surface.

It's a notion that every science lover dreams about, but what would it take to really get us there?

Well, although the action takes place 20 years in the future, NASA is already developing many of the technologies that appear in the film (and in the book). Indeed, NASA has been gearing up for a manned mission to Mars for some time now. So take a moment to compare the fictional with the factual, and see what "futuristic" technology we already have today, what we'll need to get to Mars, and just how viable the journey really is.

On the surface of Mars, Watney spends a significant amount of time in the habitation module -- the Hab -- his home away from home. Future astronauts who land on Mars will need such a home to avoid spending their Martian sols lying on the dust in a spacesuit.

HERA is a self-contained environment that simulates a deep-space habitat. The two-story habitat is complete with living quarters, workspaces, a hygiene module and a simulated airlock. Within the module, test subjects conduct operational tasks, complete payload objectives and live together for 14 days (soon planned to increase to up to 60 days), simulating future missions in the isolated environment.

On Aug. 28, the fourth Hawaii Space Exploration and Analog and Simulation mission began. The 6 scientists inside will spend a full year inside an isolated, solar-powered dome atop the Mauna Loa volcano. Their goal: Prepare humans for life on Mars. So in this respect at least, we are well on our way.

Today, astronauts on the International Space Station have an abundance of food delivered to them by cargo resupply vehicles, including some from commercial industries. On Mars, humans would not be able to rely on resupply missions from Earth – even with express delivery they would take at least nine months. For humans to survive on Mars, they will need a continuous source of food. They will need to grow crops.

Watney turns the Hab into a self-sustaining farm in “The Martian,” making potatoes the first Martian staple. But how viable is this, really?

Well, today, in low-Earth orbit, lettuce is the most abundant crop in space (not nearly as hearty or sustaining as the potato, I'm afraid). Aboard the International Space Station, Veggie is a deployable fresh-food production system.

Using red, blue, and green lights, Veggie helps plants grow in pillows, small bags with a wicking surface containing media and fertilizer, to be harvested by astronauts. In 2014, astronauts used the system to grow “Outredgeous” red romaine lettuce and just recently sampled this space-grown crop for the first time. This is a huge step in space farming, and NASA is looking to expand the amount and type of crops to help meet the nutritional needs of future astronauts on Mars. However, at this juncture, we haven't figured out how people can live off of lettuce for a year...because it's simply not possible. Still, we are at least taking the first tentative steps, and more research is scheduled over the coming years.

There are no lakes, river or oceans on the surface of Mars, and sending water from Earth would take more than nine months. Astronauts on Mars must be able to create their own water supply. The Ares 3 crew does not waste a drop on Mars with their water reclaimer, and Watney needs to use his ingenuity to come up with some peculiar ways to stay hydrated and ensure his survival on the Red Planet.

On the International Space Station, it is the same. No drop of sweat, tears, or even urine goes to waste. The Environmental Control and Life Support System recovers and recycles water from everywhere: urine, hand washing, oral hygiene, and other sources. Through the Water Recovery System (WRS), water is reclaimed and filtered, ready for consumption. One astronaut simply put it, “Yesterday’s coffee turns into tomorrow’s coffee.”

Liquid presents some tricky problems in space. The WRS and related systems have to account for the fact that liquids behave very differently in a microgravity environment. The part of the WRS that processes urine must use a centrifuge for distillation, since gases and liquids do not separate like they do on Earth.

NASA is continuing to develop new technologies for water recovery. Research is being conducted to advance the disposable multifiltration beds (the filters that remove inorganic and non-volatile organic contaminants) to be a more permanent component to the system. Brine water recovery would reclaim every drop of the water from the “bottoms product” leftover from urine distillation. For future human-exploration missions, crews would be less dependent on any resupply of spare parts or extra water from Earth

Interestingly, technology behind this system has been brought down to Earth to provide clean drinking water to remote locations and places devastated with natural disasters.

Food, water, shelter: three essentials for survival on Earth. But there's a fourth we don't think about much, because it's freely available: oxygen. On Mars, Watney can’t just step outside for a breath of fresh air To survive, he has to carry his own supply of oxygen everywhere he goes. But first he has to make it. In his Hab he uses the “oxygenator,” a system that generates oxygen using the carbon dioxide from the MAV (Mars Ascent Vehicle) fuel generator.

On the International Space Station, the astronauts and cosmonauts have the Oxygen Generation System, which reprocesses the atmosphere of the spacecraft to continuously provide breathable air efficiently and sustainably. The system produces oxygen through a process called electrolysis, which splits water molecules into their component oxygen and hydrogen atoms. The oxygen is released into the atmosphere, while the hydrogen is either discarded into space or fed into the Sabatier System, which creates water from the remaining byproducts in the station's atmosphere.

Oxygen is produced at more substantial rate through a partially closed-loop system that improves the efficiency of how the water and oxygen are used. NASA is working to recover even more oxygen from byproducts in the atmosphere to prepare for the journey to Mars.

The Martian surface is not very welcoming for humans. The atmosphere is cold and there is barely any breathable air. An astronaut exploring the surface must wear a spacesuit to survive outside of a habitat while collecting samples and maintaining systems.

Mark Watney spends large portions of his Martian sols (a sol is a Martian day) working in a spacesuit. He ends up having to perform some long treks on the surface, so his suit has to be flexible, comfortable, and reliable.

NASA is currently developing the technologies to build a spacesuit that would be used on Mars, as the current ones are rather bulky. Engineers consider everything from traversing the Martian landscape to picking up rock samples.

The Z-2 and Prototype eXploration Suit, NASA’s new prototype spacesuits, help solve unique problems to advance new technologies that will one day be used in a suit worn by the first humans to set foot on Mars. Each suit is meant to identify different technology gaps – features a spacesuit may be missing – to complete a mission. Spacesuit engineers explore the tradeoff between hard composite materials and fabrics to find a nice balance between durability and flexibility.

One of the challenges of walking on Mars will be dealing with dust. The red soil on Mars could affect the astronauts and systems inside a spacecraft if tracked in after a spacewalk. To counter this, new spacesuit designs feature a suitport on the back, so astronauts can quickly hop in from inside a spacecraft while the suit stays outside, keeping it clean indoors.

Once humans land on the surface of Mars, they must stay there for more than a year, while the planets move into a position that will minimize the length of their trip home. This allows the astronauts plenty of time to conduct experiments and explore the surrounding area, but they won’t want to be limited to how far they can go on foot. Astronauts will have to use robust, reliable and versatile rovers to travel farther.

In "The Martian," Watney takes his rover for quite a few spins, and he even has to outfit the vehicle with some unorthodox modifications to help him survive.

On Earth today, NASA is working to prepare for every encounter with the Multi-Mission Space Exploration Vehicle (MMSEV). The MMSEV has been used in NASA’s analog mission projects to help solve problems that the agency is aware of and to reveal some that may be hidden. The technologies are developed to be versatile enough to support missions to an asteroid, Mars, its moons and other missions in the future. NASA’s MMSEV has helped address issues like range, rapid entry/exit and radiation protection. Some versions of the vehicle have six pivoting wheels for maneuverability. In the instance of a flat tire, the vehicle simply lifts up the bad wheel and keeps on rolling.

Slow and steady wins the race, and ion propulsion proves it.

In “The Martian,” the Ares 3 crew lives aboard the Hermes spacecraft for months as they travel to and from the Red Planet, using ion propulsion as an efficient method of traversing through space for over 280 million miles. Ion propulsion works by electrically charging a gas such as argon or xenon and pushing out the ions at high speeds, about 200,000 mph. The spacecraft experiences a force similar to that of a gentle breeze, but by continuously accelerating for several years, celestial vessels can reach phenomenal speeds. Ion propulsion also allows the spacecraft to change its orbit multiple times, then break away and head for another distant world.

This technology allows modern day spacecraft like NASA’s Dawn Spacecraft to minimize fuel consumption and perform some crazy maneuvers. Dawn has completed more than five years of continuous acceleration for a total velocity change around 25,000 mph, more than any spacecraft has accomplished on its own propulsion system. Along the way, it has paid humanity's first visits to the dwarf planet Ceres and the asteroid Vesta.