Are there still undiscovered planets in the Solar System? 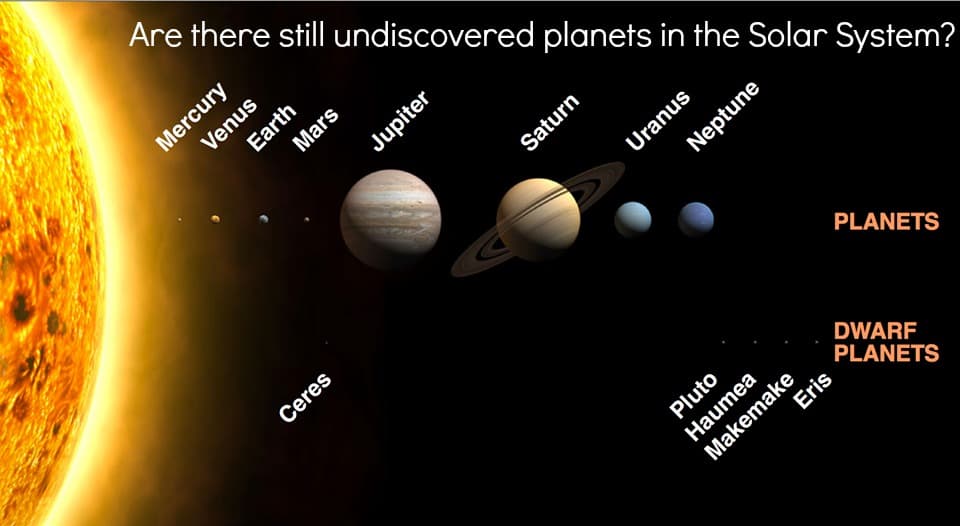 Question: Is it possible that there are planets in the Solar System that we don't know about? For example, in the Kuiper Belt or Oort Cloud.

Answer: First, I should clarify that a "planet" is simply an object (that is not a moon) that orbits the Sun. There are different categories of "planet" such as a major planet (Earth/Jupiter), dwarf planet (Pluto/Ceres), and minor planet (asteroids/comets). So, technically speaking, there are plenty of undiscovered planets out there since there are still loads of undiscovered asteroids and comets.

However, when most people say "planet" they are referring to major planets, so for the duration of this article, I'll use the two terms interchangeably. So, are there still undiscovered planets in the solar system? If we go by the traditional definition for "planet" then the answer is both ‘not really’ and ‘sure, why not’.

Let me elaborate. It’s important to realize that “planet” is, more or less, an arbitrary classification for objects that we use to make our lives easier (OK, it's not *really* arbitrary since objects must display similar properties to one another). Astronomy is an observation-based science, so we need to be able to describe what we see. From this, we have classifications of objects in the cosmos such as galaxy, nebula, planet, asteroid, and star, among many others (obviously). We also have sub classifications for those terms to further define what we are talking about (terrestrial planet, reflection nebula, red giant [star] etc.). To define what a “planet” is, the International Astronomical Union come up with the following definition in 2006:

1) A planet must orbit the Sun.

2) A planet needs enough gravity to pull itself into a sphere.

3) A planet needs to have cleared out its orbit of other objects.

You also need to understand how planets are discovered, which basically falls into three categories; direct observation, gravitational effect, and planetary transits. Direct observation is easy to understand, you directly observe the planet in the same way we directly observe Mars, Jupiter, or even a handful of other exoplanets. A planetary transit is when a planet passes in front of its host star (or, really, when it passes in front of anything) and blocks some of the light, allowing us to see its presence – most of the exoplanets we have discovered have been discovered using this method. Gravitational effect is basically seeing the gravitational influence of one body on another – Neptune was discovered by the effect it had on Uranus.

As such, we can predict if there are any undiscovered planets in our solar system. We know that there aren’t any planets of sizable mass in the Kuiper belt (and, if there were, they should be classified as a dwarf planet because of point number three in the IAU planet definition). All of the gravity of the Kuiper belt is accounted for and our equations work just fine for the region.

The Oort cloud is actually a hypothetical construct. If it exists, it inhabits the region between 1-2 light years away from our Sun. The cloud helps to answer some questions about comets, but we don’t know whether or not it actually exists, or much else about it. The region you need to focus on is the area between the Kuiper belt and the Oort cloud.

It’s certainly possible that there are undiscovered terrestrial planet sized objects out there. There are almost certainly many dwarf planets in the outskirts of our Solar System. From an evidence standpoint, we don’t have any reason to believe there are planets beyond the Kuiper belt, but from a theoretical perspective we don’t have any reason to believe they can’t be there. Who knows? Maybe, one day, we’ll have nine planets again!