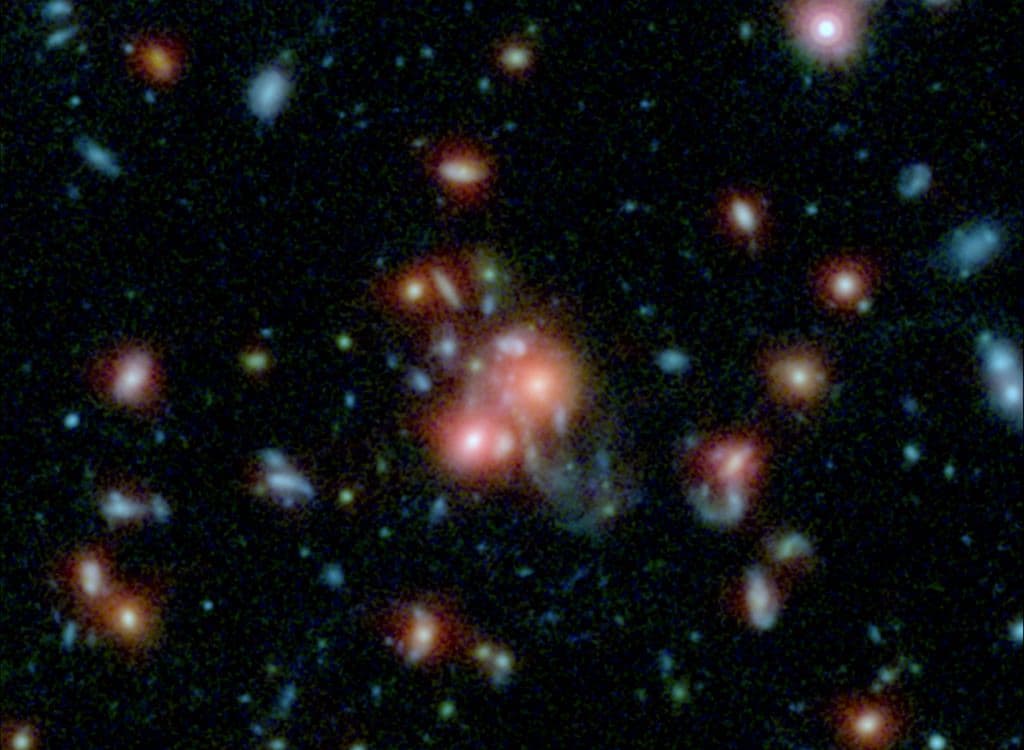 A large cluster of high-mass galaxies, collectively known as SpARCS 1049+56, can be seen in a new image from NASA. Captured using the firepower of Hubble and Spitzer, this multi-wavelength composite paints the cluster's features in optical and infrared light.

All of the galaxies in the cluster are anchored by the largest and most massive member, which is located near the center of the frame (in red). They move around each other like bees and a hive, though their interactions prove important in dictating the features we see here.

Most significant are those astronomers call "beads on a string." Simply put, these knot-like features are regions where gas clumped, collapsed and ultimately triggered the formation of new stars. Such activity is normal when multiple galaxies live in close proximity to one another, but the beads on a string phenomenon—or the mechanism behind it—is rare.

The takeaway is that galaxies within the center of clusters can fatten themselves up by stealing material from nearby companions, just as colliding galaxies often do. Only, the star formation activity doesn't necessarily take place within the galaxy, but outside of it.

Astonishingly, the cluster, which is believed to be 9.8 billion light-years from Earth, appears to be churning out new stars at a fervent rate. Astronomers estimate that, each year, 800 stars weighing as much as the Sun take shape. In contrast, our galaxy produces stars 800 times slower.

If you think that's impressive, note that it weighs over 400 trillion Suns.