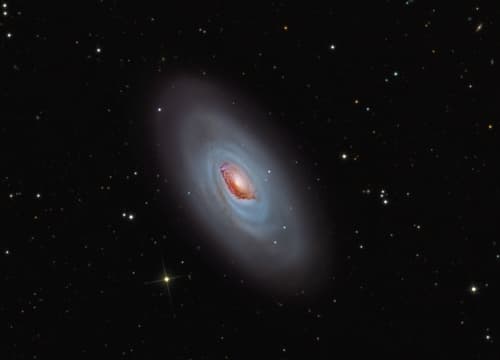 Meet Messier 64 (M64): a galaxy that lurks more than 17 million light-years from Earth in the constellation of Coma Berenices. Clearly, this galaxy is a stunner, but it's also a good case example of how nicknames, like looks, can be deceiving. You see, M64 has many nicknames, which include The Black Eye Galaxy and the Evil Eye Galaxy, but its most famous moniker is undoubtedly 'Sleeping Beauty.' Only the latter word applies, as this galaxy is anything but catatonic.

In fact, it's one of the more active and bizarre galaxies we've cataloged. One survey conducted in the early 90's showed that, for starters, all of the stars circling the galaxy's central nucleus rotate in the same direction (clockwise), while all of the gas and dust filling the voids between them rotate in the opposite direction (counter-clockwise). As a result, in the region where the two concentric, counter-rotating forces meet — known as the shear region, which spans some 40,000 light-years in M64 and is brownish red in color —  fiercer-than-normal star formation activity is sparked.

Astronomers theorize that this strange zone popped up in the aftermath of a galactic merger; perhaps with one of M64's satellite galaxies that spun in a retrograde orbit (an event that took place over a billion years ago). Now that the dust has settled (literally and metaphorically), the only apparent evidence left behind lurks there..