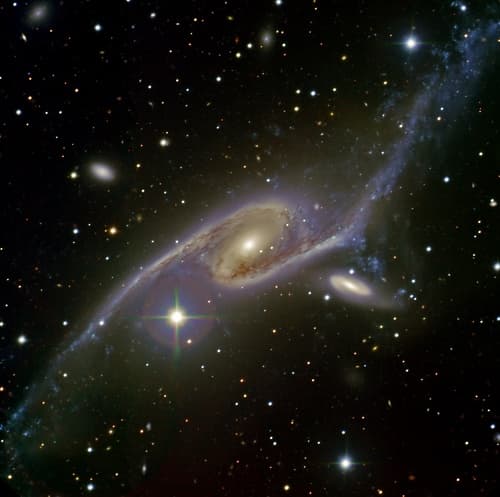 This beauty, dubbed NGC 6872, is a spiral galaxy found more than 200 million light-years from Earth in the constellation of Pavo. As you can see, the galaxy has undergone a bit of turbulence over the last several millions of years, turbulence caused by NGC 6872's on-going duel with another galaxy that wandered too close to it. The interactions resulted in the galaxy's peculiar shape.

The culprit, a smaller galaxy called IC 4970, can be seen below and to the right of NGC 6872's immense core. And when I say immense, I mean IMMENSE. NGC 6872 is purported to be about four or five times larger than our own galaxy, which extends more than 100,000 light-years across. The given estimate for the former puts it at 522,000 light-years across (making it the largest spiral galaxy discovered to date)