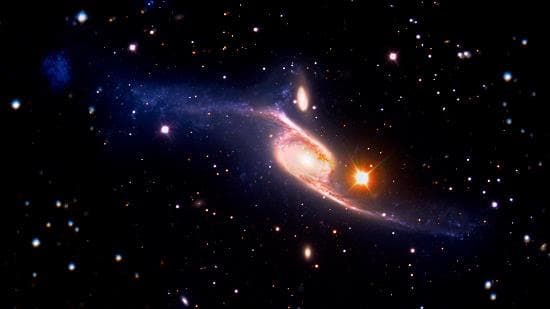 What made NGC 6872 so large? According to calculations, hundreds of millions of years ago, a nearby galaxy (IC 4970) passed by NGC 6872. The two bodies were close enough that NGC 6872 was stretched and pulled into the behemoth that it is today. The gravitational interactions between these galaxies further expanded NGC 6872 by producing new star-forming regions, where stellar objects much younger than the other stars are now being born. In fact, without these regions of infant stars, NGC 6872 would not have its current number-one ranking.

Oddly enough, the same gravitational interactions that made NGC 6872 so enormous will also bring about the galaxy’s death. Of course, galaxies can’t actually die… but they can be ripped apart.

And that’s exactly what’s happening to NGC 6872. Due to the gravitational pull of IC 4970, one of NGC 6872’s massive arms seems to be spinning off to form its own dwarf galaxy. And in about four billion years, something similar will happen to our own galaxy. Recently, an analysis of Hubble measurements has revealed that the Milky Way is on a collision course with the Andromeda Galaxy. So, if NGC 6872 is a comparable example, some time in the future, it is plausible that we might be a part of the largest spiral galaxy.

Of course, given the 4 billion year time-frame, it’s highly unlikely that we will be around to celebrate this achievement.

Read This Next
Hall Effect
Test Suggests Ion Thrusters Could Power Crewed Interplanetary Missions
Shoo
Scientists Warn Giant Asteroid Is Actually Swarm, Nearly Impossible to Destroy
What Does It All Mean?
The Second Alien Probe We Detect May Be Particularly Bizarre, Scientist Says
A Sip of Opal
NASA Discovers Precious Gemstones on Mars
And He Scores
We Are Completely Puzzled by This Video of a Chinese Astronaut Playing Ping-Pong in Space
More on Off World
Take Cover
4:11 PM on the byte
Space Startup Blows Up Another Giant Inflatable Space Station Module
Rock Blast
3:28 PM on the byte
Scientists Say There's an Upside to Those Rocks That Keep Bludgeoning the James Webb
Meathead Theory
2:57 PM on the byte
Professor Receives Insane Email Claiming "Biological" Green Comet Is Giving Off "Meat Smoke"
READ MORE STORIES ABOUT / Off World
Keep up.
Subscribe to our daily newsletter to keep in touch with the subjects shaping our future.
+Social+Newsletter
TopicsAbout UsContact Us
Copyright ©, Camden Media Inc All Rights Reserved. See our User Agreement, Privacy Policy and Data Use Policy. The material on this site may not be reproduced, distributed, transmitted, cached or otherwise used, except with prior written permission of Futurism. Articles may contain affiliate links which enable us to share in the revenue of any purchases made.
Fonts by Typekit and Monotype.