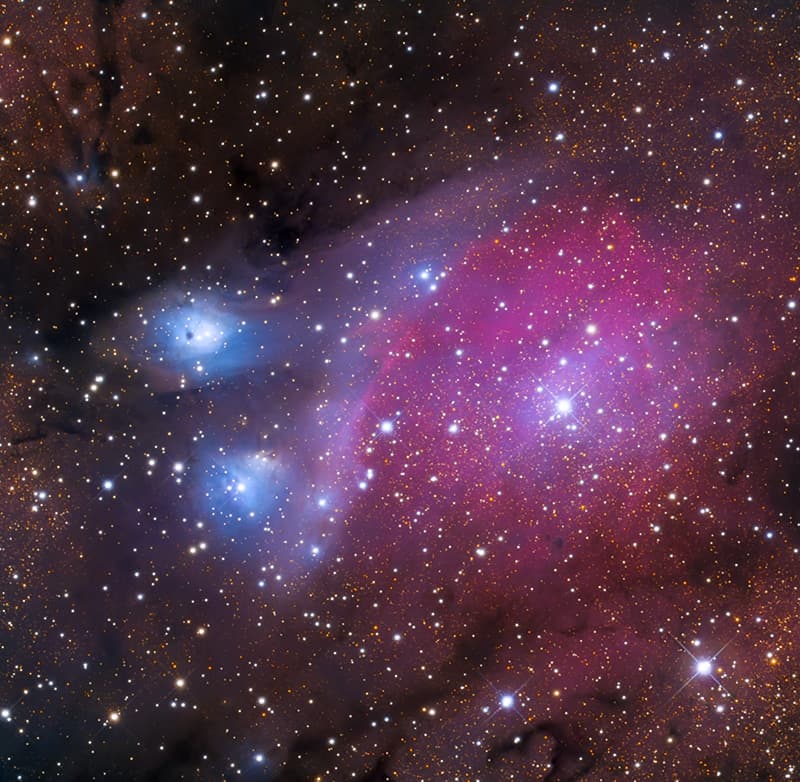 If you take a trip to a remote region with little light pollution, you'll see the Milky Way with stunning clarity, and the first thing you'll probably notice (once you manage to pick your jaw up from the floor, that is) is the sheer concentration of interstellar dust blocking our view of the galaxy's center. This same dust is just as relevant in small-scale nebulae, like this one. While the focal objects are in clear view, the background stars are obscured by thick tendrils of dust, which form a network of inky-looking veins.

The objects in question are two reflection nebulae called NGC 6589 and NGC 6590, and a loose cluster of stars called NGC 6595 (also known as Sharpless 37). The characteristic blue glow is created generated when starlight ricochets off interstellar dust grains, causing the light to scatter in the blue part of the electromagnetic spectrum.

In addition to the cluster and the reflection nebulae, another object is in view: a huge, semi-transparent cloud of gas to which the nebulae connect, resembling a cosmic percentage symbol. This cloud, dubbed IC 1283 (smaller clouds, IC 1284 and IC 4700, are embedded), is comprised of mostly of hydrogen, with bits of dust thrown in for good measure. A source of ultraviolet radiation has ionized this cloud, but it may not in fact be associated with the other three objects.

The whole lot can be found near the galaxy's center toward the constellation of Sagittarius, somewhere around 5,900 light-years from Earth.