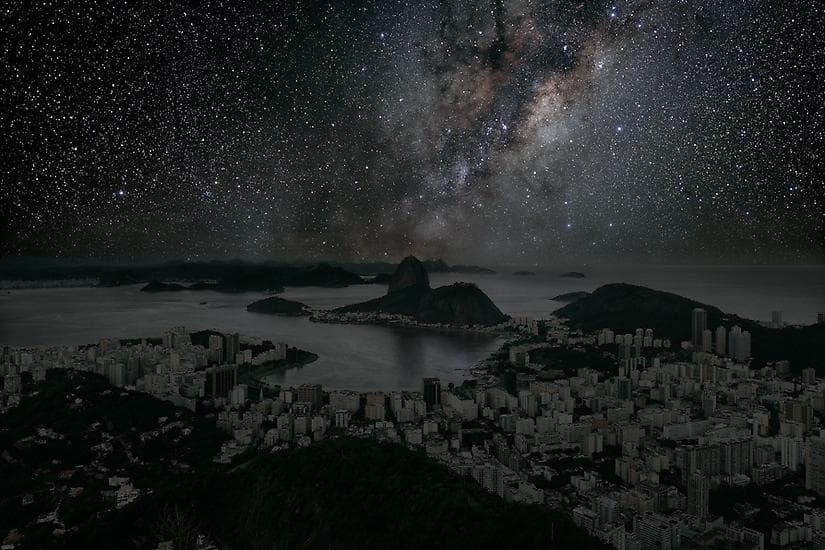 Light pollution and astronomy really don't go hand in hand at all. Since a majority of the world's population lives in built up areas, light pollution is becoming more and more of an issue, especially as the built up areas expand farther and farther out into the countryside. Light pollution may not be noticed quite so much by the younger generation, but those may remember what a truly bright, starry sky used to look like. And it is likely that, over the years, you've noticed a real change in how far development has pushed out from the central business district of your city/town are started to invade places that were once (mostly) uninhabitable.

The light pollution of a city as large as Melbourne can still be seen from 150km (93 miles) away, and it is clearly visible in a long exposure photo.

So with light pollution stretching out as far as it does, how do we deal with it?
I'm going to break this into two parts, that of visual observation and in a photographic sense.

With light pollution there are 4 main things we can do (some ideas are, obviously, much better than others):

Now onto photography: Moving away from the city lights is, by far, the best option. It allows you to photograph the entire sky and not just the individual objects that you happen to be able to see.

But this is not possible for many people, which is why, in astrophotography, filters are a must (especially with the narrowband filters). If you were to ask around, about 50% of people would say that UHC filters are good, while the other 50% say that they're not that useful. However, you can never fully anticipate what conditions you will encounter, so when photographing in light polluted areas, they're better to have than not.

Narrowband filters are amazing in astrophotography (and amazingly necessary). They allow you to take spectacular images of deep sky objects without having to worry about either light pollution from cities or the moon's glow. The reason for this is that they only allow very specific wavelengths of light though. In the case of the O-III filter, it only lets the light from ionised oxygen in while blocking pretty much all other light. Because of the way that these work, some of the best images taken by amateur astrophotographers have come from heavily light polluted locations. Sadly however, this is beyond the reach of many aspiring photographers, as these types of setups don't come cheap.

To Sum: Observing can be done in light polluted areas, it can be done in cities, and even without any filers at all. However (obviously), when observing, light pollution does limit what you can observe, so it may just be a matter of being selective about what you view on any given night.

If there is a full moon, don't expect to be able to see much of any deep sky objects, a full moon can do far more damage than a city's light pollution. Instead, just look at the moon or the planets, bright double stars (there are quite a few bright ones up there in the sky). If you have a chance to go out for a night away from a city without the moon lighting up the sky, take advantage of it, remember you don't have to travel too far to get some amazing views of the sky.

Also remember that filters are an aid, they aren't the be all end all. Using a UHC filter near a city will make the object look at a little better but just keep in mind... NOTHING beats a darker sky 🙂