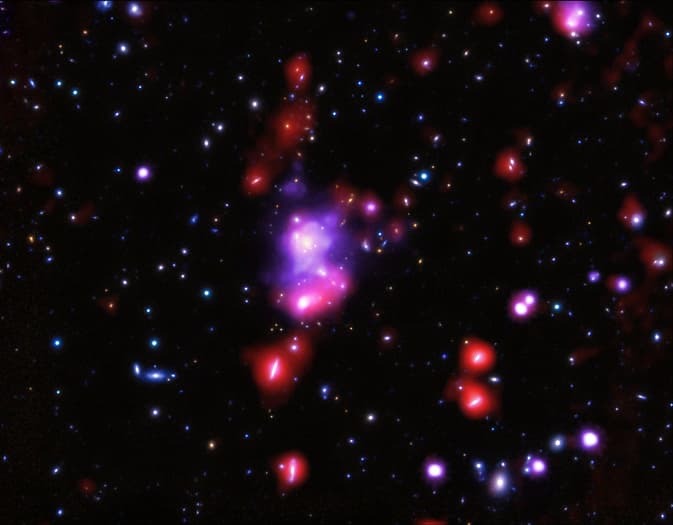 Drawn together by the force of gravity, galaxies are known for their tendency to merge, but they also collect and form galaxy clusters, which generally make up the largest structures in the universe. Intrinsically, these structures can be used for their gravitational lensing capabilities, but more than that, they can shed light on the universe's greatest mysteries (like dark matter).

Galaxy clusters also make a great subject for remarkably beautiful pictures. This is one galaxy cluster, dubbed XDCP J0044.0-2033, seen at infrared, x-ray and optical wavelengths. Each wavelength tells us something important about the cluster, which has been given the affectionate nickname 'Gioiello.' Optical data (taken by the Subaru telescope in Hawaii) shows the galaxies themselves (in red, green and blue); The x-ray data (from Chandra) shows the bridges of superheated gas that separate the galaxies (in purple); and the infrared data is used to illuminate the red halos surrounding certain galaxies (from Hershel).

When compiled, all of this data can ultimately be used to derive certain properties of the cluster. They determined that overall, Gioiello — one of the most massive (known) galaxy clusters in the universe — contains the mass of approximately 400 TRILLION Suns, all contained throughout just 6.2 million light-years. At roughly 800 million years old, it's also one of the youngest clusters (our own galaxy is about 18 times older, or 13.4 billion years in age), and one of the most distant (it lurks about 9.5 billion light-years from Earth in the Cetus constellation)).

Above all else, this galaxy cluster will help us better understand the way in which clusters evolve over time.  Also interesting is the fact that astronomers have noted that there is, what appears to be, 'uneven structures" in the gas.