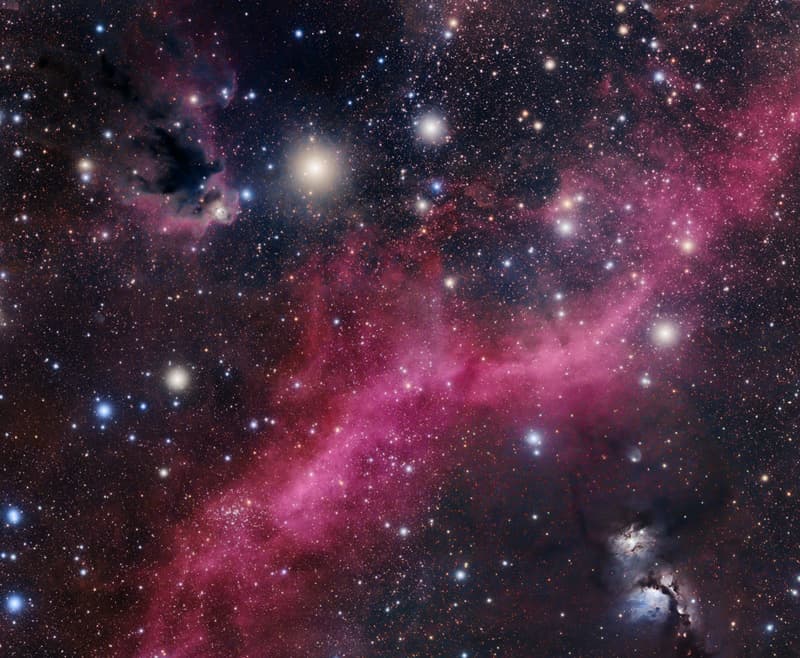 In what's sure to be one of the most incredible images I've come across, we meet a region found about 1,500 light-years from Earth in the constellation of Orion.

This busy star-field contains numerous large and small-scale wonders. First and foremost, we have Barnard's Loop: the river of pinkish-red running from bottom left to top right. It is a large and complex emission nebula that contains many of the most famous nebulae our galaxy has to offer, which include: the Great Orion Nebula and the Horsehead Nebula.

After Barnard's Loop, we have Messier 78 — easily one of the most breathtaking reflection nebulae ever cataloged — pictured in the bottom right.

Like all reflection nebulae, this region is powered by stars surrounded by lots of gas and dust. The dust is so dense in some parts that light simply can't break through,  but in regions where dust is more scarce, when light from embedded stars leaves the surface, it is greeted by a wall of dust, which sends light scattering at the blue end of the electromagnetic spectrum.

Finally, in the top left, we have the Boogeyman Nebula (otherwise known as LDN 1622); a nebula with a harrowing appearance. It's predominantly dust, with a bit of gas mixed in. This gas, in turn, generates emission and reflection nebulae. It's believed to be much closer to Earth than the other regions, hence its larger size.

Ultimately, the Orion Molecular Cloud Complex takes up more than 10º of our sky, making it approximately 20 times more expansive than the full moon in angular diameter (it takes up half a degree of sky by comparison), and this image only scratches the surface. It merely shows a sliver about 2.5 x 4 degrees in all.