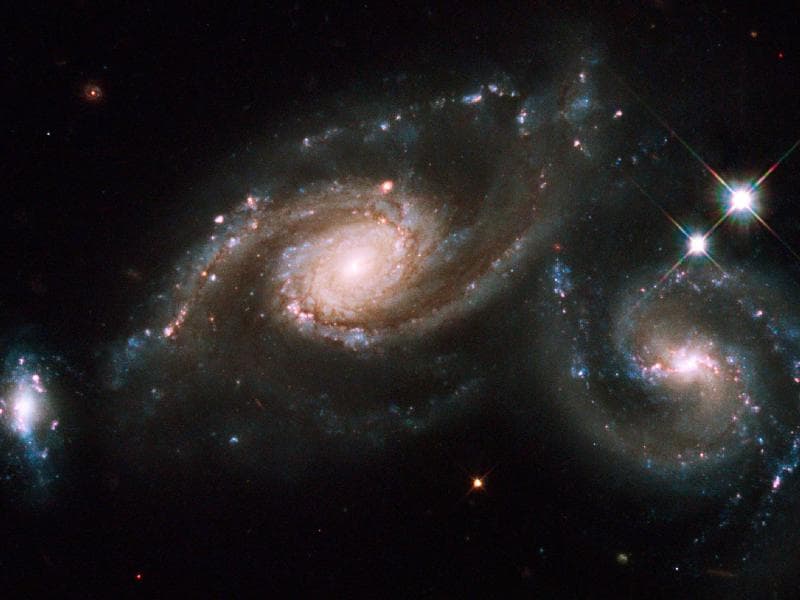 Time and time again, we've seen that colliding galaxies are among the most astoundingly beautiful sights found beyond our galaxy's borders. This galaxy — dubbed Arp 274 — joins Arp 194 near the top of pack, as far as exceptionally beautiful galactic mergers are concerned.

Instead of being the usual two-galaxy pack, Arp 274 (also known as NGC 5679) is a triple galaxy system found about 400 million light-years from Earth in the constellation of Virgo. Two of the three in this trio, the larger two, are experiencing an intense star-burst phase, which sees the number of stars the galaxies churn out in a steep up-rise. The much smaller galaxy (seen on the far left) has seen a slight increase in star formation activity, but nowhere near as powerful as the period the larger galaxies are entangled in.

Hubble's impressive "Wide Field Planetary Camera 2" was used to capture this stellar image of Arp 274. Blue, visible light and infrared filters were combined with a filter that specializes in the isolation of hydrogen emission. The colors are even manipulated to reflect the intensity in which the galaxies, and their combined stellar populations, shine. The regions that appear yellowish in color highlight portions of the galaxies that are swamped with older, more evolved, stars (they are particularly prominent near each galaxy's central bulge). Young, massive and bright stars reside in the blue regions that pervade all of the spiral arms. The pink regions also reflect the birth of new stars, along with the ionized gaseous clouds that we generally associate with star formation activity.

The big, bright stars pictured above the galaxy on the far right are foreground stars that belong to the Milky Way.