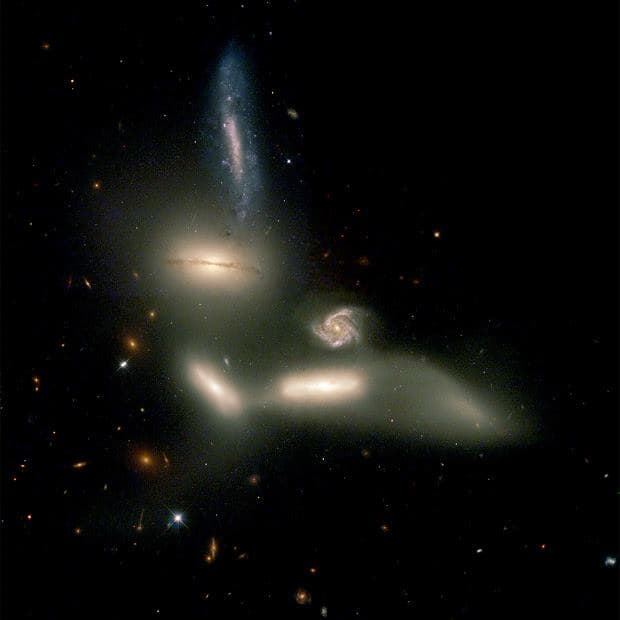 One thing the universe is not lacking is galaxies. We've found billions of them, yet we know there are many more we are not capable of seeing just yet (for a variety of reasons), yet it's pretty typical for galaxies to have millions of light years separating them (our galaxy is more than 2 million light-years from its closest major spiral neighbor, the Andromeda galaxy). But there are exceptions to this: our galaxy itself has several smaller satellite galaxies — like the Large and Small Magellanic Clouds and the Canis Major Dwarf Galaxy — in orbit around it.

This is one of them. Instead of having two semi large galaxies gravitationally interacting before a complete merger, this group of galaxies, known as Seyfert's Sextet, contains a whopping six galaxies (one of them is not a galaxy, but a tidal tail of material, while the other is not participating in the galactic game of twister). All of which are comparatively small in size (about 35,000 light-years in diameter). They all lurk at a distance of about 190 million light-years from our galaxy.

Overall, the galaxies take up less volume than our galaxy, which spans about 100,000 light-years across, does. All will continue to be shaped through tidal interactions, perhaps eventually merging to create a super galaxy, equipped with a star-making factory.

THE MOST BEAUTIFUL COLLIDING GALAXIES: